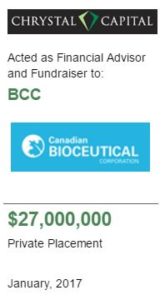 We wrote last week about The Canadian Bioceutical Corporation (CSE: BCC) (OTC: CBICF) acquiring Arizona cannabis operations and an option to acquire a Nevada licensed cultivator for $25mm USD, with $15mm USD in cash and the balance as a promissory note. When the deal was announced, the company had indicated that it had raised $27mm USD by selling 181.68mm shares at $0.20 CAD and indicating that the “US$27mm private placement was facilitated by London based Chrystal Capital Partners (www.chrystalcapital.com), and has brought in some influential funds and individuals to the shareholder register.” According to its website, Chrystal Capital, based in London, helps companies raise funds by tapping into its network of family offices that have assets under management typically exceeding $250mm and institutions involved in alternative investing.

In its Form 9, filed on January 26th, BCC disclosed that Chrystal Capital earned a cash fee of $2.43mm and 15.9mm compensation options at $0.20 per share for selling 177.4mm of the shares sold. More interesting was the disclosure by jurisdiction the number of buyers and the amount invested. Only 3.2% of the capital raised came from Canada, where BCC is listed, and only 10.0% was raised in the United States, where the assets BCC purchased are located: 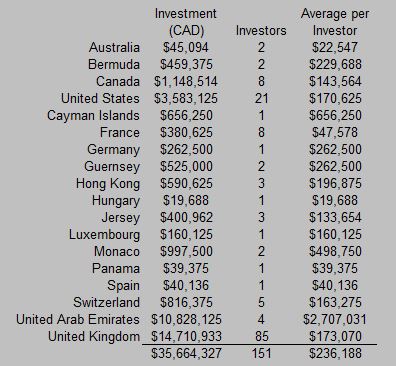 Not surprisingly given that Chrystal Capital is based in London, 41.3% of the capital raised was from UK investors. The second largest source was United Arab Emirates, where 4 investors kicked in an average of $2.7mm CAD, representing 30.4% of the deal.

Before the deal was announced, the stock last traded at $0.105 when the company voluntarily halted trading in January 2016, valuing the company at less than $5mm. The company delisted from the TSX Venture exchange on January 17th before relisting on the CSE on January 27th. The prior business had minimal revenue, large operating losses and a small amount of assets on the balance sheet that were dwarfed by liabilities. The stock had not performed well prior to the halting of trading in early 2016: 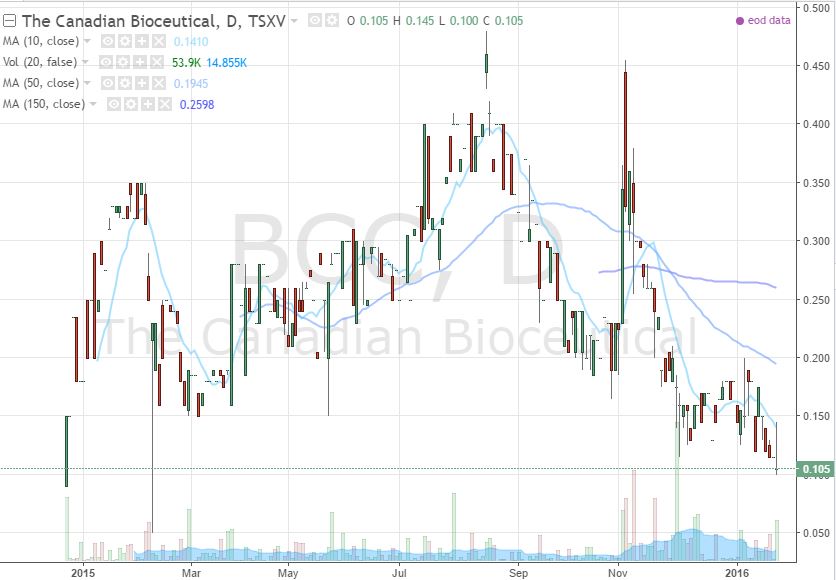 The stock closed at more than 4X the price of the capital raise at $0.20, giving buyers of the private placement, which has a 4-month lock-up, paper gains at the closing price of $116mm CAD or $88mm USD and the company a market cap of $232.5mm CAD on a fully-diluted basis. Chrystal Capital’s compensation options ended the day with intrinsic value of $10.176mm CAD. With fewer than 0.1% of the shares trading, it’s not clear that the rally will be sustainable. If it is, we should expect to see more transactions similar to the BCC deal, with Canadian listed companies acquiring U.S. cannabis assets.