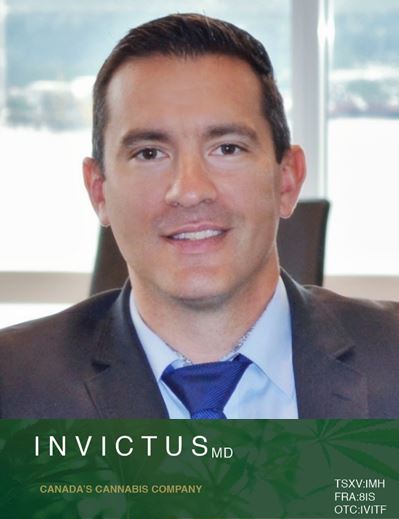 Invictus MD Strategies (TSXV: IMH) (OTC: IVITF) (FRA: 8IS) announced its entry into Canada’s medical cannabis production market through its 1/3 acquisition of A B Labs in Ontario in late 2016, but it now has become a full-fledged participant after acquiring an option to buy Alberta-based Acreage Pharms, which last month gained Health Canada’s 41st ACMPR license. The company, which began trading publicly in 2014, has developed an ancillary business as well, including subsidiary Future Harvest, Smokazon and Cannabis Health. The company, which joined the 420 Investor Cannabis Stock Index at the end of 2016, is one of the 54 currently in the index. To learn more about the company’s recent progress, we interviewed CEO Dan Kriznic.

Dan: I’m a CPA/Chartered Accountant by trade. Initially, I started out working for Deloitte & Touche for a period of 10 years, where I gained experience in many different industries and a general background in business and the importance of cash flow. After Deloitte, I was a CFO and Executive Vice President of an Investment Group in Vancouver that was involved in private education, real estate and care homes. We built Canada’s largest for-profit education company in a period of 4 years with over 1,300 employees and 42 locations spanning many cities across Canada. We exited on some of the assets, at which time I left to incubate Invictus MD. Initially Invictus MD was set out as a licensed producer applicant back in early 2014 but later went on to invest in various verticals in the Cannabis space.

New Cannabis Ventures: You have closed on an ownership position in Canadian licensed producer AB Labs in Ontario, in which you have a ⅓ stake, and you have an option to buy all of Alberta-based Acreage Pharms, which just received its license from Health Canada. You started off focused on ancillary plays. What were you doing, how did you end up owning LPs, and was this the plan or did it evolve?

Dan: Initially, when Invictus started focusing on ancillary segments of the cannabis industry, we wanted to be a conglomerate within the cannabis space. 2015 was a very difficult time for cannabis companies to raise capital. We went public on the CSE in late December 2014 and were able to raise funds through friends and family to acquire a number of smaller assets. Our core asset was an initial 20% stake in Future Harvest. At the time the company was manufacturing nutrients and lighting. We survived 2015 and started down the path of negotiating the sale of the lighting division at Future Harvest to a strategic buyer. We managed to sell the division for gross proceeds of $5 million in March of 2016 and decided to give back to our shareholders and pay a $1 million dividend equivalent to $.07 per share at the time.

During 2015 we quickly made decision to sell off some of our other non cash producing verticals. In summer of 2016, the recognition of licensed producers in Canada started to pick up due to talks again of legalization of cannabis for adult use in Canada. We were not new in the industry and had a great network that helped us identify our first LP acquisition AB Laboratories in Hamilton Ontario. By this time, we decided that we wanted to become Canada’s Cannabis Company and raise capital to acquire LP’s in a minimum of 2 provinces. After negotiating a binding letter of intent with AB Laboratories we quickly raised $12 million at $1.05.

In late January 2017 we then continued to seek out other LP opportunities and was introduced again through our network to Acreage Pharms. Acreage Pharms had received pre-licensing inspection in early January 2017 and required funding for expansion to their existing facility. We quickly jumped on this opportunity and signed a definitive option agreement. Our goal is to exercise that option imminently given the land size for building opportunities. Ideally, cannabis facilities are built for purpose. Acreage Pharms has 150 acres of land that we can build on.

Another pre-licensed applicant that is tied to AB Laboratories is AB Ventures. AB Ventures will be closing on a 100 acre property in Hamilton, Ontario by May 1, 2017. This gives us what we believe to be the largest land package that will be licensed under the ACMPR with all construction built for the purpose of producing Cannabis.

Essentially the initial plan in 2014 was to be a LP in Canada. Invictus evolved into a number of verticals but has now evolved back its roots and will be focused on pure-play LP in Canada under multiple locations.

New Cannabis Ventures: The company has ventured into the United States, with plans to acquire a 60% ownership in a Nevada cultivation. I believe that you also have an option to acquire a 20% stake in a company licensed in the state of Washington. What is your U.S. strategy? Are you at all concerned about federal illegality?

Dan: We want to focus as Canada’s Cannabis Company. At this stage we only have options on assets in the US.

New Cannabis Ventures: Raising capital has been a lot easier in Canada than in the United States. You raised $16.2mm at $1.65 for units in February in a bought deal. How has your ability to find investors improved over the past two years?

Dan: The cannabis market is real, and early entrants with speed to production will have a key advantage. The demand of 600,000 kgs by 2020 under the adult use market plus 150,000 kgs for the medical side is far greater than the current supply. Investors have recognized this and are playing the upside in a big way. The initial 1/3 acquisition of AB Labs and AB Ventures was a stepping stone into the LP space. We raised $12 million on the backing of that deal in December 2016, which included some anchor investors that were also involved in the $16.2mm bought deal.

New Cannabis Ventures: You recently announced that you will be listing on the TSX Venture after having been on the CSE. How will this move benefit Invictus?

Dan: I think the TSXV provides more confidence to certain investors and more buying in the market. We have seen some of this play out with recent volume in our stock. We want investors to know we are part of the overall LP space in Canada. Most of the LP’s are on the TSXV or TSX.

New Cannabis Ventures: Who are some of the key players on your team?

Dan: Phillip Haig is our Chief Science Officer and Horticulturist who has built over 1 million square feet of licensed grow facilities in the US. Currently Phil is working on a 500,000 square foot build out for one of the five licensed in New York. He has been featured on 60 minutes, national geographic and many other publications. Our goal is to build very large facilities and Phil will be key in designing and helping construct those facilities built for purposes of cultivating cannabis.

Larry Heinzlmeir is our VP of Marketing and Communications. We worked together hand in hand for a number of years in building Canada’s largest education company, where he was the Chief Marketing Officer. Branding and sales will be key as we get down the path to production and sale of Cannabis. We are both very operational from that perspective and have operational pasts that work well together, with my strength in finance and Larry’s in sales and marketing. Larry is also heading up our communications strategy for investors, which is key to getting our message out there and telling the story to as many people in the world as possible.

George Kveton recently joined as a director for Invictus. George is a founding partner of LOGSCALE Venture Partners, focused on early and growth stage companies in healthcare. He has in-depth strategic and corporate development experience in fast moving consumer goods. As VP at Japan Tobacco, he led M&A transactions valued at US $1.5B, expansion into in the US and Latin America, and deal origination and execution for emerging products. At Philip Morris, he led two major acquisitions (up to U$1B), readied businesses in Central and Eastern European for EU accession, and facilitated new market entries into Croatia and neighboring countries. His multi-billion dollar private and public company deals are global spanning five continents. He’s a graduate of Queen’s, the executive studies at Berkeley Haas and HBS.

Every hire we make and directors we appoint is strategic to the overall vision of becoming Canada’s Cannabis Company. I find that it’s key to have an operational team that has done this before in other industries. All of the team members offer a different and complementary skill set. We will continue seeking and acquiring top talent to work with the team.

New Cannabis Ventures: Dan, we covered a lot of ground, but is there anything else you would like to add to help our readers better understand the company and its strategic direction?

Dan: As mentioned, we are a new Licensed Producer focused company but not new in the industry. The strategy since early 2014 has always been to be a dominant company in the cannabis space. The team has done this before in other industries. This is key in my opinion. We have recognized a window of opportunity that will likely never present itself again in our lifetime. This is not a dotcom bubble. Cannabis cash flow has been around for decades. We are now finally going to capitalize on this legally and give back to communities in a positive way.

New Cannabis Ventures: Thanks for taking the time to tell the Invictus MD Strategies story. What’s the best way for readers to follow it going forward?

Dan: For those who want to learn more about our company, here are several options: