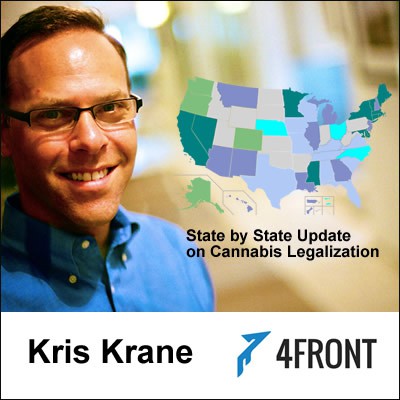 Kris Krane and Matthew Kind touch on the most important states ending prohibition, and what you need to know about each state right now.

Kris was recently nominated for CannAwards 2016 most influential person in the cannabis industry.

Prior to forming 4Front, Kris served as Director of Client Services for CannBe, which was a pioneer in developing best practices within the marijuana industry. At CannBe, Kris, along with a few other on the 4Front Advisors team, worked with many of the top licensed dispensary operators in Northern California.

Kris has dedicated his career to reforming the nation’s failed and misguided drug policies, having served as associate director of NORML from 2000-2005 and executive director of Students for Sensible Drug Policy from 2006-2009. Kris earned a BA degree in political science from American University in 2000.

Kris currently serves on the national board of directors for the National Cannabis Industry Association (NCIA), Common Sense for Drug Policy and Marijuana Majority, as well as the national advisory council for Students for Sensible Drug Policy.