In fiscal 2018 we set new records for sales and volume, introduced brands for the adult-use market, expanded our international presence, commercialized new proprietary cannabis varieties, more than doubled our production capacity and MedReleaf was named Top Licensed Producer at the 2017 Canadian Cannabis Awards. 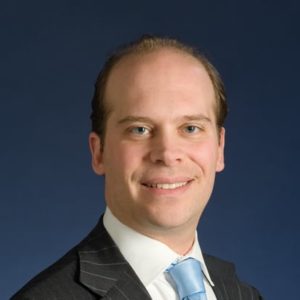 I’m immensely proud of our achievements to build a reputable, respected, and enduring business founded on integrity, high quality and strong execution, and I am confident MedReleaf will bring tremendous value to Aurora, as we combine to create a preeminent global cannabis company. 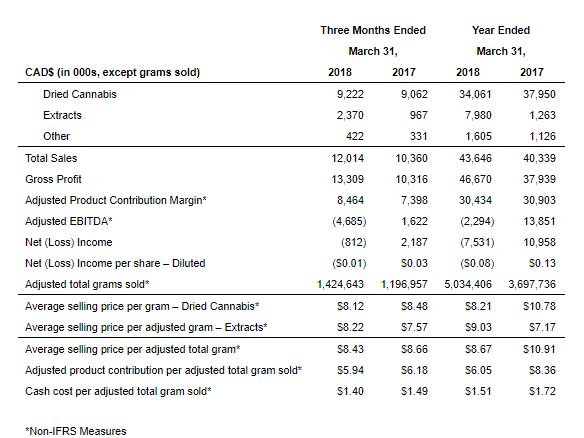 Subsequent to the Fourth Quarter Fiscal 2018:

Sales growth was primarily the result of increased production capacity, patient demand, yield improvements, and the continued growth of cannabis oil extracts for sale. Throughout the year ended March 31, 2018 and 2017, the Company’s Markham Facility was operating at full capacity (based on square footage). In November 2016, Health Canada approved the Company to produce and sell cannabis oil extracts.

Extract sales for the fourth quarter were $2.4 million, an increase of $1.4 million from the prior year period, and represented 20% of total sales. With the launch of topical creams, softgel capsules, future product development initiatives, and growing industry demand, MedReleaf expects sales of extract products to account for an increasing percentage of the Company’s overall revenue in the future.

The following are the Company’s cash production costs, on an adjusted total and per gram sold basis, for the three and twelve months ended March 31, 2018 and 2017, as compared to reported production costs (excluding costs resulting from the fair value of biological assets), which represents cost of sales, in accordance with IFRS:

The following is the Company’s Adjusted Product Contribution Margin as compared to the reported gross profit, which includes fair value adjustments on biological assets in accordance with IFRS, for the three and twelve months ended March 31, 2018 and 2017.

Adjusted product contribution margin for the three months ended March 31, 2018 was $8.5 million, an increase of $1.1 million, compared to $7.4 million for the three months ended March 31, 2017. This increase was due to sales growth which was primarily the result of increased patient demand, yield improvements, and continued growth of cannabis oil extracts for sale.

Adjusted product contribution margin for the year ended March 31, 2018 was $30.4 million or $6.05 per adjusted gram sold, compared to $30.9 million or $8.36 per adjusted gram for the year ended March 31, 2017. This marginal decrease in Adjusted Product Contribution Margin was the result of increased labour costs and depreciation attributable to the scale-up of the Bradford Facility, in addition to both price and volume limits imposed by the Veteran Affairs Canada Policy whereby the Company began to offer discounts to qualifying Veterans to assist with the non-reimbursable portion of their medication. 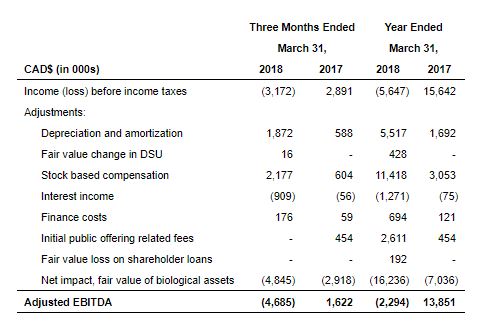 Adjusted EBITDA loss for the three and twelve months ended March 31, 2018 was $4.7 million and $2.3 million, representing a decrease of $6.3 million and $16.1 million, compared to the three and twelve months ended March 31, 2017, respectively. The adjusted EBITDA decrease was mainly due to our investment in the recreational market and its international business initiatives, as well as continuous improvements in R&D activities. As a result, increased operating and overhead expenses, such as advertising and promotion, were incurred for the preparation of the Company’s launch of its recreational brand and other initiatives.

Net loss for the three and twelve months ended March 31, 2018 was $0.8 million and $7.5 million (2017 – net income of $2.2 million and $11.0 million), respectively. The decrease in net income and comprehensive income was primarily due to increased overhead expenses partially offset by increased sales and gross profit as the Company expanded production capacity, specifically driven by fair value gains experienced at Bradford Facility. The main drivers of increased overhead expense for the three and twelve months ended March 31, 2018 were stock option expenses, IPO related costs, business development costs, investments in sales, marketing and brand development, and other G&A expenses incurred to support the current and future growth of the Company.

Inventories as at March 31, 2018 were $32.9 million, an increase of $23.3 million from March 31, 2017.  The increase in inventories was due to increased production, deemed costs arising from fair value gains on biological assets, and the addition of cannabis oil inventory that were previously not valued, partially offset by the fair value adjustment of the carrying value of inventory.

Capital expenditures for the year ended March 31, 2018 were $40.9 million primarily put towards production rooms, building improvements, furniture and other equipment related to the construction and development of the Bradford Facility. MedReleaf is on track to complete its capacity expansion to 35,000 kilograms in production annually in 2018 to support initial demand from the adult-use market.

This news release, along with the unaudited condensed interim consolidated financial statements for the three and twelve month periods ended March 31, 2018 and 2017, including the notes thereto, and the Company’s corresponding management’s discussion and analysis, are available on the Company’s website at www.medreleaf.com and on SEDAR at www.sedar.com.

(b)   Equivalent grams and kilograms

Canada’s most awarded licensed producer, MedReleaf is an R&D-driven company dedicated to innovation, operational excellence and the production of industry leading, top-quality cannabis. Sourced from around the world and carefully cultivated in one of two state-of-the-art ICH-GMP and ISO 9001 certified facilities in Ontario, with a third facility currently in development, a full range of premium MedReleaf products are delivered to the global medical market. We serve the therapeutic needs of patients seeking safe, consistent and effective medical cannabis and provide a compelling product offering for the adult-use recreational market.