“We doubled revenue in fiscal 2017 and we did it profitably – growing Adjusted EBITDA more than threefold,” said Neil Closner, CEO of MedReleaf. “With the successful completion of our IPO in June we have $74 million in financing to help fund our strategic growth initiatives including: expanding our capacity more than five times to support up to 35,000 kilograms of production; scaling our domestic business; developing our recreational brand portfolio; and international expansion, which we believe positions MedReleaf well for future growth and profitability.”

Subsequent to the fiscal 2017 year end, MedReleaf completed the first phase of its Bradford Facility construction project, which included drying, trimming, packaging, shipping, storage and grow rooms with an estimated annual production capacity of 2,800 kilograms of cannabis products. In April 2017, MedReleaf received a cultivation licence from Health Canada pursuant to the Access to Cannabis for Medical Purposes Regulations in respect of the Company’s Bradford Facility and the Company has commenced production at such facility.

On June 7, 2017, MedReleaf closed its initial public offering and secondary offering for aggregate gross proceeds of $100.7 million and the Company’s common shares commenced trading on the Toronto Stock Exchange under the symbol “LEAF”.

On November 22, 2016, Veteran’s Affairs Canada (“VAC”) announced a new Reimbursement Policy for Cannabis for Medical Purposes (the “VAC Policy”). The key points of the policy include a maximum reimbursement rate of $8.50 per gram of dried marijuana or the equivalent amount of fresh marijuana or cannabis oil, and coverage limitations to an amount of three grams per day, subject to a process that potentially allows for the daily limit to be exceeded by individual Veteran patients by way of an exemption request to be submitted to VAC by a medical specialist. The reimbursement limitations became effective immediately and the coverage limitations became effective May 21, 2017.

In response to the pricing changes introduced by the VAC Policy, the Company began to offer price discounts to qualifying Veterans to assist with the non-reimbursable portion of their medication. This resulted in a reduction in average selling price for the fourth quarter of fiscal 2017. Following the VAC Policy change the Company has continued to see strong patient growth in both veterans and non-veterans, as demand for premium cannabis products has sustained average price above the $8.50 VAC Policy cap.

Sales and volume growth for the year was primarily the result of increased production capacity, patient demand, yield improvements, and the introduction of cannabis oil extracts for sale.

The following are the Company’s cash production costs, on a total and per gram sold basis, for the three and twelve months ended March 31, 2017 and 2016, as compared to reported production costs (excluding costs resulting from the fair value of biological assets), which represents cost of sales, in accordance with IFRS:

Through the course of fiscal 2017, increased production volumes and higher yields resulting in improved efficiencies in labour utilization and allocation of fixed costs have allowed MedReleaf to produce premium, indoor-grown medical cannabis on a comparable cash cost per gram basis to greenhouse peers.

The following is the Company’s Adjusted Product Contribution Margin as compared to the reported gross profit, which includes the gain on changes in fair value of biological assets in accordance with IFRS, for the three and twelve months ended March 31, 2017 and 2016.

The increase in Adjusted Product Contribution Margin for the quarter and the year was as a result of growth in production capacity and sales throughout the year.

The decline in Adjusted Contribution Margin per gram sold for the fourth quarter of fiscal 2017 compared to the prior year period is a result of the impact of the VAC Policy resulting in lower average selling price per gram, partially offset by lower production costs as reflected in a reduction in the cash cost per gram sold.

Improvements in Adjusted Product Contribution Margin per gram sold for the year are primarily attributable to sales volume increases that allow for better utilization of, and the spread of cost allocations attributable to, labour production and overhead costs. 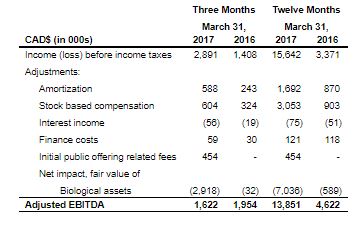 The decrease in Adjusted EBITDA in the fourth quarter of fiscal 2017 compared to the prior year period was driven by higher Adjusted Contribution Margin, offset by increased operating expense as the Company invests in long-term growth initiatives, specifically hiring for domestic expansion, creating the recreational brand portfolio, and developing international opportunities.

For the fourth quarter of fiscal 2017, bad debt associated with VAC receivables, accounting adjustments within the Tikun Olam agreement, and severance totaled $0.6 million. While MedReleaf believes these expenses were extraneous and isolated within the quarter, the Company did not alter for them in the Adjusted EBITDA calculation.

Balance Sheet and Use of Proceeds from Offering

A conference call and webcast to discuss MedReleaf’s fourth quarter and fiscal year 2017 results will be held on Wednesday, June 28, 2017 at 8:00 a.m. (ET). The call will be hosted by Neil Closner, Chief Executive Officer, and Igor Gimelshtein, Chief Financial Officer, followed by a question and answer period.

The Conference Call will also be webcast live at
http://bit.ly/2rl9jgz

This news release, along with the audited consolidated annual financial statements and the Company’s corresponding management’s discussion and analysis, are available on the Company’s website at www.medreleaf.com and on SEDAR at www.sedar.com.

Management makes use of an “Adjusted Product Contribution Margin” measure to provide a better representation of performance in the period by excluding non-cash fair value measurements as required by IFRS. The Adjusted Product Contribution Margin used by management is a non-IFRS financial measure that does not have any standardized meaning prescribed by IFRS and may not be comparable to similar measures presented by other companies. Management believes this measure provides useful information as it represents the gross margin for management purposes based on the Company’s complete cost to produce inventory sold, exclusive of any fair value measurements as required by IFRS. The metric is calculated by removing all amounts related to biological asset fair value accounting under IFRS including gains on transformation of biological assets and the cost of finished harvest inventory sold, which represents the fair value measured portion of inventory cost (“fair value cost adjustment”) recognized as cost of goods sold.

Adjusted EBITDA does not have a standardized meaning under IFRS and is not a measure of operating income, operating performance or liquidity presented in accordance with IFRS and is subject to important limitations. The Company’s definition of Adjusted EBITDA may not be the same as similarly titled measures used by other companies. The Company believes that Adjusted EBITDA provides a useful tool for assessing the comparability between periods of its ability to generate cash from operations. Adjusted EBITDA is presented in order to provide supplemental information to the Financial Statements included elsewhere in this prospectus, and such information is not meant to replace or supersede IFRS measures.

MedReleaf sets The Medical Grade Standard™ for cannabis in Canada and around the world. The first and only ICH-GMP and ISO 9001 certified cannabis producer in North America, MedReleaf is a R&D-driven company dedicated to patient care, scientific innovation, research and advancing the understanding of the therapeutic benefits of cannabis. Sourced from around the world and perfected in one of two state of the art facilities in Ontario, MedReleaf delivers a variety of premium products to patients seeking safe, consistent and effective medical cannabis.

For more information on MedReleaf, its products, research and how the Company is helping patients #livefree, please visit MedReleaf.com or follow @medreleafcanada.