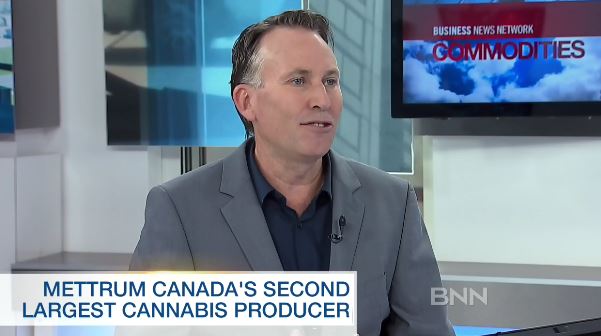 Mettrum (TSXV: MT) (OTC: MQTRF) recently reported the second highest quarterly sales among the 8 publicly-traded Canadian medical cannabis licensed producers, trailing only Canopy Growth. Though the company has made substantial progress over the past few years as it has grown its registered patients to over 13K, it has kept a relatively low profile in the media. This week, BNN interviewed CEO Michael Haines, who provided a lot of insight into the company’s strategy and plans.

Haines described the company’s reliance upon physicians to push new patients to it. Mettrum employs many tools designed to help the doctors understand cannabis and prescribe it more effectively, including the Mettrum Spectrum, which contains six color-coded categories based on the amount of THC, rather than rely upon street names. The company has over 2000 prescribing doctors and is seeing accelerated acceptance among physicians. Mettrum’s cannabis electronic medical record platform gives doctors more insight into the patient’s consumption and more control over which strains the patient uses.

The company currently has a 6mm gram annual production capacity now and is on track to double it next year, which should allow it to supply 15% of the medical market, according to its estimates.  By 2019, Mettrum expects to boost capacity to 50mm grams in order to supply about 15% of the combined medical and legal markets. Haines discussed decreasing costs of production that he attributes to the recent move into their newest 60K s.f. facility.  The company dropped its production cost per gram from $2.50 in the March quarter to $2.00 in June and expects to reach $1.75 in the near future.