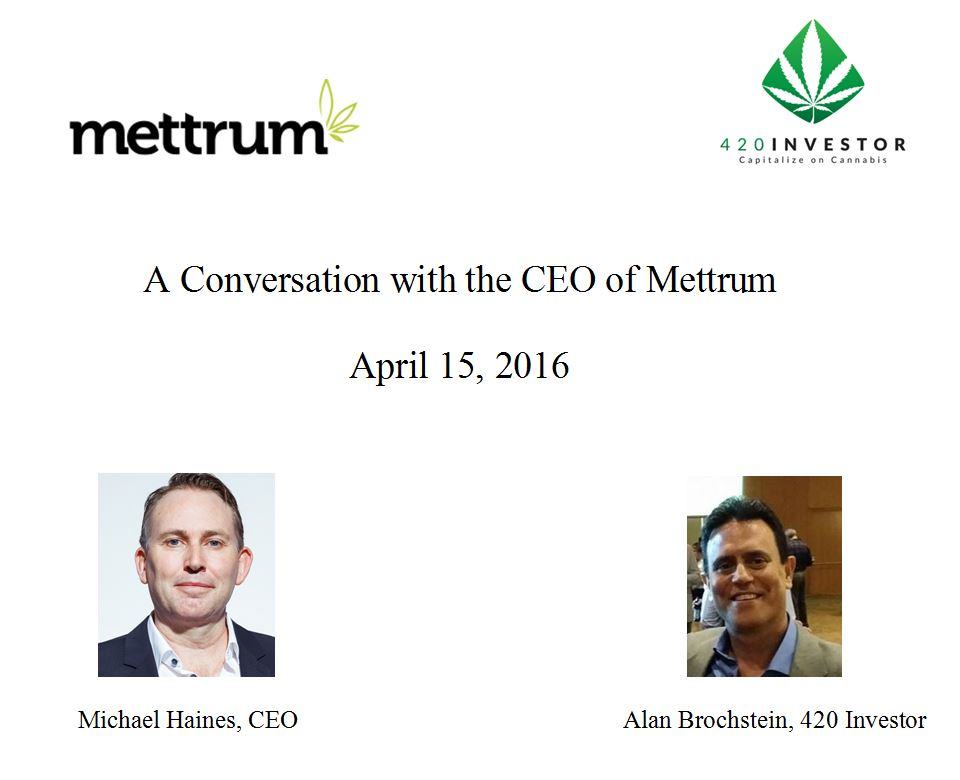 While Mettrum (TSXV:MT) is one of the leading licensed producers in Canada’s MMPR program, with revenue in its FY16-Q3 (December 2015) exceeding $2mm, the company has been relatively quiet over the past two years as it has built its customer base to over 6100 patients as of February 23rd. The company is known best for its medical cannabis operations, but it also operates Mettrum Originals, which sells products derived from industrial hemp.  I interviewed its CEO, Michael Haines, in a 38-minute interview that can be accessed here in order to learn more about the company’s plans.

Haines has a background in marketing and communications, focused on video games and video game distribution.  He started Mettrum with six founders that brought different skills to the organization.  The most recent hire is George Scorsis, who joined as President in September and was formerly the President of Red Bull Canada. He is charged with the transition from a controlled substance strategy to a packaged goods strategy. Peter Kampian, the CFO, was formerly CFO of Algonquin Power (TSX:AQN).  Trevor Fencott, Chief Legal Officer, runs regulatory affairs and has worked with Haines previously.  Grant Koehler, EVP Sales & Marketing, previously worked at Valeant (NYSE:VRX) and oversaw sales of Cesamet, a synthetic THC pharmaceutical. Luke Escott is the Master Grower and has been growing cannabis in Canada since 2001. He discussed the qualifications of the directors as well.

Mettrum Originals line includes functional foods and other products derived from industrial hemp and has allowed the company an early start on packaged goods sales. Mettrum has over 2000 retailers in North America, including Whole Foods, that carry its products. This Hemp Brownie Mix offers a glimpse into what the future might look like (it is a intended to be combined with medical cannabis):

As far as Mettrum’s strategy for adult legalization, the company will use the Mettrum brand.  The company is preparing its strategy and expects that we should learn more about the timing in the next few months.  Haines expects legalization in two years but will be ready within a year.

Mettrum has three licensed facilities, including two in Bowmanville and one in Creemore. The original Bowmanville facility was small, with the Creemore facility about six times larger.  The new Bowmanville facility is twice as big as Creemore. The fully built out capacity would be 12mm grams per year, but the company has enough land to be able to sell 25-30mm grams with additional buildings. Today, the company is licensed for 3.5mm grams, which could supply 13,000 patients and up to $30mm in revenue, and is built for production of up to 6mm grams.

Mettrum has a unique marketing strategy, selling its products using the Mettrum Spectrum instead of with street names, which has resonated with physicians and patients.  THC/CBD ratios drive the color coded system with six segments: 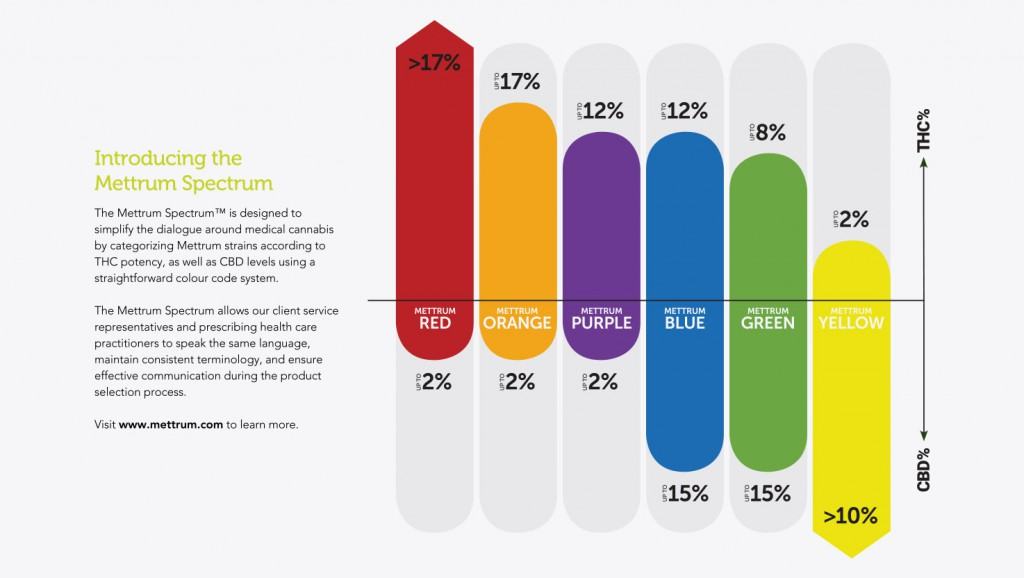 Within the colors, numbers are used to indicate the terpenes included.  The company sells ten strains of dried cannabis.  The product profiles were created and then curated with appropriate strains. The company has 60 genetic strains and close to 1000 different seeds in its library.

Haines discussed its electronic medical record (EMR) system that allows doctors to monitor patient consumption practices.  Doctors can impose limits on potency and can monitor in real-time.  The company just announced an observational study on how cannabis is being prescribed as well as its effectiveness in treating symptoms.

Mettrum has been enjoying a premium price relative to its peers, something that Haines believes, perhaps counter-intuitively, is due to patients being responsible financially for their own purchases.  He believes that consistency, availability and variety lead to customer retention.  The average spending per gram has increased to over $8 per gram over the past year despite no price hikes, as patients are opting for the more premium products.  $9.60 per gram is the highest-priced product.

Mettrum has seen rapid uptake initially with its cannabis oils.  The company, unlike peers, is using flower and not trim. It offers 3 different oils at this time (Red, Blue and Yellow). Over time, the company will offer products from trim under a different brand.  The cannabinoid output from flower is greater than that from trim, according to Haines, so he is using two Waters supercritical CO2 machines to create oil as rapidly as possible.

Mettrum hasn’t raised capital since 2014, when it sold 13.8mm units at $2.50 per share.  At 12/31, the company still had cash of approximately $11mm. As far as raising additional capital, the timing of recreational cannabis will play a role.  For now, the company believes that it will be able to self-fund its internal expansion with its existing resources.  A loosening of rules on extracts could also accelerate spending.  Haines didn’t rule out M&A, but it’s not something he expects.  There may be strategic reasons to acquire another company, but Mettrum doesn’t intend to buy additional capacity in order to scale.

Haines explained the lackluster action in the stock as related to the company’s focus on institutions exclusively initially rather than retail investors.  More importantly, the strategy of going from a small license to larger licensing created concern about the ability of the company to get the additional licenses to be in a position to scale, which it now has done, though it took longer than expected.  Mettrum will be reporting its FY16 results in June or July.