DENVER and TORONTO, May 07, 2019 (GLOBE NEWSWIRE) — MJardin Group, Inc. (“MJardin” or “the Company”) (CSE: MJAR) (OTCQX: MJARF), a leader in premium cannabis production, today announced its financial and operating results for the year ending December 31, 2018. All amounts are expressed in Canadian dollars unless otherwise indicated.

January 6, 2019, the Company announced a definitive agreement with Rama First Nation to construct and operate a cultivation and retail complex. This joint venture, 51% owned by Rama First Nation and 49% owned by MJardin, is strategically located across from Rama Casino with 3 million visitors annually.

On April 1, 2019, MJardin announced the sale of 11% of its position in AtlantiCann Medical Inc. to the 13 Mi’kmaq Nova Scotia First Nations. In connection with this agreement, MJardin continues to explore potential retail partnerships between the Company and the Mi’kmaq First Nations in Nova Scotia. The proceeds of this transaction were utilized to pay-down existing debt.

On April 22, 2019, the Company announced the acquisition of Carson City Agency Solutions dba Cannabella (“Cannabella”), a leading Nevada producer of edible products with distribution throughout the state. Cannabella’s capabilities position MJardin to drive stronger margins from its existing Cheyenne facility as products are transferred into more value-add segments of the supply chain. The Company expects this transaction to close in the third quarter of 2019.

In May 2019, MJardin anticipates the completion of construction of the Company’s 75% owned “GRO” facility. Upon completion, the Company will submit an Evidence of Readiness to Health Canada for the purposes of receiving a Cultivation and Processing License.

“2018 was a year of significant change in the company as we expanded in to another US state, entered the Canadian market via acquisition, and became a publicly traded company on both the CSE and OTC,” remarked Adrian Montgomery, Chairman of the Board and Interim CEO. “In addition, we have restructured our corporate size and organization to better integrate and align with our core business goals in both countries. We are in a healthy position moving into 2019 and are proud to focus on what we do best, deliver high yield premium cannabis that the market will appreciate.” 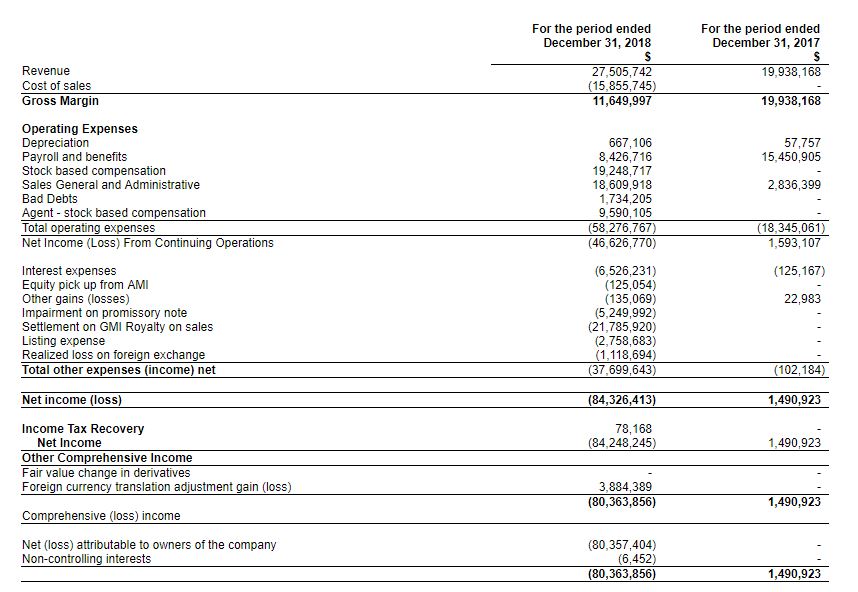 EBITDA, Adjusted EBITDA and Adjusted Net Loss from Operations are non-IFRS measures that the company uses to assess its operating performance.

After an acquisitive 2018, MJardin has streamlined operations and remains focused on executing our goals of completing construction on all current facilities, as well as the planned expansion to double capacity at the Cheyenne facility. Management remains focused on drawing from its 10+ years of commercially growing cannabis at scale in order to maximize production from the Company’s existing portfolio of assets. The Canadian cannabis market remains in its infancy with legalization only occurring in the fourth quarter of 2018. As such, we continue to witness issues across the sector regarding the scalability and commercialization of planned production. MJardin is confident that our cultivation expertise will enable the Company to materially increase production into the remainder of 2019 and continue to command premium pricing for sales of both trim and dried flower.

“WILL” – Cultivation Facility in Brampton, Ontario: The Company continues to make progress on the planned expansion of the 32,800 sq. ft WILL Cannabis facility with all incremental construction scheduled to be completed by Q3 2019. These improvements will enable MJardin to increase production to approximately 3,000 KG per year of high yield, premium cannabis.

“AMI” – Cultivation Facility in Lower Sackville, Nova Scotia: The three-way joint-venture between Nova Scotia Mi’kmaq (51%), MJardin Group (39%) and the Halef Group (10%) reached full grow production of its 48,000 square foot indoor facility Phase 1, in only four months from receiving its cultivation and processing license in December 2018. Construction of Phase 2’s 20,000 square foot expansion is currently underway and expected to be completed within the fourth quarter of 2019. Additionally, AMI is currently in the initial stages of establishing an extractions facility within the existing facility at Lower Sackville and is currently pursing GMP certification for both the extractions and cultivation facilities. The Company believes this diversified product mix will drive strong revenue and margins from the facility once refined products become legalized in the fourth quarter of 2019.

“GRO” – Cultivation Facility in Dunville, Ontario: The joint-venture between MJardin Group (75%) and Grand River Organics (25%) is near construction completion of its 11,000 square foot indoor facility and on track for its next Health Canada licensing stage. The Company expects its first commercial sale from the facility in third quarter of 2019.

“WARMAN” – Cultivation Facility in Winnipeg, Manitoba: The 100% MJardin owned facility is nearing Phase 1 completion within the 120,000 square foot facility. This is the Company’s largest asset in Canada and the US and the Company expects receipt of a Cultivation & Processing license from Health Canada by the fourth quarter of 2019.

US Owned Operations: With the anticipated closing of the previously announced transaction of “Cheyenne” in Carson City, Nevada and completion of the facility build out, MJardin anticipates increased EBITDA margins as production from Cheyenne via recently acquired “Cannabella” moves into more value-added refined products vs. sales of dried flower alone.

Premium Wholesale Pricing: Due to the high quality of MJardin’s production of cannabis strains, the Company continues to receive premium pricing on all LP-to-LP product sales from the Company’s WILL facility. MJardin expects this favorable pricing to continue for the duration of 2019 and be captured by other facilities as they come online.

Management and Board Composition

Mr. Lowe founded and operates Cloud 9 Support, LLC, a horticulture supply firm. Mr. Lowe co-founded and served as President of Cultivation for MJardin from 2014 to 2017, while scaling it be one of the largest advisory cannabis cultivators in the world. In 2015, he co-founded and still serves as managing partner for Potco, LLC, a medical marijuana dispensary and cultivation brand, and in 2016 founded and owns 100% of Next1 Labs, currently the largest provider of high terpene/live resin oils in the state of Colorado. In addition to the foregoing, Mr. Lowe has been employed as head of cultivation for Cannabis for Health, and as a cultivation advisor to LightShade Labs.

Mr. Witcher is a former law enforcement officer with the United States Drug Enforcement Administration and the Kansas City Police Department. Witcher was most recently the President of Central and Western North America for MJardin. Prior to this, Mr. Witcher served as the Chief Compliance Officer at MJardin from October 2017 to April 2018 and the President of Buddy Boy Brands, one of the largest cannabis retail operations in Colorado from 2014 to 2017.

A comprehensive discussion of MJardin’s financial position can be found in the annual management discussion and analysis that is filed on SEDAR and can be found at www.sedar.com.

MJardin is a cannabis management platform with extensive experience in cultivation, processing, distribution and retail. For over 10 years, MJardin has refined cultivation methodologies, developed state of the art facilities and implemented vertical integration for and on behalf of license owners. MJardin is based in Denver, Colorado and Toronto, Canada. For more information, please visit www.mjardin.com

The CSE has not in any way passed upon the merits of and has neither approved nor disapproved the contents of this news release.