DENVER–(BUSINESS WIRE)–MJardin Group, Inc. (“MJardin” or the “Company”) (CSE: MJAR), a leader in cannabis management, today reported financial results for its third quarter ended September 30, 2018. All amounts are expressed in United States dollars. Certain metrics, including those expressed on an adjusted basis, are non-IFRS measures. See “Non-IFRS Financial Measures” below.

We are pleased to report our first quarterly results as a publicly traded company, continuing our strong growth trends and positive EBITDA. This is a very exciting time for MJardin with this month’s public listing of Mjardin shares and the announcement of the proposed acquisition of GrowForce. We believe we are well positioned as one of the largest and most experienced cannabis operators in North America and as the largest multi-national operator. 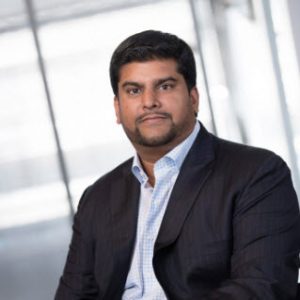 We intend to continue to grow our footprint of managed and owned facilities, both across the U.S. and Canada as well as globally, and are pleased with the progress we have and are continuing to make towards becoming a preeminent global operator of legal cannabis assets.

“Based on current operations, MJardin has one of the largest international footprints of any cannabis provider. MJardin now operates with direct ownership, or has investment, in three provinces and three states. MJardin will continue to expand either organically or through acquisitions both in these locations and into new markets that are consistent with our operating principles,” continued Gautam. 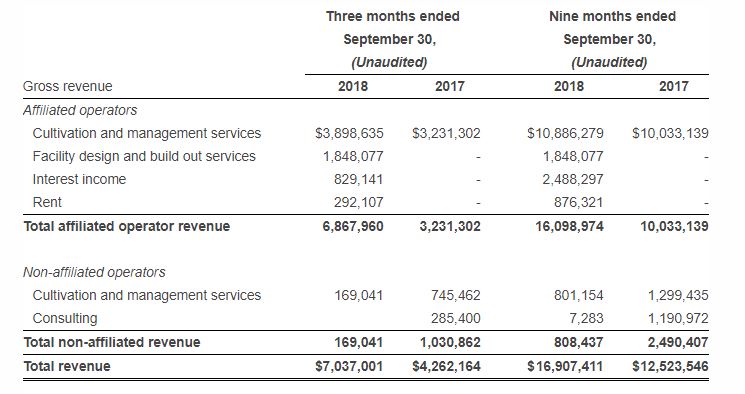 Net revenue, defined as gross revenue less direct expenses incurred for compensation and benefits and other operating costs borne by the Company in performing its consulting, and cultivation and operations management services, increased 140.1% to $4.0 million in the third quarter of 2018 from $1.7 million in the third quarter of 2017 and gross margin increased to 56.3% from 38.7% in the same period a year ago. The increase in gross margin primarily reflects revenue earned for facility design and build-out fees from GrowForce-owned cultivation centers in Canada, the increase in revenue from interest income and rent earned from affiliated operator Buddy Boy Brands.

Total operating expenses increased 58.9% to $5.8 million from $3.6 million in the prior year period. The increase reflects increased compensation and benefits to support growth, including increased grow facility personnel at affiliated and non-affiliated operator facilities and the continued expansion of the Company’s executive team and corporate office personnel. The operating expense increase also includes a $0.7 million increase in professional fees to support recent equity, public listing and strategic transactions.

Adjusted EBITDA increased 48.4% to $1.0 million in the third quarter of 2018 from $0.6 million in the third quarter of 2017. Adjusted EBITDA, which is not an IFRS measure, is defined by us to mean EBITDA adjusted for acquisition-related costs, share-based compensation, corporate restructuring charges, compensation-related derivative gains or losses (e.g. stock options and warrants) and gains or losses on property and equipment. There is no directly comparable IFRS measure for Adjusted EBITDA; the most directly comparable measure is net (loss) income.

See the reconciliation of Net (Loss) Income to Adjusted EBITDA below.

As of September 30, 2018, the Company had $2.5 million in cash and cash equivalents, total assets of $78.3 million and $31.8 million of total debt. After the end of the third quarter, on October 19, 2018, MJardin completed an equity capital raise in the form of a subscription receipt offering in the approximate amount of CAD$26 million. On November 13, 2018, MJardin completed the reverse take-over of Sumtra Holdings. On November 15, 2018 the Company commenced trading on the Canadian Securities Exchange and the $26 million of subscription receipt proceeds were released from escrow and available to the Company.

During the first nine months of fiscal 2018, the Company used $3.4 million of cash in operations and invested $3.6 million in capital expenditures, including $2.6 million of payments made for equipment on behalf of GrowForce Holdings. The operating cash use primarily reflects a $5.4 million increase in payments due from affiliates.

There also will be a simultaneous, live webcast available on the Investors – Events and Presentations section of the Company’s web site at http://investors.mjardin.com/ or directly at http://public.viavid.com/index.php?id=132426. The webcast will be archived for approximately 90 days on the Company’s website.

MJardin is a global cannabis management platform with extensive experience in cultivation, processing, distribution and retail. For over 10 years, MJardin has refined cultivation methodologies, developed state of the art facilities and implemented vertical integration for and on behalf of license owners. As a well-capitalized organization, MJardin continues to pursue strategic expansion and M&A opportunities across global legal cannabis markets. MJardin is based in Denver Colorado, with offices in Toronto, Canada and Barcelona, Spain.