Since completion of the spin-out of non-US assets on February 5th of this year, we have made excellent progress establishing a strong corporate and operational foundation to support our international and domestic growth strategies. 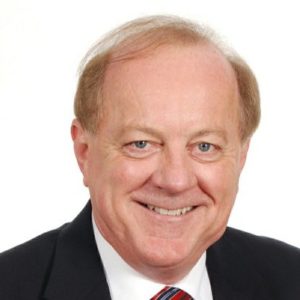 Our recent accomplishments include completing a C$26.9 million capital raise, successfully listing on the CSE, and completing the acquisition of HolyWeed, the only Swiss CBD brand officially ‘Swiss Premium Certified Organic’, which has given us a foothold in Europe and the opportunity to expand into other legal ‘cannabis-light’ international markets.

“HolyWeed already offers a diverse product range that is compliant with Swiss regulations and benefits from a wholesale distribution network spanning more than 4,000 kiosks across Switzerland. We are working toward broadening HolyWeed’s product offering, launching branded retail stores in Geneva and Zurich and expanding to wider export markets across Europe, starting with recent approval to export into Belgium. To advance these goals, we are also developing a GMP-grade manufacturing facility in Switzerland.”

“To further drive our European expansion strategy, we entered into a definitive agreement to acquire a ‘GMP-ready’ pharmaceutical facility in Malta and received a LOI for a cannabis production license. By establishing ourselves as one of the first licensed cannabis producers to export cannabinoid-based medicines into the EU from Malta, we are in a strong position to build brand recognition of our products and gain market share,” continued Mr. Boyes.”

“This acquisition strategy enables us to use our first mover advantage to rapidly penetrate the under-served European market. We will continue to develop our portfolio of leading cannabis assets internationally and expect to take full advantage of the growth of the CBD industry in Europe over the coming years.”

“In conjunction with our international strategy, we are investing in the build out of our Owen Sound facility in Canada, which will significantly increase our cultivation, growing and manufacturing capacity. We have applied to Health Canada for this facility to become a licensed producer, and, on April 24, 2019, received notice from Health Canada that it is at the ‘Confirmation of Readiness’ stage. We expect partial operations to commence by the end of December 2019, pending receipt of the final license from Health Canada. The Canveda operations are currently in full production and it received its sale for medical purposes and standard processing licences in February, 2019. The Canveda assets are expected to be one of the first to generate significant revenues to the Company.”

The key financial measures indicated below were used by management in evaluating and assessing the performance of MPXI’s business for the fiscal second quarter of 2019. A more detailed discussion of these and other metrics, as well as operational events, can be found in the Company’s Financial Statements, Management Discussion & Analysis (“MD&A”) filed on www.sedar.com. All figures are presented in Canadian dollars.

Professional fees increased to $435,292 for the three months ended March 31, 2019 as compared to $12,388 in the comparable period. This increase is due to the change in volume and complexity of accounting and legal services required by the Corporation driven by growth, acquisitions and the arrangement. These fees include expenses related to audit, legal work, government and investor relations, consulting and costs associated with Board of Directors.

The increase in amortization and depreciation relates to intangible and capital assets acquired and the commencement of amortization of the Canveda license during Q2 2019.

Other income and expenses

MPX International Corporation is focused on developing and operating assets across the global cannabis industry with an emphasis on cultivating, manufacturing and marketing products which include cannabinoids as their primary active ingredient. 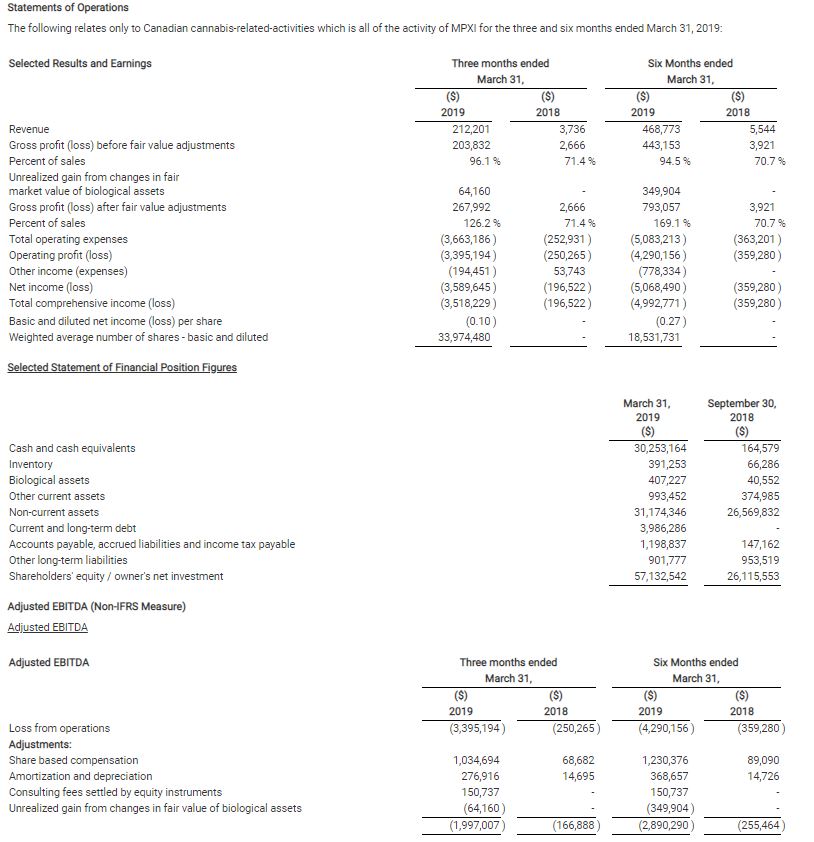 The Corporation uses “Adjusted EBITDA”, which is not defined under IFRS. Management believes that these measures provide useful supplemental information to investors and is computed on a consistent basis for each reporting period. “Adjusted EBITDA” is a metric used by management which is income (loss) from operations, as reported, before interest, tax, and adjusted for removing other non-cash items, including the stock-based compensation expense, amortization and depreciation, non-cash occupancy costs, and the non-cash effects of accounting for biological assets and the non-cash effect of accounting for inventory acquired through acquisition at fair value. Management believes “Adjusted EBITDA” is a useful financial metric to assess its operating performance on a cash basis before the impact of non-cash items and acquisition related activities.