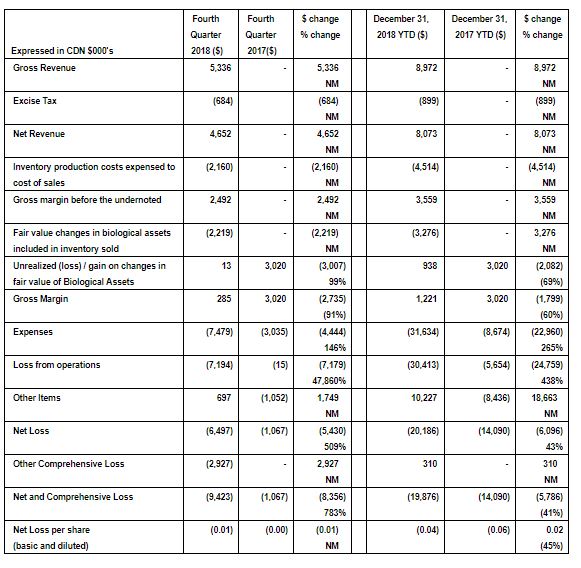 During the three month period ended December 31, 2018, the Company generated net revenue of $4,652 (December 31, 2017 – $Nil). $2,611 of revenue was from shipments of dried cannabis to the provincial government wholesale distributors in Alberta, British Columbia, Nova Scotia, Ontario and Prince Edward Island for the adult-use market. $2,041 of revenue was from wholesale sales of cannabis.

During the three month period ended December 31, 2018, $2,160 of costs incurred during the production process and capitalized to inventory were expensed upon initial sale of inventory. This resulted in gross margin of $2,492 (53.5% of net revenue) before the fair value adjustment on the sale of this inventory. The expense of $2,219 for the fair value changes in biological assets included in inventory sold represents the amount of non-cash fair value adjustment being realized upon the sale of this inventory.

For the three month period ended December 31, 2018, total expenses were $7,479 (December 31, 2017 – $3,035). The Company’s major expenses incurred during the quarter relate to: selling, general, and admin expense of $2,138; sales, marketing and business development expense of $1,988; wages and benefits of $2,342; consulting and professional fees of $774; and other costs related to share-based compensation, rent and facilities and amortization.

Included in other items is net interest income of $708 offset by accretion and interest expenses of ($11). Other comprehensive loss is comprised of the fair market value change recognized on strategic investments made in other Canadian cannabis businesses in 2018.

As at the date of this press release, the retrofit of the Niagara Facility has been completed with infrastructure in place to support full run-rate production of 20,000 kg of dried cannabis annually. Cannabis is being cultivated in the new section of the retrofitted greenhouse with several harvests having already taken place. The current budget to complete the retrofit, construction of processing areas and the second greenhouse is $38.2 million, and costs incurred to date are $19.1 million.

As at the date of this press release, the construction of the second greenhouse and headhouse expansion is progressing as planned, with an occupancy permit having already been issued by the municipality for the new headhouse. The second greenhouse has its structure erected, walls and roof installed and is progressing with electrical, heating, ventilation and air conditioning work. Assuming no interruptions in the construction schedule, the completion of the construction of the entire Niagara Facility (including the new processing administration areas and new greenhouse) is expected towards the end of the second quarter of 2019.

Assuming the full ramp up, including the construction of the new greenhouse and processing areas at the Niagara Facility, which is currently in progress, and the continued operational efficacy of the Brantford Facility, the complete potential aggregate annual production for all facilities will be approximately 42,000 kg of dried cannabis. This estimate is subject to change based on realized plant yields experienced.

The Company’s “Adjusted EBITDA” is a Non-IFRS metric used by management that does not have any standardized meaning prescribed by IFRS and may not be comparable to similar measures presented by other companies. Management defines the Adjusted EBITDA as the Income (loss) for the period, as reported, before accretion and interest, tax, and adjusted for removing the share-based compensation expense, depreciation and amortization, and the fair value effects of accounting for biological assets and inventories. Management believes “Adjusted EBITDA” is a useful financial metric to assess its operating performance on a cash basis before the impact of non-cash items. A reconciliation of net income to EBITDA is presented below:

About Newstrike and Up Cannabis

Newstrike is the parent company of Up Cannabis Inc., a licensed producer of cannabis that is licensed to both cultivate and sell cannabis in all acceptable forms. Newstrike, through Up Cannabis and together with select strategic partners, including Canada’s iconic musicians The Tragically Hip, is developing a diverse network of high quality cannabis brands. For more information visit www.up.ca or www.newstrike.ca.