Although Ohio legalized medical use of cannabis four years ago, the state has been slow to grow its program. Myriad regulations, along with delays in awarding licenses, kept the program from becoming fully functional until January 2019, when the state’s first licensed medical cannabis dispensary opened.

Although adult-use of cannabis is legal in nearby states such as Michigan and Illinois, Ohio Gov. Mike DeWine has made it clear that he is not interested in taking the next step toward legalization. Ohio lawmakers have yet to file legislation, and no steps have been taken toward putting legalization on the ballot for 2020. That may be, in part, due to the fact that those who want to purchase it need only cross state lines to do so.  In this review, we take a look at the history of Ohio’s cannabis program, the existing marketplace and potential for future growth.

On Sept. 8, 2016, then-Gov. John Kasich signed House Bill 523 into law, legalizing medical marijuana in Ohio. The law mandated that a medical marijuana program be established within two years, but red tape delayed sales of medical cannabis until the beginning of last year. Pent up demand led to thousands waiting in long lines on the first day of sales, according to published news reports.

The law allows use for 21 conditions from AIDS to Ulcerative Colitis. The state’s medical board, which is responsible for adding qualifying conditions, last year rejected petitions to add anxiety and autism spectrum disorders to the list. 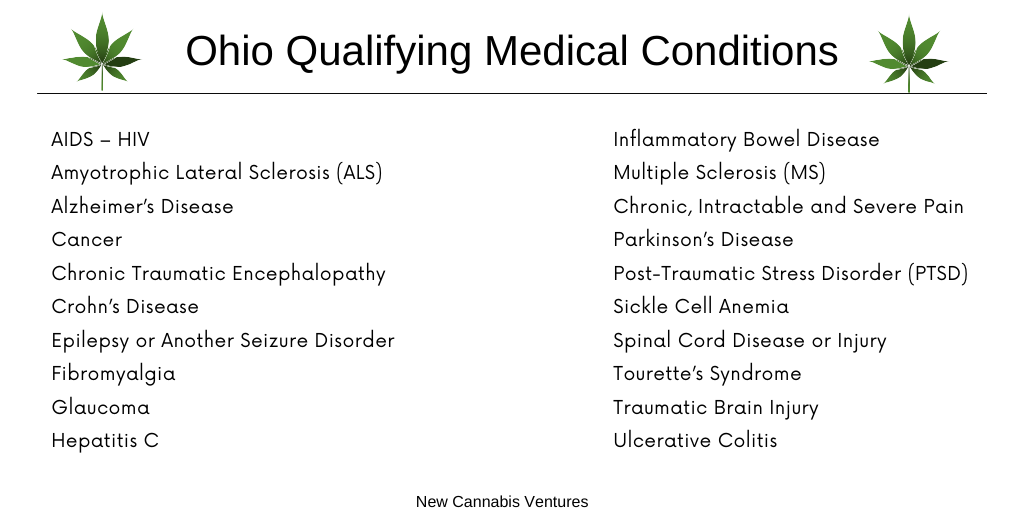 Although Ohio law prohibits patients from smoking cannabis, flower can be sold for use in a vaporizer. The law does not allow patients to grow their own cannabis. It allows patients to purchase a 90-day supply at a time in the following amounts:

A small percentage of Ohio’s 11.7 million residents (0.7%) are medical cannabis users. As of Dec. 31, 2019, 83,857 patients had recommendations for use by a physician, with 78,376 patients registered. Another 8,259 caregivers also were registered. There are 590 physicians who are certified to recommend medical cannabis. The latest figures can be found here.

As of the end of January 2020, an estimated 7,869 pounds of plant material was sold along with 372,071 units of manufactured product. There has been an estimated $65.6 million in product sales cumulatively. Historical sales data can be found here.

Terradiol Ohio LLC, another Level I cultivator with a pending license, has ties to TILT Holdings (CSE: TILT) (OTCQB: TLLTF). The state tried to revoke its large-scale cultivation license because of a dispute, but the company was able to overcome its issues and was given until the end of this year to obtain a certificate of operation, according to news reports. Ohio Grown Therapies (OGT), which has a pending license, is in the process of being acquired by Curaleaf Holdings Inc. (CSE: CURA) (OTC: CURLF).

The law calls for no more than 60 dispensary licenses to be awarded, and they may not be any less than 500 feet from a school, church, public library, public playground or public park. So far there are 49 active licenses. The state offers an interactive map for all licensed Ohio dispensary locations, depicted below, and it also offers a spreadsheet, accessible from that page, with data that includes the name, address, phone number, license number, designated representative and date of licensing.

Several large multi-state cannabis companies have licenses to open dispensaries. Among them are:

Other operators with more than one dispensary include Bloom Medicinals (5), Pure Ohio Wellness (2), Strawberry Fields (4) and Verdant Creations (5).

Ohio issued 43 provisional licenses to processors, 16 of which have received certificates of operation. The complete list of Ohio medical cannabis processors can be found here.  Included among them is Ohio Medical Solutions, an affiliate of Vireo Health International Inc. (CNSX: VREO, OTC: VREOF).

Five provisional licenses were issued for testing, three of which have received certificates of operation. They can be found here.

On a side note, Innovative Industrial Properties Inc. (NYSE: IIPR), a cannabis REIT, has been cutting leaseback deals with some cannabis companies doing business in Ohio. On Feb. 3, IIP announced it closed on a sale-leaseback deal with Green Thumb Industries for its pending processing facility in Toledo. This was its second deal with GTI, which also sold it a processing facility in Pennsylvania. On Jan. 29, Innovative announced it had purchased a facility in Ohio from Cresco Labs for around $10.5 million, with an additional investment of up to $1.9 million, to lease it back to the grower.

Unlike other states, where it’s been full steam ahead for the cannabis industry, Ohio has taken a slow-and-steady approach. Its bumpy start in getting the program off the ground, limits on medical use and high prices caused by a lack of product availability at the onset of the program add up to a market that saw about $60 million in sales, about half of which came in the last quarter of 2019.

As more cultivators come online, more dispensaries open and more medical conditions are approved for cannabis use, Ohio’s medical cannabis program should grow. Meantime, while surrounding states Michigan and Illinois have legalized adult-use cannabis, Ohio is not expected to follow suit right away. The governor has indicated he is not in favor of it and there are no immediate plans for legislation this year. Talk of putting the question to voters on a ballot likely would not come in 2020 either.