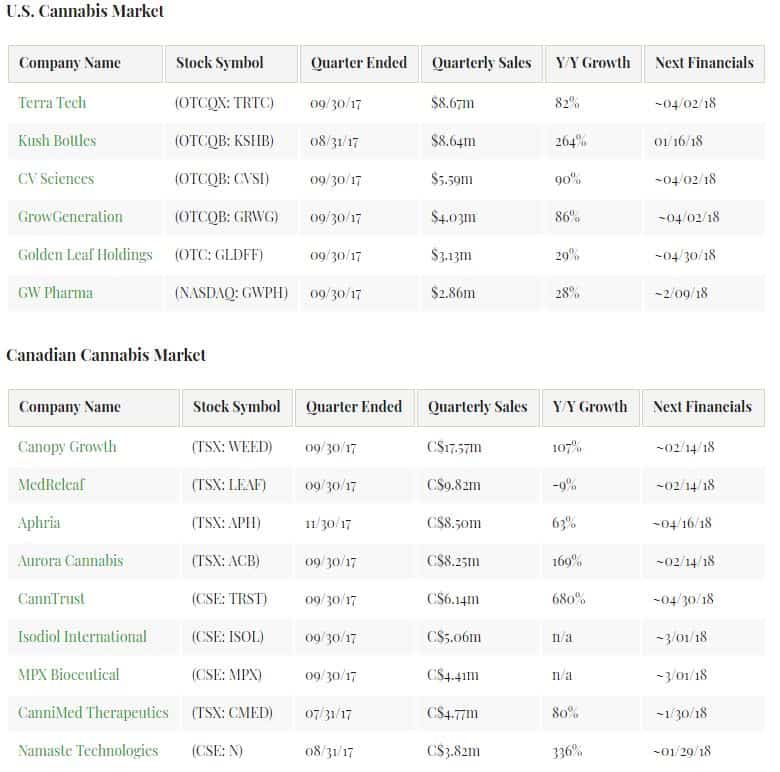 The Public Cannabis Company Revenue Tracker, managed by New Cannabis Ventures, ranks the top revenue producing cannabis stocks that generate industry sales of more than $2.5m per quarter. This data-driven, fact-based tracker will continually update based on new filings so that readers can stay up to date. Companies must file with the SEC or SEDAR to be considered for inclusion.

Fifteen companies currently qualify for inclusion, with six filing in U.S dollars and nine in the Canadian currency.  In the United States, mCig (OTC: MCIG) was removed after its FY18-Q2 financials revealed a decline in sales below the $2.5mm minimum. We have updated the Canadian list to reflect the recent results from Aphria (TSX: APH) (OTC: APHQF) and Namaste Technologies (CSE: N) (OTC: NXTTF).

Aphria’s FY18-Q2 sales accelerated from C$6.12 million in the prior quarter to C$8.50 million, which represented annual growth of 63% as the company took advantage of its increased capacity. Aphria moved into third place, but Aurora Cannabis (TSX: ACB) (OTC: ACBFF), which will report its FY18-Q2 within the next month, is expected by analysts (per Sentieo) to generate sales of C$9.0 million, regaining the third spot. Namaste Technologies  reported its FY17-Q4 ending 8/31, with sales of C$3.82 million, which represented growth of 336% from the prior year.

In the near-term, Kush Bottles (OTC: KSHB) will announce its FY18-Q1 results on Tuesday (January 16th) and host a conference call. CanniMed Therapeutics (TSX: CMED) (OTC: CMMDF) will report its FY17 results for the year ending October 31 by the end of January. Namaste is due to report FY18-Q1 results for the quarter ending 11/30 by the end of January. By mid-February, Aurora Cannabis, Canopy Growth (TSX: WEED) (OTC: TWMJF), GW Pharma (NASDAQ: GWPH) and MedReleaf (TSX: LEAF) (OTC: MEDFF) will report results for the quarter ending 12/31.