CALGARY, April 1, 2019 /CNW/ – High Tide Inc. (“High Tide” or the “Company”) (CSE:HITI) (Frankfurt:2LY), an Alberta-based, retail-focused cannabis corporation enhanced by the manufacturing and wholesale distribution of smoking accessories and cannabis lifestyle products, has filed its financial results for the first fiscal quarter of 2019 ending January 31st, the highlights of which are included in this news release. The full set of Condensed Interim Consolidated Financial Statements and Management’s Discussion and Analysis can be viewed by visiting High Tide’s website at www.hightideinc.com, its profile page on SEDAR at www.sedar.com or the Company’s CSE profile page at www.thecse.com. 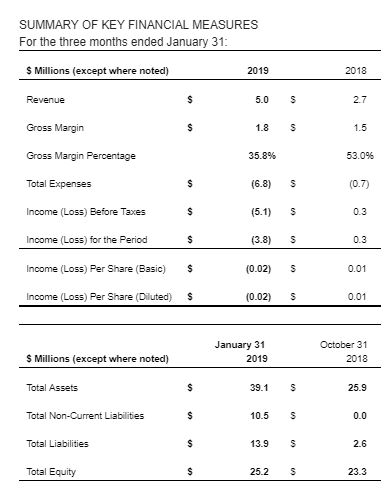 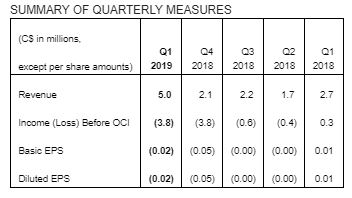 Representing the core of High Tide’s business, RGR Canada Inc. is a high-quality and innovative designer, manufacturer and distributor of cannabis accessories. Famous Brandz Inc. is a dominant manufacturer of licensed lifestyle accessories, through partnerships with celebrities and entertainment companies including Snoop Dogg and Paramount Pictures. Famous Brandz products are sold to wholesalers and retailers around the world. Founded in 2009 and approved by the Canadian Franchise Association, Smoker’s Corner Ltd. is among Canada’s largest counter-culture chains with 12 locations. Kush West Distribution is in the process of becoming a cannabis wholesaler in the province of Saskatchewan. Based in Amsterdam since 2000, Grasscity.com is the world’s preeminent and most searchable online retailer of smoking accessories and cannabis lifestyle products with approximately 5.8 million site visits annually. With the deregulation of recreational cannabis for adult use across Canada, Canna Cabana Inc., with 11 current locations, is in the process of becoming a sizeable retail brand with a sophisticated yet playful customer experience, while KushBar Inc. is a retail concept that will also be focused on the valued Canadian cannabis consumer.

For more information about High Tide Inc., please visit www.hightideinc.com and its profile page on SEDAR at www.sedar.com.