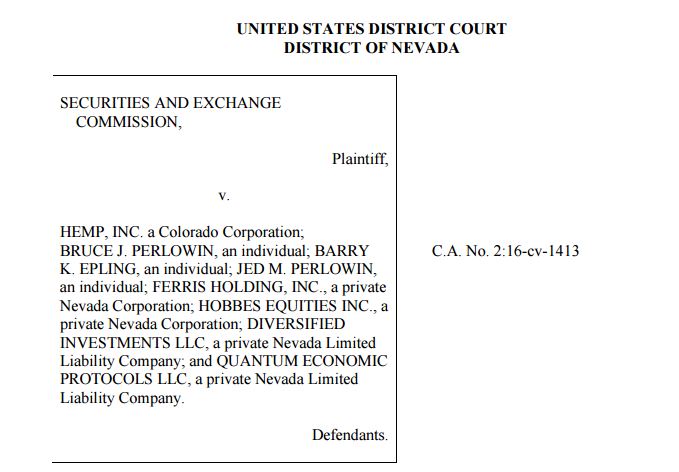 The SEC filed civil litigation against cannabis penny stock Hemp, Inc, (OTC: HEMP)  and several affiliates, including CEO Bruce Perlowin, on June 20th, The complaint alleges that Perlowin and the company engaged in a long-running scheme involving “phony gifting” of shares and “bogus consulting” agreements that allowed insiders to sell hundreds of millions of shares that were not properly registered and that should have been restricted. Further, the SEC alleges that Perlowin and the other defendants, which included his brother Jeb and Barry Epling, made false statements to broker-dealers, Alpine Securities and Scottsdale Capital.

After founding another cannabis penny stock, Medical Marijuana, Inc. (OTC: MJNA) in 2009, Perlowin left to create Hemp, Inc, in 2011. Since then, the company has generated lots of press releases and additional shares but little in terms of revenue. The company would borrow money from Perlowin regularly and then allow him to convert it to equity indirectly by issuing him convertible preferred stock at a significant discount to its intrinsic value, a scheme I described three years ago.

The SEC took action without suspending trading in the stock. It seeks to permanently bar the company and defendants from engaging in violation of the securities laws, to return “all ill-gotten gains derived directly or indirectly” and to bar the defendants from participating in any penny stock offering. Epling and Perlowin will be permanently barred from serving as a director or officer of any public company as well.