SEC filings from Helix TCS (OTC: HLIX) revealed the historical financials for seed-to-sale software firm BioTrackTHC, which it announced it was acquiring in March in a deal with undisclosed terms at the time. The company closed the deal in early June, indicating that total 2017 sales for the combined company were $12 million.

Today’s amended 8-K filing indicated that the company, which is known legally as Bio-Tech Medical Software,  generated revenue of $7.79 million in 2017, with the combined firm generating total revenue of $11.8 million on a pro forma basis. BioTrackTHC sales, which consisted of $5.92 million in commercial revenue and $1.78 million in traceability revenue along with about $95K from vendor referral fees and Universal Contingency System sales in Washington, grew almost 48% over the prior year. The company reported an operating loss for the full year of $352K.

The filing also included financials for the first quarter of 2018 that revealed that growth slowed to just 7%, with sales increasing from $1.66 million to $1.77 million, which produced an operating loss of $40K: 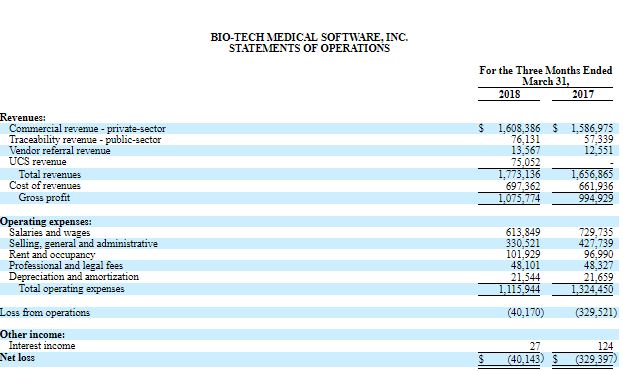 Helix TCS is expected to file its 10-Q in the next few days, and investors will learn sales for the full quarter for Helix TCS but for just one month for the acquired business. Today’s filing revealed that Helix TCS issued 38.2 million shares and assumed 8.1 million options related to acquire the company, with a total acquisition price of $57.55 million, or 7.4X 2017 sales. The Helix TCS balance sheet will see goodwill increase by $39.1 million due to the acquisition.

Flowhub Aims to Be the Square of Cannabis