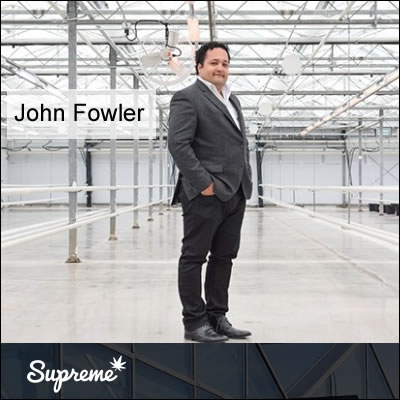 Matthew Kind of CannaInsider interviewed Supreme Pharma (CSE: SL) (OTC: SPRWF) CEO John Fowler, who is leading the Canadian licensed cannabis cultivator with a singular focus on serving the wholesale market with its 7 Acres facility in Kincardine, Ontario. Fowler’s former career as an attorney focused on commercial law was originally inspired by his interest in the constitutional rights of Canadian citizens to have access to medical cannabis.

7 Acres will be serving other licensed producers (LPs), providing them with wholesale cannabis and not focusing on the distribution to patients in ACMPR, the federally legal medical cannabis program, or consumers in the future. The company has working relationships with six other LPs that represent over 25% of current industry sales.

As a wholesale producer, maintaining low costs of production relative to the quality of the product are an essential part of the company’s strategy, which is based on its hybrid greenhouse production technology. 7 Acres employs modular rooms that use the sun as a primary source of lighting that is supplemented with artificial lighting. The facility is 350K sq. ft., and when it is fully built out should be capable of producing up to 100mm grams per year.

John spoke very highly of his team, mentioning Chairman Michael La Brier, Director Scott Walters and CFO Nav Dhaliwal, who brings not only a strong financial background but also expertise in technology, which Fowler believes is critical to succeeding in the industry. He also discussed his pricing strategy, which will be to allow his retailer customers to achieve a mark-up of at least 50%. He described the greatest challenge to the success of the company as its ability to scale production from just 20K sq. ft. to the full 350K sq. ft. capacity.

Listen to the interview or read the transcript of “”: http://www.cannainsider.com/john-fowler-supreme-canada/