While revenue and margins during the first quarter were impacted by the industry wide vape recall in Pennsylvania and front-loaded operating costs in New Jersey ahead of adult use, we expect revenue and margin to increase materially in the second quarter and beyond. 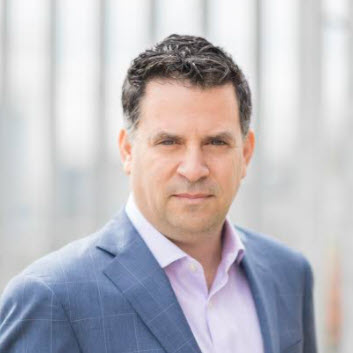 The strategic decisions and investments we have made over the last three years position us well for substantial growth in each of our four key markets – New Jersey, Pennsylvania, Michigan and Maryland.

Mr. Wild continued, “New Jersey adult use sales began on April 21st, a significant milestone for TerrAscend and the entire industry. Demand has been strong for our brands and our elevated retail experience. We recently introduced the first concentrates in the state and expect additional ‘first-in-state’ product introductions in the near future. In Pennsylvania, we continue to cultivate the highest quality flower in our history and have introduced new genetics, to which patients have reacted positively. In Michigan, Gage has positioned us as a leader in one of the largest cannabis markets in the U.S. Lastly, subsequent to the quarter end, we announced the acquisition of a medical dispensary in Maryland and 5 dispensaries in Michigan. These acquisitions exemplify our strategy of ‘going deep’ in the markets in which we operate. While remaining focused on organic growth, the dislocation in public and private company valuations should provide attractive M&A opportunities to accelerate growth in a financially disciplined way.” 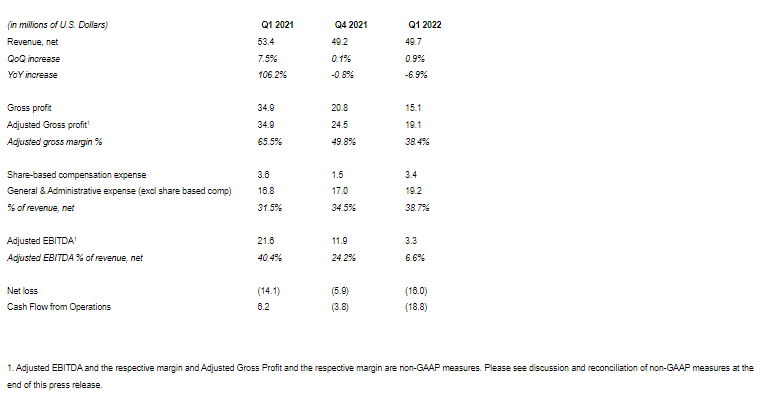 Net sales for the first quarter of 2022 totaled $49.7 million, up 1% sequentially and down 7% year over year, mainly related to the temporary impact of the vape recall on the Pennsylvania business, combined with the continued intentional accumulation of inventory in New Jersey, versus selling wholesale, in preparation for adult use sales. The Company’s Canadian business also experienced a soft quarter both sequentially and year over year.  The declines were partially offset by three weeks of revenue from the Gage acquisition, which closed on March 10th.

General & Administrative expenses, excluding stock-based compensation, were up $2.2 million, including Gage, versus the previous quarter. As a percentage of revenue, G&A increased to 38.7% in the first quarter of 2022 from 34.5% in fourth quarter of 2021. The increase as a percentage of revenue was impacted by flat revenue combined with front-loaded spending in New Jersey ahead of adult use and the addition of Gage for part of the quarter.

Adjusted EBITDA for the quarter was $3.3 million versus $11.9 million in the previous quarter. This reduction was mainly driven by gross margin compression in Pennsylvania related to lower volumes and front-loaded costs in New Jersey ahead of adult use sales, as well as intentional accumulation of inventory in the state in preparation for adult use sales.

Operating loss for the quarter was $10.0 million, driven by the mix of revenue resulting in compressed gross margin.

Net loss for the quarter was $16.0 million, mainly driven by the operating loss, accrued income taxes of $3.7 million, and finance and other expenses of $6.9 million, partially offset by a net gain on fair value of warrant liability of $5.7 million.

Cash and cash equivalents were $88.4 million as of March 31, 2022, compared to $79.6 million as of December 31, 2021, providing ample capacity to fund planned organic and inorganic growth initiatives.

Cash used from operations was $18.8 million for the three months ended March 31, 2022, mainly driven by working capital as the Company continued to prepare for adult use sales in New Jersey, as well as $8 million of interest payments.  The Company received $23.9 million in proceeds from warrants and options during the quarter while paying $3.3 million to terminate the lease in Frederick, Maryland in preparation for the transition to the new facility in Hagerstown.  A payment of $7.0 million was also made for the final earnout related to the acquisition of the State Flower business.

Capital expenditures were $4.2 million in the quarter, primarily related to the on-going expansion work at the Hagerstown, Maryland facility.

As of May 11th, 2022 there were 318.4 million basic shares outstanding including 252 million common shares, 14 million preferred shares as converted, and 52.4 million exchangeable shares.

Definition and Reconciliation of Non-GAAP Measures

In addition to reporting the financial results in accordance with GAAP, the Company reports certain financial results that differ from what is reported under GAAP. Non-GAAP measures used by management do not have any standardized meaning prescribed by GAAP and may not be comparable to similar measures presented by other companies. The Company believes that certain investors and analysts use these measures to measure a company’s ability to meet other payment obligations or as a common measurement to value companies in the cannabis industry, and the Company calculates Adjusted Gross Profit as Gross Profit adjusted for certain material non-cash items and Adjusted EBITDA as EBITDA adjusted for certain material non-cash items and certain other adjustments management believes are not reflective of the ongoing operations and performance. Such information is intended to provide additional information and should not be considered in isolation or as a substitute for measures of performance prepared in accordance with GAAP. The Company believes this definition is a useful measure to assess the performance of the Company as it provides more meaningful operating results by excluding the effects of expenses that are not reflective of the Company’s underlying business performance and other one-time or non-recurring expenses. 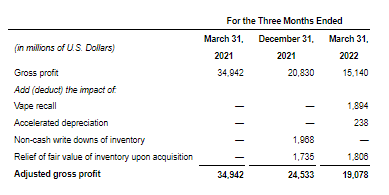 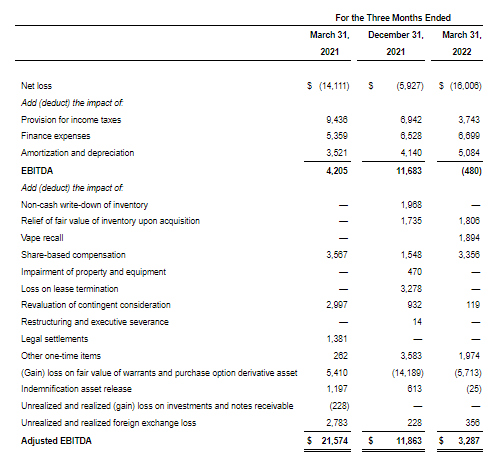 Caution Regarding Cannabis Operations in the United States

While the approach to enforcement of such laws by the federal government in the United States has trended toward non-enforcement against individuals and businesses that comply with medical or adult-use cannabis programs in states where such programs are legal, strict compliance with state laws with respect to cannabis will neither absolve TerrAscend of liability under U.S. federal law, nor will it provide a defense to any federal proceeding which may be brought against TerrAscend. The enforcement of federal laws in the United States is a significant risk to the business of TerrAscend and any proceedings brought against TerrAscend thereunder may adversely affect TerrAscend’s operations and financial performance. 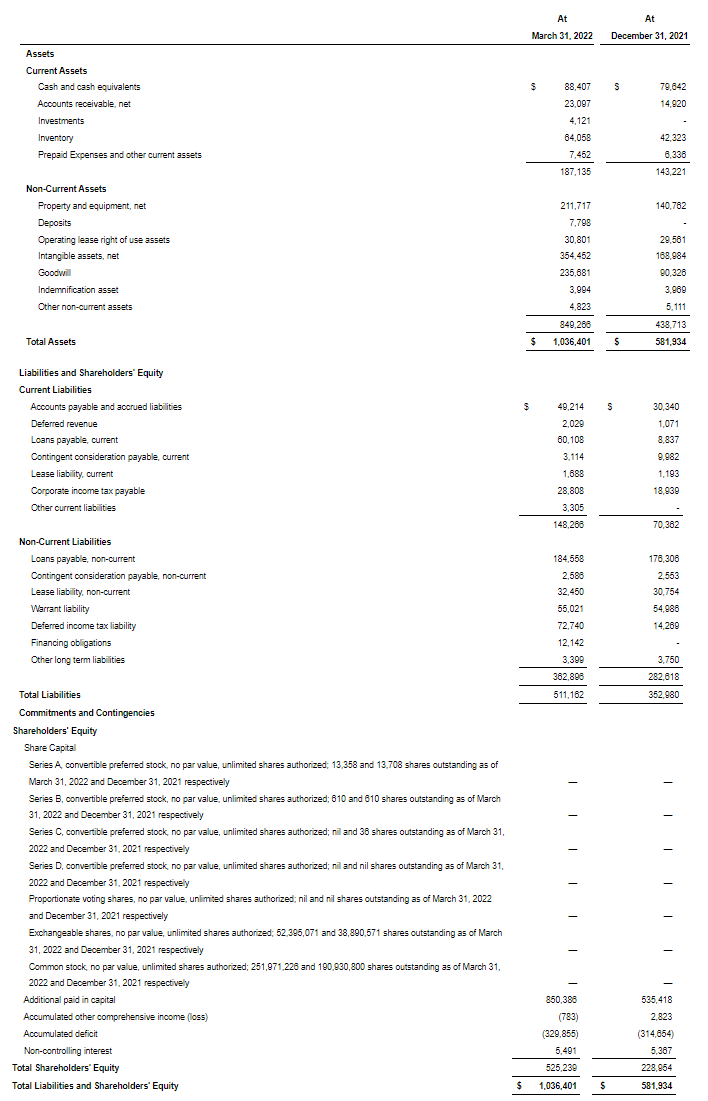 Unaudited Interim Condensed Consolidated Statements of Operations and Comprehensive Loss
(Amounts expressed in thousands of United States dollars, except for per share amounts) 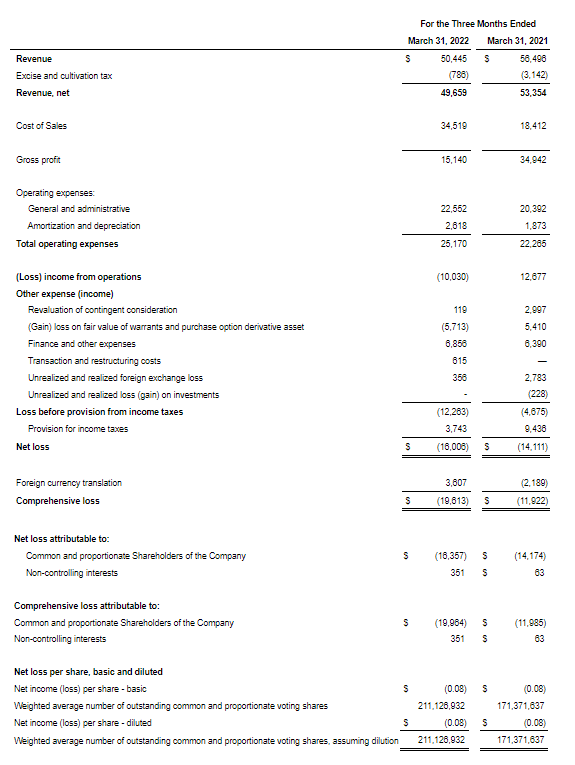 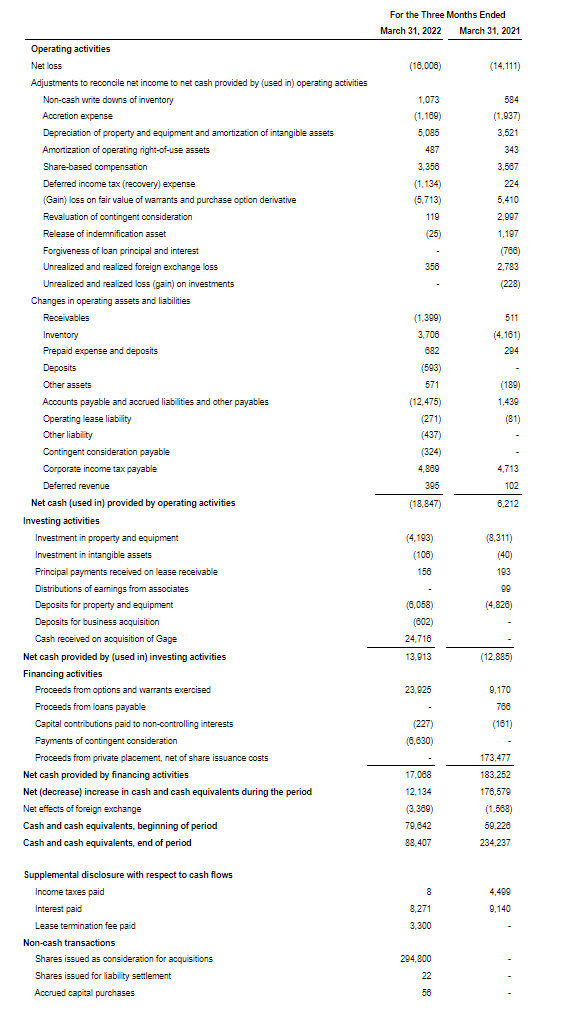