Minnesota legalized medical cannabis nearly six years ago.  Over the years, there have been several unsuccessful efforts to do the same for adult-use cannabis, and it appears that this year will be no different.

In January 2020, the leader of the Democratic-Farmer-Labor Party (DFL) announced they were drafting a bill that would add Minnesota to the list of states that have legalized, taxed and regulated the recreational use of cannabis. Although Gov. Tim Walz has said he supports the move, he faces an uphill battle with opposition from the Republican party. In this review, we take a look at the history of Minnesota’s cannabis program, the existing marketplace and potential for future growth.

Unlike Oklahoma, which has one of the most liberal cannabis laws in the country, Minnesota’s is considered to be among the most restrictive, due to the limited number of health conditions cannabis can be used to treat, the forms that are legal and the costs associated with its use, including a $200 license fee for patients. However, there is a reduced fee of $50 for those who qualify.

The first set of only nine medical conditions that qualified a patient were:

Other conditions were later added: 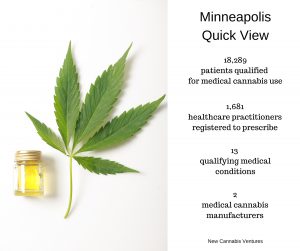 As of December 31, 2019, only 18,289 patients had registered for medical cannabis use (0.3% of the state’s population). By comparison, nearly 236,000 patients qualified as of Jan. 2020 in Oklahoma (6.0% of the state’s population). The majority of Minnesota’s cannabis patients (11, 807, or 65 percent) are using it for intractable pain. When this qualifying condition was added, participation in the program spiked considerably.

The average age of registered patients is 48.7 years, according to the Minnesota Department of Health. Patients must be certified by a healthcare practitioner and re-evaluated and re-certified annually.

Practitioners include: licensed physicians, physician assistants and advanced practice registered nurses (APRNs). As of Dec. 31, 2019, there were 1,681 healthcare practitioners registered, the majority of which (1,226) are physicians. Unlike in many other states, those certified are not listed by the state, so those who want to obtain a prescription have to do their own research.

Form factors are limited and include: pill, vapor oil, topical or liquid forms. However, starting this summer, cannabis powders, lozenges, gums, mints and tablets will be available. The program does not allow patients to access and use the actual plant or flower.

Only two medical cannabis manufacturers, Minnesota Medical Solutions, LLC, a Vireo Health Company (CSE: VREO) (OTC: VREOF) and privately held LeafLine Labs, LLC, were registered by the Minnesota Department of Health (MDH) on December 1, 2014. They are responsible for the cultivation, production, and distribution of medical cannabis in the state. They serve Minnesota’s 87 counties.

Minnesota Medical Solutions (MinnMed) operates distribution facilities, or Cannabis Patient Centers (CPCs), in four Minnesota cities: Minneapolis, Rochester, Moorhead, and Bloomington. The company recently announced “substantial price cuts” on many of its products, as well as a new line of oral spray products, in an effort to attract new patients.

Although some modifications to the law have taken place since Minnesota legalized medical cannabis, the program remains rife with limitations. They include a limited number of allowable conditions and the fact that use of the plant continues to be prohibited, which keeps costs high. Still, the additional qualifying conditions, the expansion of form factors and the doubling of the number of dispensaries should drive growth in 2020 following an expansion in 2019 of 27%.

MPG Consulting projected that Minnesota’s cannabis industry would result in sales of $426 million in the first year if adult-use cannabis was legalized, and that figure would grow to $1.2 billion by year five. It predicted $112 million in tax revenues for the first year, growing to $300 million by the fifth year.

Minnesota Democratic lawmakers have indicated they will continue to push for legalization this year. House Majority Leader Ryan Winkler announced a statewide Be Heard on Cannabis tour to “to hear from people in every corner of the state.” Rep. Winkler said he will introduce new legislation to legalize adult-use cannabis in 2020, though he has stopped short of predicting whether the legislation will actually make it to the House floor. Meantime, Senate Majority Leader Paul Gazelka has already indicated his opposition to legalization.