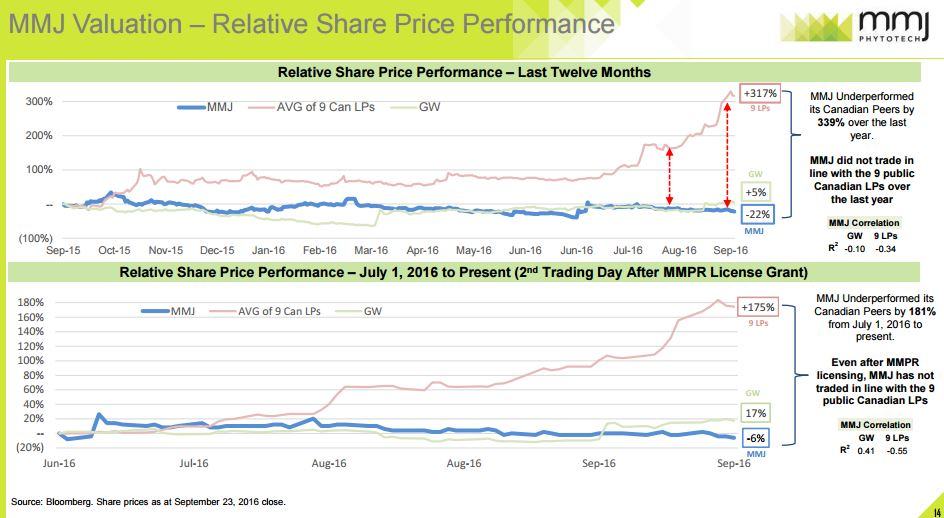 Perth, Sep 28, 2016 AEST (ABN Newswire) (MMJ PhytoTech Ltd (ASX:MMJ) (“MMJ” or “the Company”) is pleased to advise that it is set to unlock significant value for shareholders through the spin out of its core cannabis subsidiaries, United Greeneries Holdings Ltd (“UG” or “United Greeneries”) and Satipharm AG (“Satipharm”), on the TSX-V.

– Top Strike to become a large-scale cannabis producer targeting supply to the Canadian medical and recreational market, which is estimated to be an C$8b market by 2024

The transaction, which remains subject to a number of conditions, including shareholder approval, provides MMJ shareholders with exposure to the rapidly growing recreational and medical cannabis markets in Canada. Post spin out, MMJ shareholders will, through their shareholdings in MMJ, have an indirect ownership in a fully-financed, growth-focused cannabis company with two key operating brands in UG and Satipharm.

The aggregate sale price of UG and Satipharm (C$40 million) represents approximately 97% of MMJ’s current market capitalisation (undiluted and based on a share price of A$0.24).

– Post transaction, MMJ shareholders will have significant exposure to two of the largest commercial opportunities in the global cannabis sector.

– TSX-V listing to fast-track growth of both UG and Satipharm cannabis brands respectively, with robust growth pipelines and near-term revenue generating opportunities to be realised.

– Direct exposure to Canadian capital markets to be a significant value catalyst;

– Combination of UG and Satipharm brands in the resulting issuer for capturing the entire spectrum of the Canadian recreational and medical cannabis market is expected to create a competitive advantage over single brand competition and to leverage Satipharm’s oral delivery assets into the recreational market.

– Canadian listing will provide MMJ with a platform to trade in line with TSX-listed Peers[1];

– Top Strike will acquire 100% of the issued and outstanding common shares of United Greeneries Holdings Ltd and Satipharm AG from MMJ.

– United Greeneries and Satipharm will become wholly-owned subsidiaries of Top Strike and Top Strike will be re-named.

– Additionally, Top Strike will reimburse MMJ for additional funds spent on the United Greeneries and Satipharm businesses prior to the transaction closing.

– Top Strike will undertake a concurrent equity financing for minimum gross proceeds of C$15,000,000 through the issue of shares at a price not less than C$0.125 each (“Financing”).

– Completion of the transaction is subject to receipt of all required regulatory and shareholder approvals and other certain conditions precedent (including due diligence, completion of the Financing and execution of a definitive agreement).

The Canadian medical cannabis market is one of the most highly regulated and favourable operating jurisdictions globally. At present, there are 34 approved companies operating under the current regulatory framework, of which 10 are publicly listed in Canada.

The medical cannabis market in Canada is expected to grow to C$3 billion in annual sales by 2024, with new patient enrolments in 2016 increasing by an average of 5,000 new patients per month – a total of 75,000 patients are enrolled at present.

A significant value catalyst for LP’s will be the regulating of the Canadian recreational market, which has a conservative estimated value of circa C$5 billion per annum.

The Canadian government has committed to the introduction of the new recreational regulatory system by the second half of calendar 2017. It is expected that existing LP’s under the current regulatory framework will have a strategic first-mover advantage as early stage suppliers to this recreational market.

The proposed TSX-V listing is designed to allow for greater direct market value comparisons between MMJ’s world-class cannabis assets and existing TSX-V listed cannabis producers, while ensuring that the MMJ continues to benefit from the synergies of its vertically integrated business model.

Black Spruce have established a strong track record in the execution of mergers and acquisitions, and the firm’s deep relationships into the Canadian capital markets will play an instrumental role in the successful completion of the transaction.

The Company expects the RTO transaction to be finalised and the resulting issuer to be traded on the TSX-V by no later than the end of December 2016.

“The Company’s decision to pursue the listing of United Greeneries and Satipharm on the TSX-V will be a transformational transaction for MMJ, aimed at delivering significant value appreciation to our shareholders.

The transaction provides MMJ shareholders with the opportunity to benefit from the significant value currently being realised by TSX-V listed cannabis producers such as Aphria, Canopy and Aurora. The Board has been assessing the merits of obtaining a public listing in Canada for some time, and Top Strike represents a compelling and timely opportunity.

We are very confident that our strategic market positioning and our capacity to rapidly scale up cannabis production at Duncan will be a major value catalyst for MMJ’s shareholders in the near-term, and we look forward to providing further updates in due course.”

To view the latest Investor Presentation regarding the TSX-V listing, please visit:
http://abnnewswire.net/lnk/3Z8CVZR7

It’s United Greeneries subsidiary has growing facilities in Canada and is fully integrated with Agrichem Analytical, its quality control and testing laboratory. Satipharm has a number of key international distribution partnerships for the distribution of cannabinoid-based pharmaceutical, nutraceutical and wellness products.

Through its PhytoTech Therapeutics subsidiary in Israel the Company has an exclusive research and licensing agreement with Yissum, the prestigious Research Development and technology transfer Company of Hebrew University in Jerusalem, Israel, a global leader in medical cannabis research.