GW Pharma (NASDAQ: GWPH) (LON: GWP) will soon announce the results from the first of four Phase 3 clinical trials for Epidiolex, its antiepileptic drug targeting seizure reduction for patients with rare forms of childhood epilepsy. Epidiolex has received orphan drug designation from the FDA for Dravet and Lennox-Gastaut syndromes, meaning that if it is approved it will be the only similar drug allowed on the market to treat those diseases for seven years from its approval.  The company has reported favorable safety and efficacy data from its expanded access program, which has allowed doctors at 22 sites to provide the medicine to 375 patients as of early February, but these studies were not randomized and double-blinded, criteria that are necessary to determine the effectiveness relative to placebo in order to gain FDA approval.

The first trial, which enrolled 120 patients (twenty more than originally anticipated), tested the efficacy of Epidiolex against placebo for seizure reduction for patients with Dravet syndrome.  This slide, from the January investor presentation, details the trial design, though it reflects the initial enrollment goal of 100 patients: 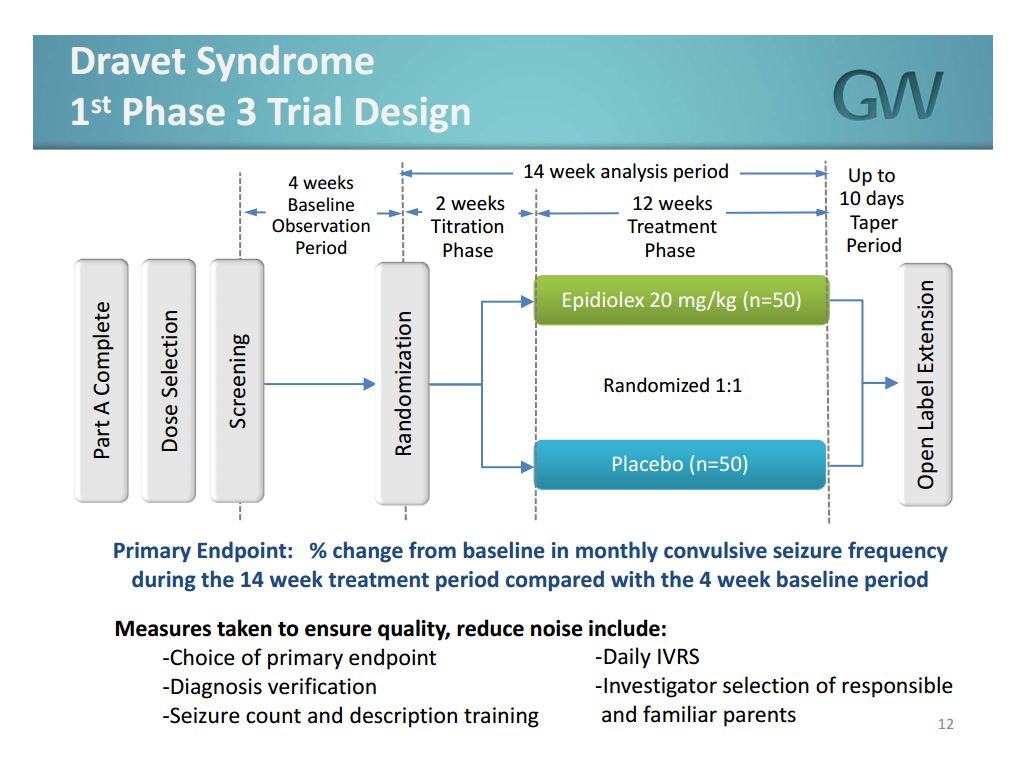 The company has stated that it will report top-line results in March.  It has two Phase 3 trials for Lennox-Gastaut that should be reported in Q2 followed by a second Dravet trial in the second half of the year.  If the data is positive, the company expects to file a New Drug Application (NDA) with the FDA in Q4, though it alluded to an expedited filing during its Q1 conference call in February should the data warrant doing so.  The company is also initiating a Phase 3 trial for Tuberous Sclerosis Complex in Q1.

GW Pharma’s stock has been under significant pressure over the past nine months, peaking near 134 and now trading lower by 70%.  Part of this reflects the weakness in the overall biotech market, but failures to achieve primary endpoints in Phase 3 trials for Sativex have also weighed on investor sentiment.  The stock is down about 43% YTD: 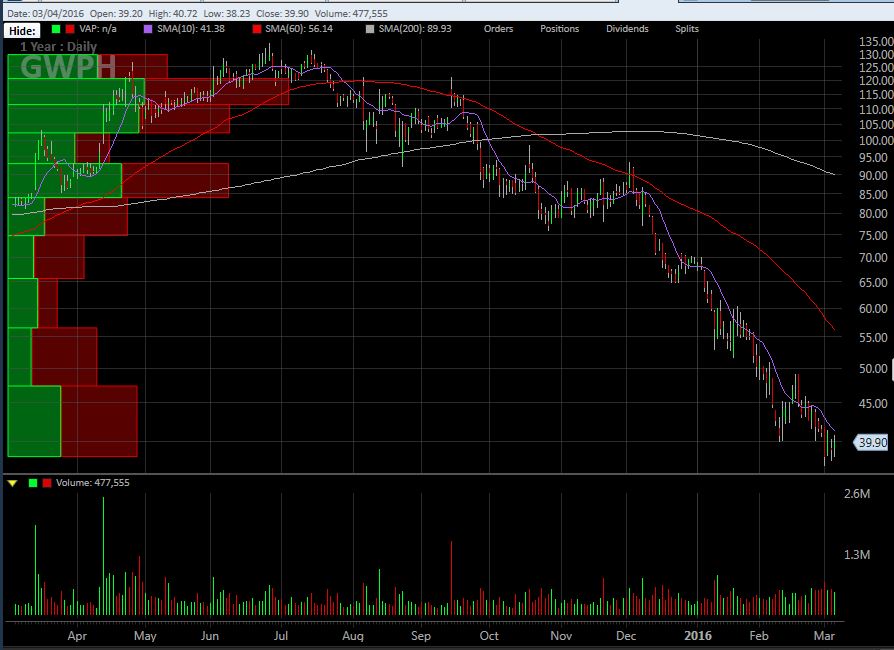 Investors and traders in GWPH should be prepared for some volatility in the weeks ahead. The data could be so compellingly strong that it leads to an expedited NDA filing, but it could also suggest that Epidiolex is unable to show statistically significant efficacy.  While Epidiolex has more shots on goal given the remaining trials and the fact that the company is able to combine the results of the trials, if necessary, the market could react very negatively if the first trial fails to achieve its endpoints.