44 companies currently qualify for inclusion, with 35 filing in U.S. dollars and 9 in the Canadian currency, which is up from 41 when we reported a few weeks ago. We added  five names that report in American dollars, including Verano Holdings (CSE: VRNO) (OTC: VRNO), Ascend Wellness (CSE: AAWH.U), The Parent Company (NEO: GRAM.U) (OTC: GRAMF), Schwazze (OTC: SHWZ) and Vireo Health (CSE: VREO (OTC: VREOF). We removed Supreme Cannabis (TSX: FIRE) (OTC: SPRWF) and Zenabis (TSX: ZENA) (OTC: ZBISF) due to their revenue level slipping below the minimum. Note as well that TerrAscend (CSE: TER) (OTC: TRSSF) moved from being a Canadian dollar reporter to American dollars. Also, we have left Aphria in the Canadian section for now, but we will remove it when Tilray (NASDAQ: TLRY) reports in July. Additionally, we have left GW Pharma in the American dollar reporting section and will remove it or replace it with its acquirer, Jazz Pharmaceutical (NASDAQ: JAZZ), depending upon how they break out its financial performance.

Since our last update, several companies that report in American dollars provided quarterly financials, including, among the largest revenue-generating companies, Scotts Miracle-Gro (NYSE: SMG), Curaleaf Holdings (CSE: CURA) (OTC: CURLF), Green Thumb Industries (CSE: GTI) (OTC: GTBIF), Trulieve (CSE: TRUL) (OTC: TCNNF), GW Pharma, Verano Holdings (CSE: VRNO) (OTC: VRNOF) and Hydrofarm (NASDAQ: HYFM), all of which reported revenue in excess of $100 million. The reports of these companies and others that have reported showed how the industry is scaling, which we discussed in our most recent weekly newsletter. 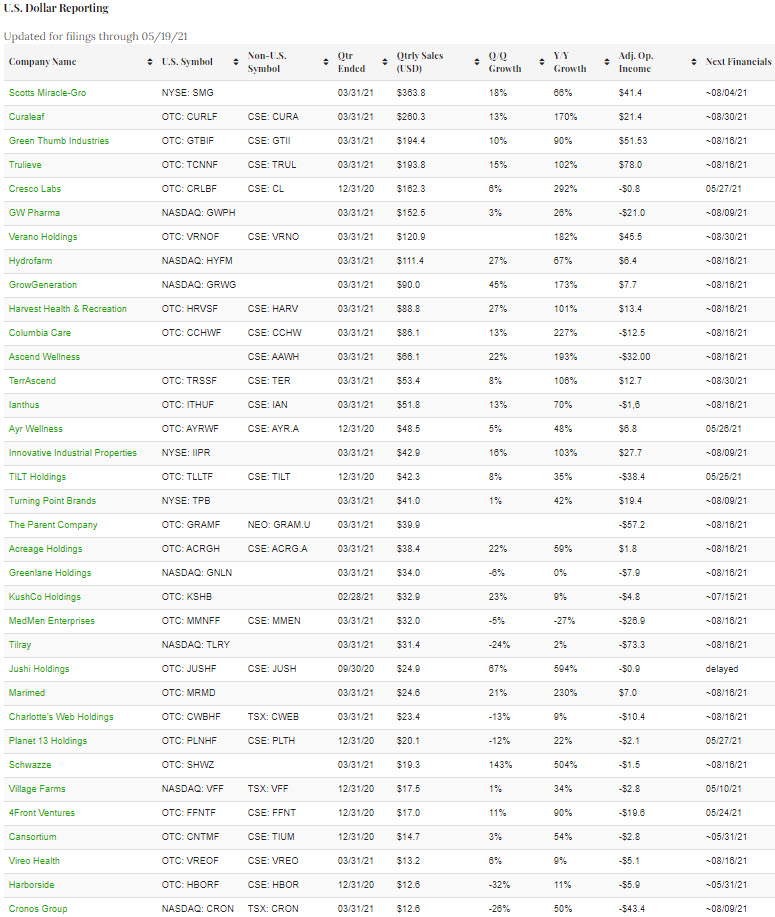 While most of the reports are behind us, several more companies will be reporting over the balance of the month. Among the companies generating the highest levels of revenue that are expected to report during the rest of May are Cresco Labs (CSE: CL) (OTC: CRLBF), Ayr Wellness (CSE: AYR.A) (OTC: AYRWF) and TILT Holdings (CSE: TILT) (OTC: TLLTF).

In May, Aurora Cannabis (TSX: ACB) (NYSE: ACB) reported a large and surprising decline in revenue, which had been forecast to be C$71.3 million. The weakness was the result of its adult-use business, which declined more than 50%. Tilray and Cronos Group, included among the companies above that report in American dollars, also disappointed investors with their financial reports that were marred by weakness in adult-use.

On June 1st, the largest Canadian LP, Canopy Growth (TSX: WEED) (NASDAQ: CGC) will report its fiscal Q4 ending 3/31. According to Sentieo, the company will increase revenue by 44% compared to a year ago and 1% sequentially to C$155 million. Adjusted EBITDA is expected to improve to -C$64 million compared to -C$68 million in its fiscal Q3.

For those interested in more information about companies reporting in May, we publish comprehensive earnings previews for subscribers at 420 Investor, including for Focus List members Canopy Growth, Cresco Labs and TILT Holdings.