Research analyst Derik De Bruin, who has been at Bank of America Merrill Lynch as its lead analyst for the Life Sciences Tools and Diagnostics sector since 2011 following a nine-year stint in a similar role at UBS, issued along with several other analysts at the firm what appears to be the first research piece on the cannabis industry from a major Wall Street Firm.

The 45-page report, Medical cannabis has high POTential: a joint biotech & tools primer, covered a lot of ground, but it was short on actionable ideas.  The table of contents reveals that it really was more of a background piece: 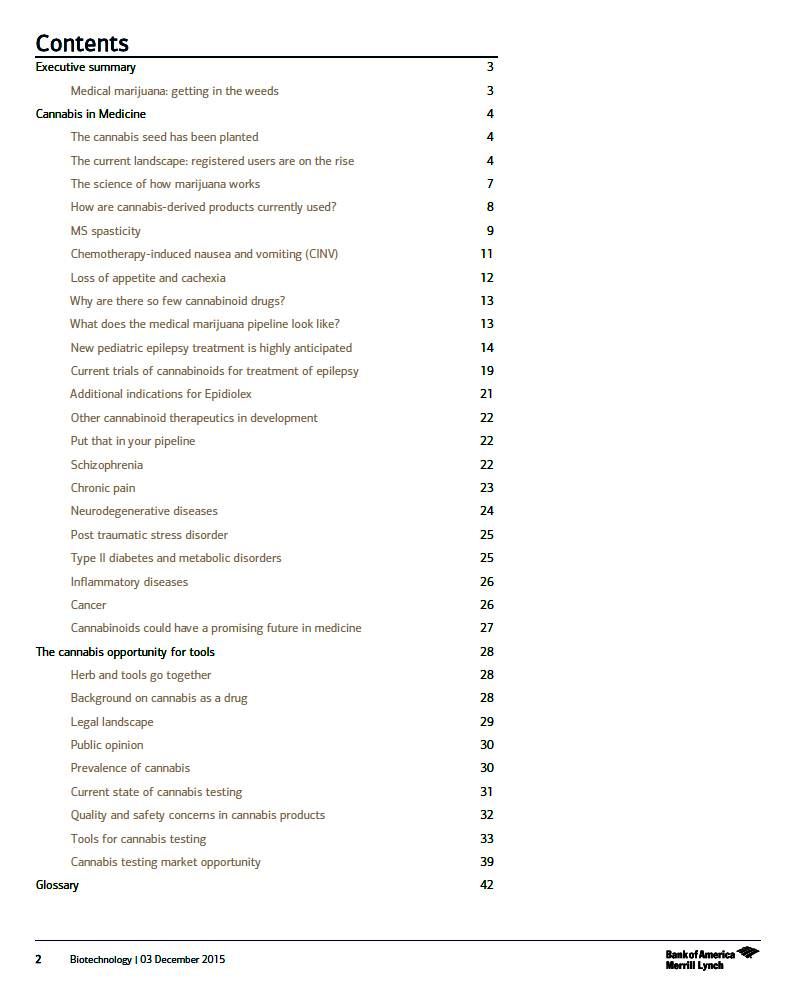 The report covers publicly-traded GW Pharma (NASDAQ: GWPH) extensively, but there is no recommendation provided.  It also mentions peers Insys Therapeutics (NASDAQ: INSY) and Zynerba Pharmaceuticals (NASDAQ: ZYNE), both of which are developing drugs with synthetic cannabinoids (not plant-derived like GW Pharma’s products).

Several publicly-traded companies that manufacture equipment used by cannabis testing labs could benefit from what supplying what the firm says could be a $50-100mm opportunity, including Agilent (NYSE: A), Thermo (NYSE: TMO) and Waters (NYSE: WAT), which are covered by the firm, as well as Bruker Corp (NASDAQ: BRKR) Danaher (NYSE: DHR) and PerkinElmer (NYSE: PKI).

The report doesn’t provide details about individual testing labs, but it shared a bullish sentiment on the industry, which it called “highly fragmented and rapidly evolving.”  It mentioned publicly-traded companies CannLabs (OTC: CANL), which is defunct though the report failed to mention that fact, as well as DigiPath (OTC: DIGP) and Signal Bay (OTC: SGBY), along with Steep Hill, The Werc Shop and Green Standards Diagnostics, all of which are privately-held.

The cannabis industry is poised for growth if cannabis legalization and use expand. As the cannabis industry expands, we expect to see a corresponding increase in cannabis medical research and the implementation of cannabis testing and labeling regulations, which should drive adoption and growth of life sciences tools within this market in our view.

While the opportunities for the life sciences tools companies that are equipping the lab testing industry pale in comparison to their current revenues, perhaps the cannabis industry can help boost growth at least slightly.

The significance of the report is that it brought what many who are following the industry already know to a more mainstream audience.  By focusing on the science of medical cannabis and sharing the solid ideas regarding the potential for GW Pharma and for testing labs, Merrill Lynch may be setting the stage for a broader and more institutional set of potential investors as the legal cannabis industry continues to evolve.