TORONTO, Feb. 20, 2019 (GLOBE NEWSWIRE) — Wayland Group (CSE:WAYL) (FRANKFURT: 75M) (OTCQB:MRRCF) (“Wayland” or the “Company”) is pleased to announce a corporate update on its operational progress in Canada and internationally.

The Company is now completing a third harvest at its new facility in Langton, ON, Canada, with licenses for cultivation and business to business sales received in April 2018 and December 2018 respectively. The Company, in partnership with Industrial Automation Solutions (IAS New York Inc.), of Rochester NY, and their partner Rockwell Automation, have completed a proof of concept (“POC”) for both the facility and automation platform. Average yields from such POCs, among three different strains are 50 grams per plant. The cultivation concept has been modified to a Screen of Green where greater plant density and thereby greater yield is achievable per square foot at the facilities. Throughout these POCs, each cultivation period totaled 17 weeks from start to finish (the “Periods”). These Periods consist of ten (10) days for clones to root, 5 weeks for vegetation to complete and 11 weeks for the flower cycle prior to harvesting. All stages of cultivation were completed in the same rooms, demonstrating the facility’s versatility to conduct every stage of cultivation in each room. As the plants on average produced 50 grams per plant, with 9,000 plants in 8,800 sq. ft rooms annual production average for flowering areas is now 286 grams per sq. ft. per year. The POCs have demonstrated that on an annualized basis, the Company’s Langton facility, once fully licensed for Phase 1-A through Phase 1-D (set out in Graphic 1 below), will be able to produce 23,731 kg of dry cannabis flowers to be used in the production and sale of packaged dry flower and cannabis oil. It is expected that with further phenotyping of genetics, in addition to nutrient optimization, such yields will continue to increase. 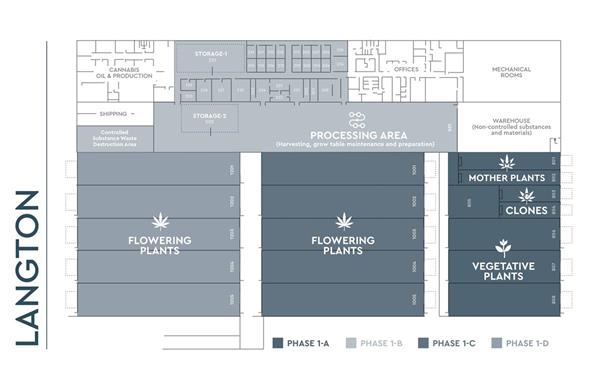 The Company is currently harvesting 8,200 plants, with product from these plants anticipated to be ready for the market no earlier than April. In addition to the current harvest, the Company has planted an additional 21,700 plants and will re-fill the current harvested room with 8,300 plants in mid-March in order to fill the balance of the currently licensed area. The Company expects to request inspection for readiness by Health Canada of the Phase 1-A area in March of this year. As the timeline for the required amendments to such licenses has ranged from 30-45 days to approximately 120 days for the Company’s last request for an amendment, the Company has updated its timing expectations for amendments to its licenses. Due to this potential for significant delay, the Company has made necessary changes to its internal processes.

In Q4 of 2018 the Company generated revenues of $1,305,033 net of discounts and returns. Full financials for the quarter will be released during the first week of April. Looking forward into 2019, the Company anticipates revenues of $2,700,000 in the 1st quarter, $6,900,000 in the 2nd quarter, $7,700,000 in the 3rd quarter, and growing to $20,600,000 in the 4th quarter of 2019. The Company also anticipates that its revenues will increase substantially quarter over quarter as more of the facility is filled with plants, and consecutive harvests are completed. The Company maintains supply agreements with four Canadian Provinces, and a German importer of cannabis. As noted in the Company’s press release of February 7, 2019, Wayland was awarded their second Good Manufacturing and Good Distribution Practices certified facility from the State of Saxony, in Germany. These certifications provide Wayland with the foundation to start selling product into the lucrative German and other developing European markets with drastically shorter lead times and greater margins.

Wayland has also entered into an agreement to obtain additional funds to support the expansion of the Company’s global footprint and fund development of its flagship Langton facility. This agreement is with certain investment funds managed by Alpha Blue Ocean Inc. (“Alpha Blue”) a money manager based in London, United Kingdom with a strong track record of partnering with public companies and delivering meaningful value to their shareholders.

ABO could not be prouder to have selected Wayland as a long-term investment to our portfolio. We are particularly convinced by their European endeavors to replicate their successes in Canada and capture meaningful market share as they are first movers in the world’s most exciting medical cannabis market. We will work tirelessly to provide Wayland the support they need, both financially and commercially, to capitalize on their leading position in Europe. 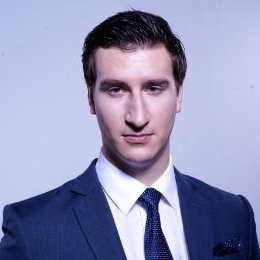 The debentures under each of these facilities will be non-interest bearing, have a maturity date of one year from issuance and will be convertible by Alpha Blue into common shares of Wayland until maturity at a conversion price determined based on the market price of Wayland’s common shares from time to time. The debentures may also be reimbursed in cash prior to the maturity (i) upon certain events of default and (ii) subject to a 10% premium at the option of Wayland, and, at maturity at the election of Wayland. Pursuant to its agreement with Alpha Blue, in connection with the first closing Wayland issued 1,851,851 warrants to Alpha Blue having a three-year term and 740,740 warrants having a five-year term. Each of these warrants is exercisable for one whole common share at an exercise price of C$1.35. In connection with the closing of each subsequent facility, Wayland will issue warrants to Alpha Blue having a five-year term and entitling Alpha Blue to acquire C$1 million of common shares, with the number of warrants to be determined based on the market price of Wayland’s common shares at the relevant time. The subscription price for each debenture under the facilities is 95% of its face amount. Wayland has paid a commitment fee of 2.5% of the full aggregate principal amount of the debentures and a facility fee of 2.5% of the aggregate principal amount of debentures issuable under the first facility. A 2.5% facility fee for the subsequent facilities will be payable on that facility’s closing date. The funds under these facilities may be used for capital expenditures and for general corporate purposes. Further information regarding the financing can be found in the subscription agreement posted on SEDAR.

This financing ensures the Company has adequate financing through to cash flow from its operations, including what is received as a result of cultivation from its Langton facilities.

For more information about Wayland, please visit our website at www.waylandgroup.com