Two months ago, cannabis stocks, as measured by the 420 Investor Cannabis Stock Index, were down in the dumps. At their trough, the index, which currently has 27 members (based on a minimum price and minimum average daily value traded that were weighted equally at the last quarterly rebalancing on March 31), had declined by more than 20% from the year-end level.  Now, the stocks are up more than 13% despite giving up a lot the gains since peaking at up 30.2% YTD on April 18th. That move represented a jump of 63% in just 9 weeks.  Life in the market! 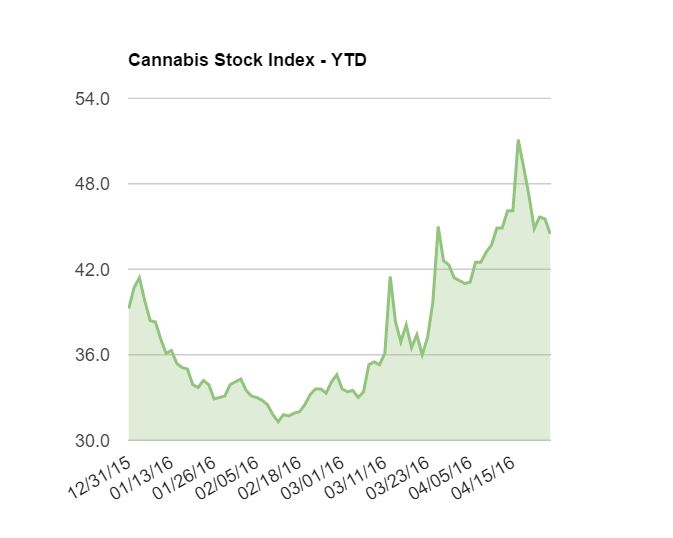 Though April still has three trading sessions, it is on track to notch its third consecutive monthly gain.  In the past two years, the only other gains were in October of 2014 and October of 2015. Before addressing the causes of the rally and considering its sustainability, it’s important to put it into context: 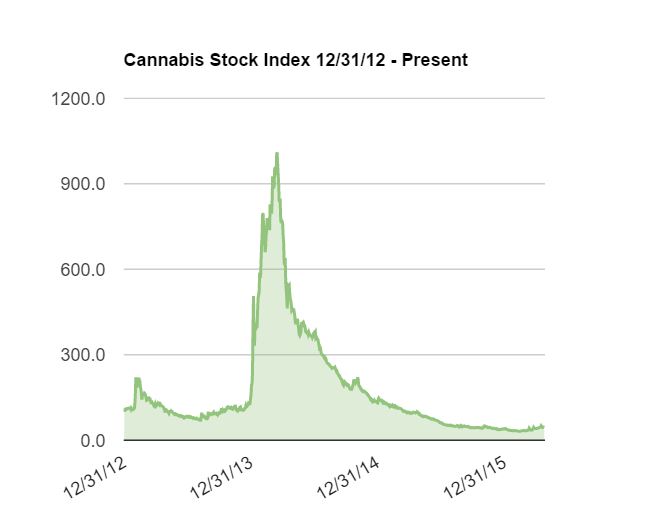 Cannabis stocks in their short history have a tendency of explosive rallies followed by protracted declines.  In early 2013, they doubled very quickly before wiping out the entire rally and then some over the next six months.  In early 2014, the index exploded as the doors to the retailers opened in Colorado.  Quite simply, too many investors crowded into too few stocks, almost none of which were good deals even when the rally started. The index peaked at 1010, representing a gain of 535% in about 80 days.  While the average stock rallied this much, it wasn’t uncommon to see some stocks that rose 2000-3000%.

As the number of “cannabis stocks”, which weren’t really cannabis stocks at the time in the sense that many weren’t even real companies and the rest weren’t growing or selling cannabis, exploded, the prices imploded.  That 23-month decline to the recent low represented a 97% loss from the peak. The market could rally a lot further and still be in the hole, as it is down even after the recent rally by still 95.6%.

Some might argue that the stocks finally reached a point where they represented “good value”, but I will take the other side for the vast majority of the stocks.  The recent rally was very technical in nature, with some explosive rallies in stocks with a small number of shares in the “float”, which are shares not subject to lock-up or holding restrictions. Some good examples of this have been Cannabis Sativa (OTC: CBDS) and Pineapple Express (OTC: PNPL), though both of these were introduced in April and weren’t in the index during Q1. Quite simply, several traders and trading services have refocused on the cannabis sector.  Here’s why:

So, a confluence of events led to a powerful rally from very depressed levels. Cannabis stocks don’t yet match the fundamentals of the overall industry and are highly speculative, appropriate for traders rather than investors.  The technicals have improved dramatically over the past few months, and the DEA rescheduling potential could keep traders engaged for the next two months.  While the summers tend to be tough on cannabis stocks, it seems likely that dips could be modest in front of the elections later this year.  Keep your eyes on the Cannabis Stock Index, which you can bookmark, as it may post its first winning year since 2013.