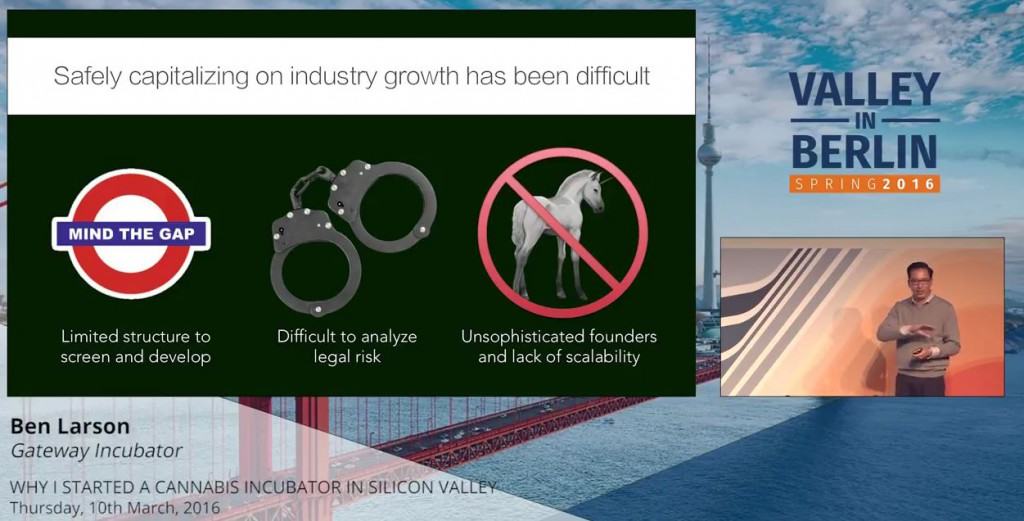 Ben Larson, one of the founders of cannabis industry incubator Gateway in San Francisco, spoke at Valley in Berlin, a one day conference in Germany bringing together interesting Silicon Valley speakers with startups, founders, investors, mentors & politicians from around the world, on March 10th. Ben, who worked two years at The Founder Institute, helped launch over 20 startups by leading semesters in San Francisco and Silicon Valley in the four month program.

Ben began the talk (posted below) with a discussion of Charlotte Figi, the child for whom high-CBD strain Charlotte’s Web was named, and then a close friend of his, Nigel, who suffers from an invasive brain cancer that causes seizures, setting the tone for his inspiration in launching his incubator last year. Gateway will soon announce its first class. The company caters to both direct cannabis companies as well as ancillary companies and offers co-working space in its Oakland office.

Gateway wants to help the cannabis industry have a new face and voice of trust by creating world-class entrepreneurs.  Larson suggest that if cannabis were legal today, it would be a $40 billion industry.  Deal flow has been hurt by lack of structure in the industry, with just one other good company operating in the incubator/accelerator space (CanopyBoulder).  Investors find the legal risk tough to analyze, and the industry has unsophisticated founders with businesses that lack scalability.

As cannabis tends to be a community-driven experience, Larson expects the industry to be collaborative. Of 150 applications initially, 25% were ancillary while the balance were directly in the industry.  When asked about the big opportunities, Larson suggest that it is early and that there are no “Google” or “Facebook” for the industry yet. Finally, transparency is necessary as the cannabis industry investors tend to be shady.

Cannabis Startups to Compete for $10,000 Prize at New West Summit