This is a copy of the June 16th edition of our weekly Newsletter, which we have been publishing since October 2015.

After a fantastic start to the year, cannabis stocks have been reversing out gains thus far in Q2, with the multi-state operators under intense pressure, especially this month: 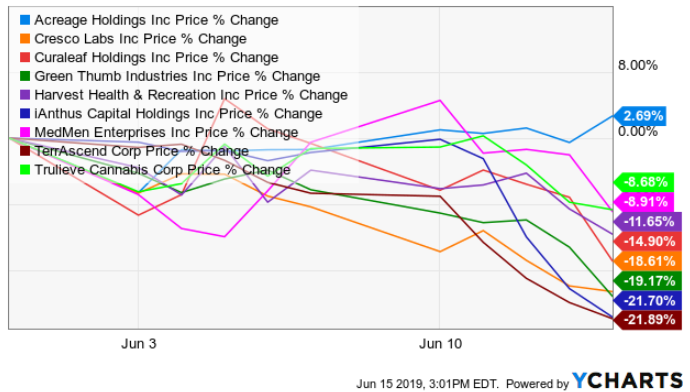 Most of the largest MSOs have declined by more than 10% in the first half of June, with four down by more than 18%. While some of the declines have company-specific causes contributing as well, we believe that two factors are weighing heavily on the space, antitrust concerns and tight floats loosening up.

We haven’t heard much, if any, media discussion of antitrust concerns, but there have been several examples of second requests for information by the Department of Justice that are slowing down deal closings. We find it very odd that the DOJ is getting involved at all given that the industry is federally illegal, but we don’t make the rules. Just this past week, Cresco Labs announced a delay in the closing of its acquisition of Origin House. MedMen is still waiting to close the PharmaCann acquisition announced in late December. Harvest Health and Recreation had to push out the expected closing date of its Verano Holdings acquisition. 4Front and Cannex Holdings have also seen their merger delayed for this reason. Delayed closings mean delayed revenue and delayed synergies, and investors, who ran up some of these stocks after the deals were announced, are, not surprisingly, walking back their eagerness. From what we understand, the deals will close, but the DOJ is trying to better understand the structure of the industry.

The second reason for pressure on the stocks, unlocking of shares, is a topic we have discussed here before. Most of the MSOs have gone public with extremely large founder stakes relative to the overall size of the shares outstanding, with these ownership positions usually held in the form of voting shares that are convertible to the subordinated shares. The tight float of stock and the strong demand for shares has resulted in volatility to the upside. Ultimately, though, as the float increases, supply and demand come into better balance. When one stock gets pressured by its float expanding, it can impact all stocks, as often holders of related companies will consider swapping their position into the declining stock, given that the relative valuation improves as the stock with the increased float declines.

We think this shifting float is the more important cause for the recent decline in the MSOs. On its call in late May, Harvest CEO Steve White discussed that 18 million shares held by insiders and long-term investors would become freely-trading soon along with 50 million shares issued in November to pay for acquisitions. He suggested that the company expected 20 million of these shares in total to hit the market. On June 5th, 13.3 million shares traded on the CSE, reflecting a planned transaction we believe.

Neither of these two issues should have a long-term impact on the stocks. Chasing the momentum in the MSOs at the end of Q1 was not a good strategy, and we think that this double-whammy hitting the stocks now will likely prove to be a buying opportunity.

Harvest One continues to focus on a global health and wellness strategy. Its subsidiary, United Greeneries, maintained strong recreational sales as the company builds out capacity with the Mission Road and Lucky Lake facilities. Satipharm commenced selling the company’s CBD Gelpell capsules online in the UK and Europe and Dream Water began to post revenues and continues to add key accounts to its retail distribution network. The company expects the initial load ins from these new accounts will be reflected in their fiscal Q4 revenues.

To learn more about Harvest One, a client of New Cannabis Ventures, visit the company’s Investor Dashboard that we maintain on its behalf and click the blue Follow Company button in order to stay up to date with their progress.