Following twelve consecutive monthly declines and then a modest gain in April, the American Cannabis Operator Index extended its rally off of its all-time low set in March, increasing 34.7% to 30.20 during May: 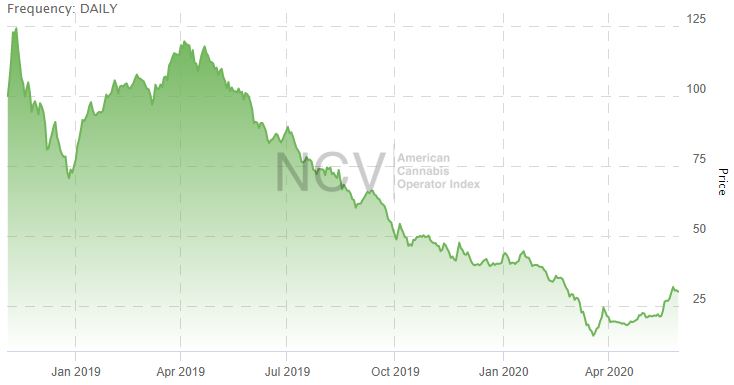 During May, the index included 14 companies, including 11 multi-state operators (MSOs) and 3 focused solely on CBD extracted from industrial hemp. Ten companies posted double-digit percentage gains, and each of the stocks advanced during the month: 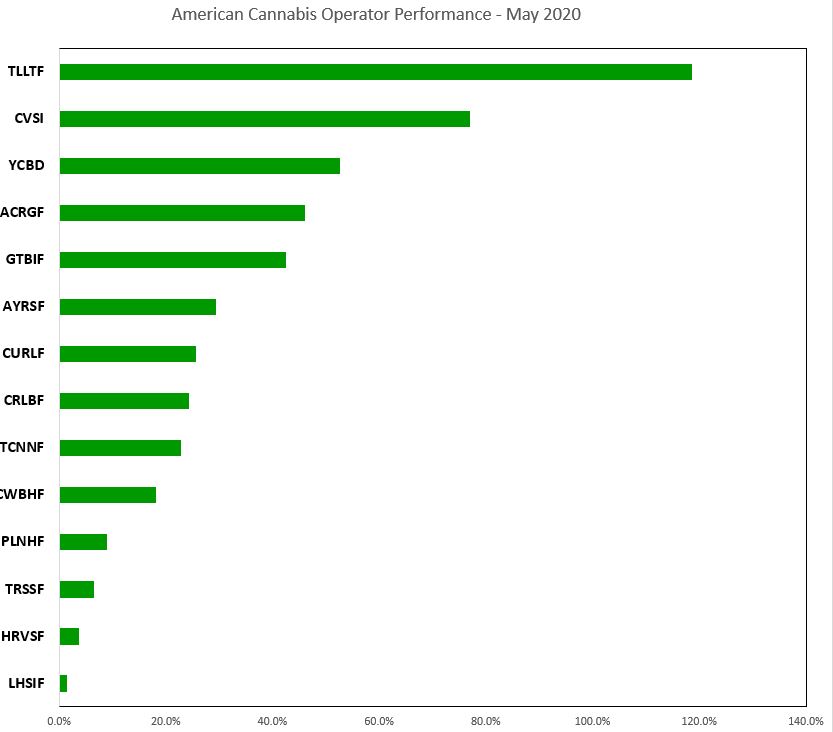 The four best performing stocks included TILT Holdings (CSE: TILT) (OTC: TLTFF) CV Sciences (OTC: CVSI), cbdMD (NYSE American: YCBD) and Acreage Holdings (CSE: ACRG) (OTC: ACRGF). TILT Holdings, which is now up 60% in 2020 after its almost 119% gain in May, didn’t release any news during the month and has delayed filing its year-end financials. CV Sciences had pulled back after its Q1 financials were released but rallied explosively late in the month along with the CBD sub-sector. It is now down about 8% in 2020. Similarly, cbdMD, which is now down 35% year-to-date, lifted along with other CBD companies in the back half of the month. Acreage, which was one of the worst performers in both March and April, rebounded in May but remains down over 44% year-to-date.

The four worst performing stocks all posted gains. Liberty Health Sciences (CSE: LHS) (OTC: LHSIF), which will report its fiscal year-end financials in June, didn’t release any news. The company had 9.7% share of the flower market and 5.6% of the medical cannabis THC market in Florida during the last week of May compared to 13.5% and 4.6%, respectively, in late December. That market has seen the volume of flower increase dramatically since late December, with the volume increasing 81%, while THC derivatives have increased by 26%. The stock is down almost 22% year-to-date, in line with the cannabis sector. Harvest Health and Recreation (CSE: HARV) (OTC: HRVSF), a big winner in April, held onto some of the gains despite pulling back after it filed its financials mid-month. The stock is down over 55% year-to-date. TerrAscend (CSE: TER) (OTC: TRSSF), which is up almost 6% year-to-date, reported its Q1, in line with its pre-announcement, and guided Q2 revenue to increase 29% to C$45 million. The company also raised US$37 million through the sale of convertible preferred units. Planet 13 Holdings (CSE: PLTH) (OTC: PLNHF), which will report its Q1 on June 1st, has declined over 35% this year as the Las Vegas tourism market has shut down due to the pandemic. The company moved forward on a deal it renegotiated to acquire a dispensary license in Santa Ana, California.

For June, the number of names in the index will will increase to 18 with the returns of iAnthus Capital (CSE: IAN) (OTC: ITHUF) and MedMen (CSE: MMEN) (OTC: MMNFF), both of which had fallen below the minimum price and had been removed in May, the return of 4Front (CSE: FFNT) (OTC: FFNTF), which had been removed at the end of September for not meeting the minimum daily trading value, and the addition for the first time of Columbia Care (CSE: CCHW) (NEO: CCHW) (OTC: CCHWF).