This is a copy of the June 23rd edition of our weekly Newsletter, which we have been publishing since October 2015.

Almost a year ago, Tilray took off after its successful NASDAQ IPO at $17 per share, achieving gains of 1665% at the $300 peak two months later. Of course, this set off the hunt for “the next Tilray”, and it seems the market thought it found one in Akerna, which our readers probably know better through its wholly-owned MJ Freeway. On June 19th, we published an interview with the CEO and soon after, the stock went parabolic.

While it is exciting to see meteoric rises in cannabis stocks that trade on the NASDAQ, we would argue that the increase in share price in such a short period of time, is bad for the sector and even the companies as well. When stocks run far ahead of the fundamentals that justify them, the traders who successfully exploit the supply and demand imbalance profit, but it leaves many investors holding the bag. We receive a lot of emails from readers, and, with respect to the price action on Akerna this week, we heard this:

“I would like to know what went wrong today with Kern? I bought the stock on Wednesday at 29 a share it closed after hours trading at $ 70. At 9:30 am when the market opened I was so excited I bought a few more shares. Suddenly my gains disappeared and turned into losses. I demand an explanation.”

While we can’t respond to inquiries like this directly, we will do so in this newsletter for the benefit of all of our readers. As we reported on Thursday morning, the float on Akerna was even less than it appeared, which was very low in any event. Over 3/4 of investors in the MTech Acquistion SPAC that acquired MJ Freeway redeemed their shares (but kept their warrants). With so many investors chasing so few shares, the stock, which had languished for over a year near the IPO price of $10, surged to a high of $72.65 on Thursday morning after closing at $10.50 last Friday. The fully-diluted share-count of about 10.4 million shares implied a peak market cap of $755 million for a company that has generated sales of about $11 million over the past year. The bottom-line is that traders were able to exploit the low supply of shares, but it isn’t sustainable due to the presence of over 5 million warrants in the hands of investors who already voted with their feet about their prospects for MJ Freeway (by redeeming their shares at $10.238).

In addition to pummeling investors, these extreme short-term surges hurt the overall sector, in our view, because they add to the perception that it is overly speculative. But, worse than what these situations do for the overall sector, they can really hurt the companies involved. Take Tilray, for example. It was unable to effectively capitalize on the meteoric stock price. Rather than issue equity, which would have created a lot of value and improved its balance sheet, the company issued convertible debt, which is likely just debt given the very high conversion price. The company was able to use stock to a limited degree to do some acquisitions, but it is likely that the high stock price got in the way of other potential acquisitions.

For Akerna, the stock chart will look very troubling to investors for the foreseeable future. Worse, the company has stated its intention to use its stock for M&A, and we think that the recent jump in its price will likely impede its efforts to do so until the price is more rational. With all of those warrants soon to hit the market, the process could play out quickly.

Although TILT Holdings has debuted initially as a complex story, its revenue is substantial. With $40 Million pro forma revenue in Q1 2019, TILT is defining a new category of cannabis companies. As a vertically-integrated infrastructure and technology platform, TILT is simply the combination of several complementary leading cannabis businesses across North America. With 500+ employees, TILT is a top 5 leading US-focused as company measured by revenue. 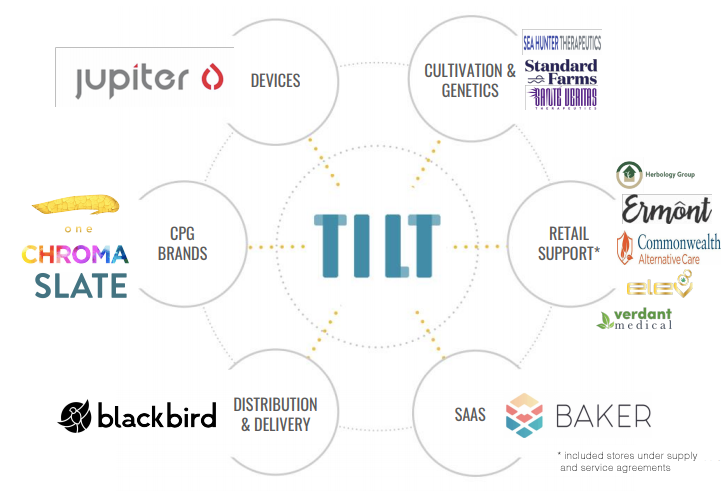 To learn more about TILT Holdings, a client of New Cannabis Ventures, visit the company’s Investor Dashboard that we maintain on its behalf and click the blue Follow Company button in order to stay up to date with their progress.