LEAMINGTON, ON, Oct. 15, 2019 /PRNewswire/ – Aphria Inc. (“Aphria” or the “Company“) (TSX: APHA and NYSE: APHA) today reported its results for the first quarter ended August 31, 2019. All amounts are expressed in thousands of Canadian dollars, unless otherwise noted and except for per gram, kilogram, kilogram equivalents, and per share amounts.

We are pleased to report a second consecutive quarter of profitable growth with strong contribution from our Canadian cannabis operations. Our success was also driven by our international business and the strength and growth of our brands, particularly Broken Coast, despite a small fire at our British Columbia facility at the end of the quarter. This solid start to the year keeps us on track to achieve our fiscal year 2020 financial outlook.

Going forward, we remain focused on our highest-return priorities both in Canada and internationally as our team furthers the development of our medical and adult-use cannabis brands to drive growth through innovation and return value to shareholders. 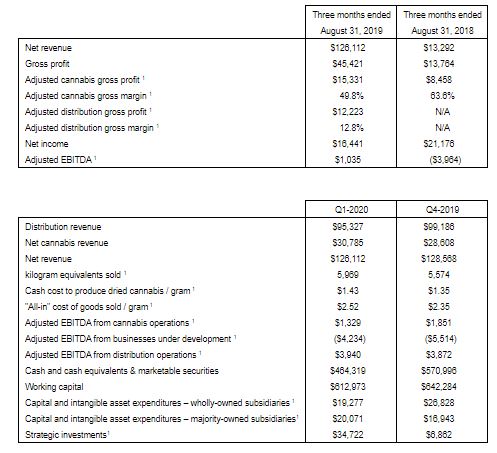 Net revenue for the three months ended August 31, 2019 was $126.1 million, an increase of 849% from $13.3 million in the same period last year. First quarter fiscal 2020 net revenues were lower when compared to the prior quarter net revenues of $128.6 million as a result of a decrease in distribution revenue from $99.2 million to $95.3 million associated with a change in business strategy at CC Pharma to maximize profitability after recent changes in the German government’s medical reimbursement model. The decrease in distribution revenue was partially offset by an increase in net cannabis revenue of $30.8 million from $28.6 million. Net revenue includes over 3,317 kilogram equivalents sold for the adult-use market and 1,354 kilogram equivalents for medical cannabis sales. The Company estimates the impact on revenue from the small fire at Broken Coast to be approximately $1.5 million in the quarter; however, the majority of the lost quarterly revenue will be reported in the Company’s second quarter.

1 – In this press release, reference is made to adjusted cannabis gross profit, adjusted cannabis gross margin, adjusted distribution gross profit, adjusted distribution gross margin, adjusted net loss, adjusted EBITDA from cannabis operations, adjusted EBITDA from businesses under development, adjusted EBITDA from distribution operations, kilogram equivalents sold, cash costs to produce dried cannabis per gram, “all-in” costs to produce dried cannabis per gram and investments in capital and intangible assets – wholly-owned subsidiaries, which are not measures of financial performance under International Financial Reporting Standards (IFRS). These metrics and measures are not recognized measures under IFRS do not have meanings prescribed under IFRS and are as a result unlikely to be comparable to similar measures presented by other companies. These measures are provided as information complimentary to those IFRS measures by providing a further understanding of our operating results from the perspective of management. As such, these measures should not be considered in isolation or in lieu of review of our financial information reported under IFRS. Definitions and reconciliations for all terms above can be found in the Company’s August 31, 2019 Management’s Discussion and Analysis, filed on SEDAR and EDGAR.

For fiscal year 2020, the Company is reaffirming its guidance of:

Aphria Inc. is a leading global cannabis company driven by an unrelenting commitment to our people, the planet, product quality and innovation. Headquartered in Leamington, Ontario – the greenhouse capital of Canada – Aphria Inc. has been setting the standard for the low-cost production of high-quality cannabis at scale, grown in the most natural conditions possible. Focusing on untapped opportunities and backed by the latest technologies, Aphria Inc. is committed to bringing breakthrough innovation to the global cannabis market. The Company’s portfolio of brands is grounded in expertly-researched consumer insights designed to meet the needs of every consumer segment. Rooted in our founders’ multi-generational expertise in commercial agriculture, Aphria Inc. drives sustainable long-term shareholder value through a diversified approach to innovation, strategic partnerships and global expansion, with a presence in more than 10 countries across 5 continents. 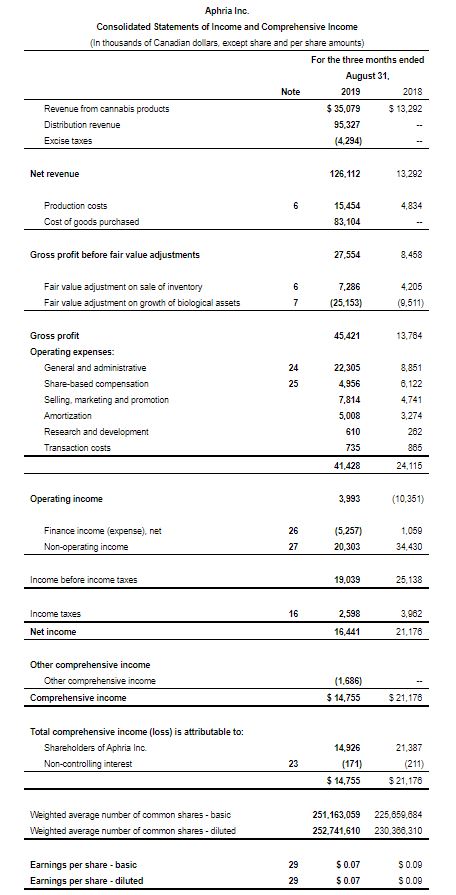 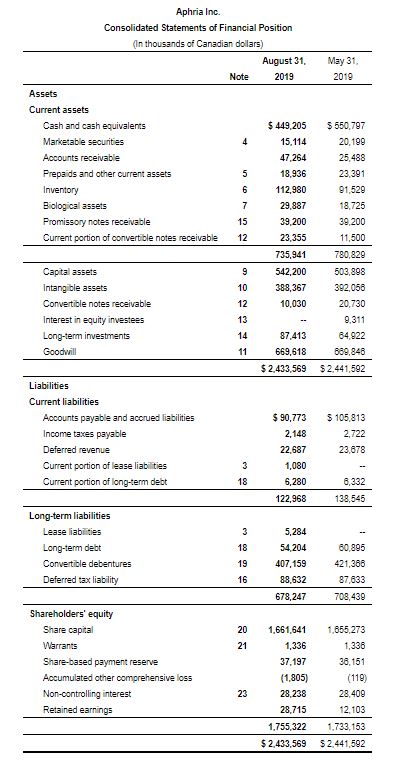 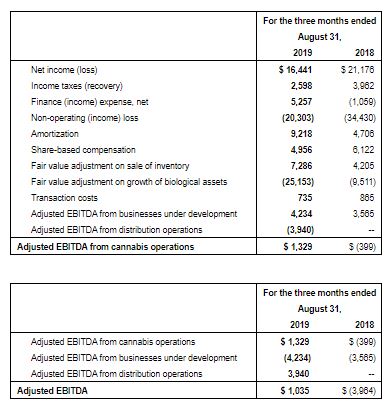