Aphria Inc. Announces Third Consecutive Quarter of Positive Adjusted EBITDA and a 46% Increase in Adult-Use Cannabis Revenue From Prior Quarter

LEAMINGTON, ON, Jan. 14, 2020 /PRNewswire/ – Aphria Inc. (“Aphria” or the “Company”) (TSX: APHA and NYSE: APHA) today reported its results for the second quarter ended November 30, 2019. All amounts are expressed in thousands of Canadian dollars, unless otherwise noted and except for per gram, kilogram, kilogram equivalents, and per share amounts. The Company also announced that Irwin D. Simon, will officially remove “interim” from his title, effective today. In addition to his responsibilities as Aphria’s Chairman of the Board, Mr. Simon had been serving as Interim Chief Executive Officer since February 2019.

We are very pleased with our strong growth and execution in Canada demonstrated by our increase in adult-use cannabis revenue and positive adjusted EBITDA as a result of our compelling brands and market positioning. We are continuing to expand our capabilities internationally with solid progress during the quarter in Germany and South America and look to monetize non-core assets. We are confident in our market position and our ability to generate sustainable profit growth.

I am honoured to continue to work closely with our tremendous team around the world to fuel growth and value for all of our stakeholders. Going forward, we believe our brands, cultivation expertise, cash position and balance sheet will continue to differentiate us in the cannabis industry, and we remain focused on the highest return opportunities for growth. 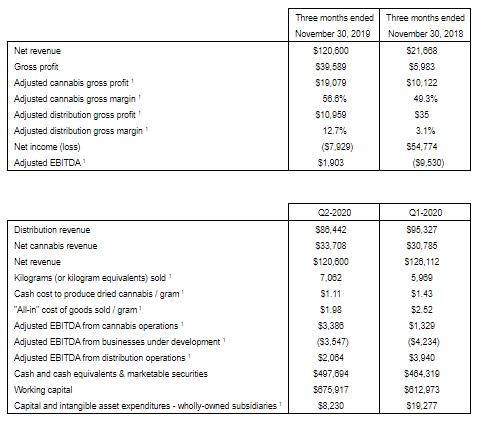 Net revenue for the three months ended November 30, 2019 was $120.6 million, an increase of 457% from $21.7 million in the same period last year. Second quarter fiscal 2020 net revenues were lower when compared to the prior quarter net revenues of $126.1 million as a result of a decrease in distribution revenue from $95.3 million to $86.4 million associated with the change in the German government’s medical reimbursement model and seasonality in CC Pharma. The decrease in distribution revenue was partially offset by an increase in net cannabis revenue of $33.7 million from $30.8 million. Net revenue includes over 5,567 kilogram equivalents sold for the adult-use market and 1,237 kilogram equivalents for medical cannabis sales.

The average retail selling price of medical cannabis (exclusive of wholesale), before excise tax, increased to $8.16 per gram in the quarter, compared to $7.56 in the prior quarter, primarily related to a higher percentage of total medical sales coming from Broken Coast in the prior quarter. The average selling price of adult-use cannabis, before excise tax, decreased to $5.22 per gram in the quarter, compared to $6.02 per gram in the prior quarter, primarily as a result of a change in sales mix. Customer demand exceeded the Company’s supply capabilities in the second quarter as a result of the timing of Aphria Diamond’s license receipt and as a short-term measure the Company purchased wholesale product from other Licensed Producers to supplement its near-term supply capabilities. Wholesale product purchases resulted in a higher cost and less margin opportunity for those sales.

1 – In this press release, reference is made to adjusted cannabis gross profit, adjusted cannabis gross margin, adjusted distribution gross profit, adjusted distribution gross margin, adjusted EBITDA, net loss, adjusted EBITDA from cannabis operations, adjusted EBITDA from businesses under development, adjusted EBITDA from distribution operations, kilogram equivalents sold, cash costs to produce dried cannabis per gram, “all-in” costs to produce dried cannabis per gram and investments in capital and intangible assets – wholly-owned subsidiaries, which are not measures of financial performance under International Financial Reporting Standards (IFRS). These metrics and measures are not recognized measures under IFRS do not have meanings prescribed under IFRS and are as a result unlikely to be comparable to similar measures presented by other companies. These measures are provided as information complimentary to those IFRS measures by providing a further understanding of our operating results from the perspective of management. As such, these measures should not be considered in isolation or in lieu of review of our financial information reported under IFRS. Definitions and reconciliations for all terms above can be found in the Company’s November 30, 2019 Management’s Discussion and Analysis, filed on SEDAR and EDGAR.

Carl Merton, Aphria’s Chief Financial Officer commented, “We are updating our annual outlook with a little over four months left in our fiscal year to reflect certain market dynamics that have evolved relative to our initial expectations. We look forward to generating an acceleration in our revenue and profit growth in the second half of the fiscal year and continue to believe the Canadian and international cannabis industry outlook remains robust. Aphria is well positioned for long-term sustainable growth as we continue to manage the controllable aspects of our business.”

For fiscal year 2020, the Company is updating its guidance to primarily reflect certain market dynamics including a slower than expected retail location rollout in Ontario with more than 40 store openings still pending, the temporary banning of vape products in the Province of Alberta while it studies the impact of vape products, the higher costs of third-party supply as a result of the timing of the receipt of Aphria Diamond’s license, and a slowing in CC Pharma’s growth arising from recent changes in the German government’s medical reimbursement model. The Company expects the following for fiscal year 2020:

Aphria Inc. is a leading global cannabis company driven by an unrelenting commitment to our people, the planet, product quality and innovation. Headquartered in Leamington, Ontario – the greenhouse capital of Canada – Aphria Inc. has been setting the standard for the low-cost production of high-quality cannabis at scale, grown in the most natural conditions possible. Focusing on untapped opportunities and backed by the latest technologies, Aphria Inc. is committed to bringing breakthrough innovation to the global cannabis market. The Company’s portfolio of brands is grounded in expertly-researched consumer insights designed to meet the needs of every consumer segment. Rooted in our founders’ multi-generational expertise in commercial agriculture, Aphria Inc. drives sustainable long-term shareholder value through a diversified approach to innovation, strategic partnerships and global expansion. 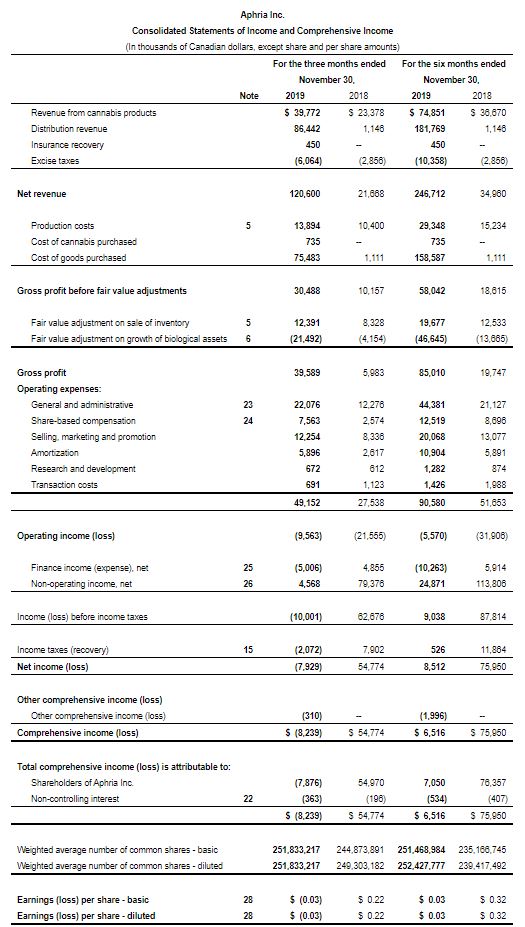 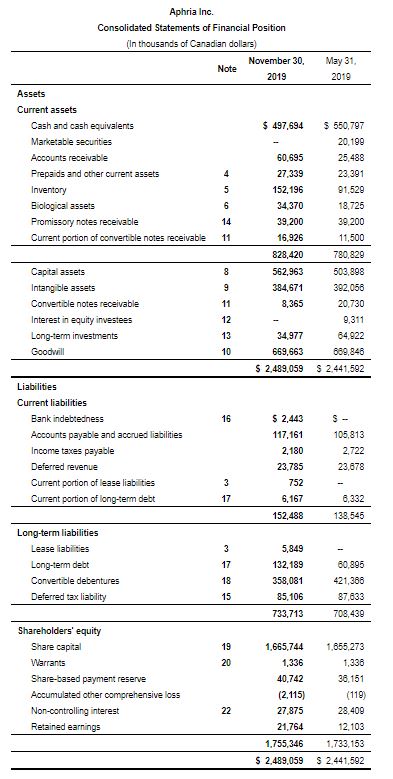 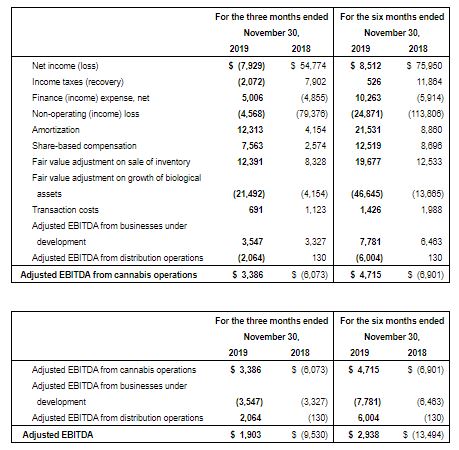