LEAMINGTON, ON, Aug. 1, 2019 /PRNewswire/ – Aphria Inc. (“Aphria” or the “Company”) (TSX: APHA and NYSE: APHA) today reported its results for the fourth quarter and fiscal year ended May 31, 2019. All amounts are expressed in thousands of Canadian dollars, unless otherwise noted and except for per gram, kilogram, kilogram equivalents, and per share amounts.

It’s a new day at Aphria. Our team’s solid execution across key areas of our business resulted in strong adult-use revenue growth and a profitable fourth quarter. Over the last six months, our organization identified immediate priorities to help generate substantial progress near-term and long-term. We built upon existing business fundamentals and capabilities, streamlined processes, strengthened governance, and focused on building brand awareness.

Together, we have nurtured an entrepreneurial culture of accountability through data-driven decision-making for value creation in the global medical and adult-use cannabis industry. Today’s Aphria has a stronger foundation for long-term growth and success. 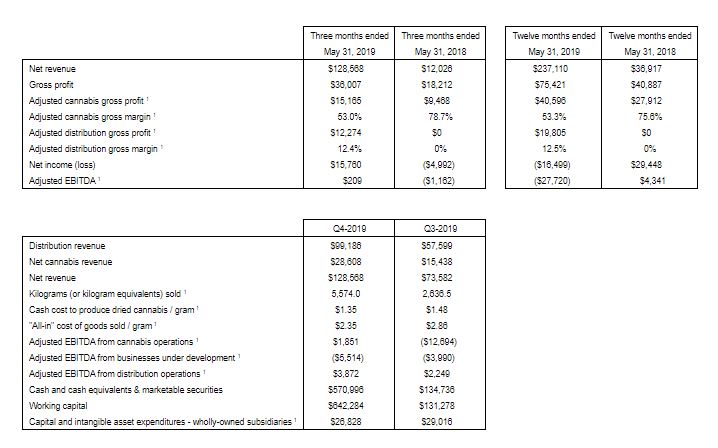 Net revenue for the three months ended May 31, 2019 was $128.6 million, compared to $73.6 million in the prior quarter and $12.0 million in the same period last year. Higher revenue in the quarter was driven by $99.2 million of distribution revenue from CC Pharma and other distribution companies and $33.5 million of revenue from cannabis produced. Net revenue includes over 3,228 kilogram equivalents sold for the adult-use market and 1,417 kilogram equivalents for medical cannabis sales.

¹ – In this press release, reference is made to adjusted cannabis gross profit, adjusted cannabis gross margin, adjusted distribution gross profit, adjusted distribution gross margin, adjusted net loss, adjusted EBITDA from cannabis operations, adjusted EBITDA from businesses under development, adjusted EBITDA from distribution operations, kilogram (or kilogram equivalents) sold, cash costs to produce dried cannabis per gram, “all-in” costs to produce dried cannabis per gram and investments in capital and intangible assets – wholly-owned subsidiaries, which are not measures of financial performance under International Financial Reporting Standards (IFRS). These metrics and measures are not recognized measures under IFRS do not have meanings prescribed under IFRS and are as a result unlikely to be comparable to similar measures presented by other companies. These measures are provided as information complimentary to those IFRS measures by providing a further understanding of our operating results from the perspective of management. As such, these measures should not be considered in isolation or in lieu of review of our financial information reported under IFRS. Definitions and reconciliations for all terms above can be found in the Company’s May 31, 2019 Management’s Discussion and Analysis, filed on SEDAR and EDGAR.

For fiscal year 2020, the Company expects:

Aphria Inc. is a leading global cannabis company driven by an unrelenting commitment to our people, the planet, product quality and innovation. Headquartered in Leamington, Ontario – the greenhouse capital of Canada – Aphria Inc. has been a leader in low-cost production of high-quality cannabis at scale, grown in natural conditions. Focusing on untapped opportunities and backed by the latest technologies, Aphria Inc. is committed to bringing breakthrough innovation to the global cannabis market. The Company’s portfolio of brands is grounded in expertly-researched consumer insights designed to meet the needs of every consumer segment. Aphria Inc. drives sustainable long-term shareholder value through a diversified approach to innovation, strategic partnerships and global expansion, with a presence in more than 10 countries across 5 continents. 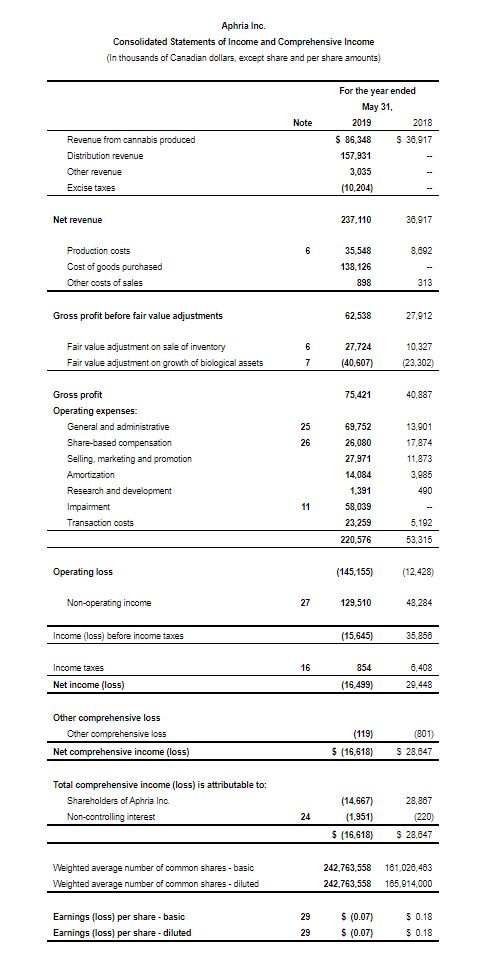 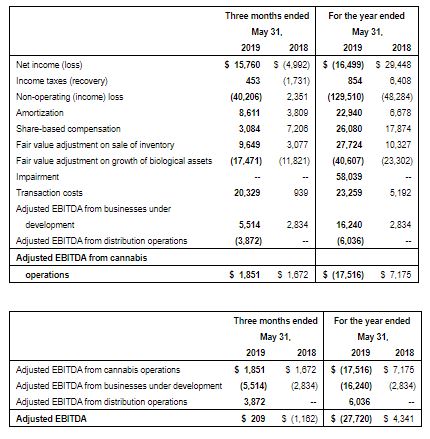