Aurora Cannabis (TSXV: ACB) (OTC: ACBFF) announced today that it accelerated the exercise of 5.77mm warrants, most of which were exercisable at $0.66, associated with a capital raise that closed in December and January. Because the stock closed above $1.25 for ten consecutive days, the warrants must be exercised by November 11th, well in advance of the original expiration date in 2018. Assuming the warrants are exercised, the company would realize proceeds of almost $3.8mm.

This warrant conversion and significant cash injection further strengthens Aurora’s balance sheet and increases our working capital position. The Company has ample capital to continue executing on our business strategies without the need to raise additional funds for operating activities. 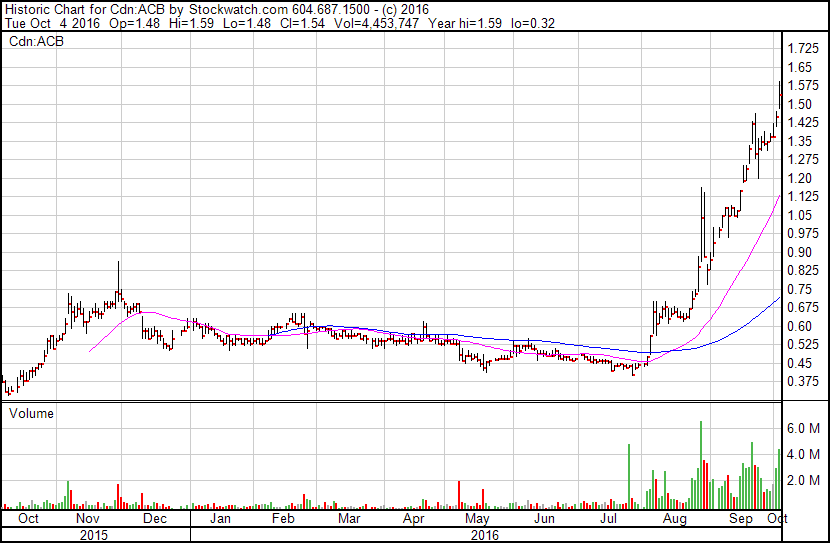 Update as of 3:37 ET: The company announced the move to the TSXV shortly after we published that news based upon the CSE announcement.

Aurora’s move from the CSE to the TSX-V follows a year of significant achievements for the Company. These include receipt of its license from Health Canada to sell dried cannabis, commencement of commercial operations, brisk market penetration and sales growth, multiple financings, and the announcement of a material expansion plan. Aurora has been one of the most actively traded stocks on the CSE over the past two months, providing significant liquidity and enhanced value for its investors and positioning the Company extremely well to remain a market leader on the TSX-V.

“Listing on the TSX-V is an important milestone in our development, reflecting the remarkably rapid operational and commercial progress Aurora has made this year,” said Terry Booth, CEO of Aurora. “Visibility of the Company has increased significantly as a result of our recent financings, our industry leading patient registration rate, our strategic acquisition of CanvasRx, and the announcement of our plans to expand production capacity to more than 70,000 kg per year.”

“We believe that trading on the TSX-V will enable us to engage and satisfy an even wider investor audience,” added Mr. Booth. “Aurora continues to set new standards in the industry, and we are focused strongly on further building shareholder value.  We will continue the disciplined execution of our business strategy to solidify and expand our leadership position in the cannabis sector. We look forward to reporting on our progress as a more visible member of the community of listed companies.”