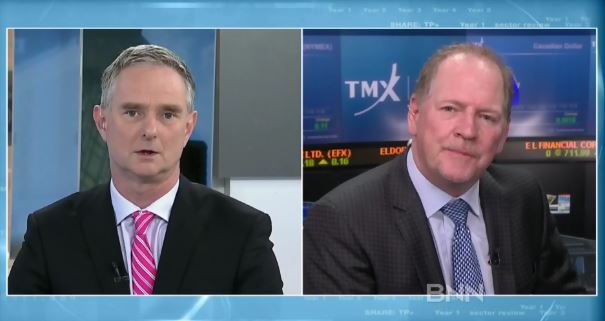 Aurora Cannabis (TSXV: ACB) (OTC: ACBFF) CEO Terry Booth was interviewed Friday by Andrew Bell of BNN, who began with a question about the company’s financials.  Booth stated that the company will be very close to breakeven in its second quarter of Fiscal 2017, which ends in December.

The company is in the process of building a 800K sq. ft. greenhouse that is currently being assembled in Holland. Their current indoor production facility benefits from a low cost of electricity (1.5 cents per kilowatt-hour). Booth believes that the industry will need to invest more than $1 billion in order to build adequate capacity for fully legal cannabis over the next 18 months, as the recreational market will be more than 5 times the size of the medical cannabis market. Aurora expects that each province will handle retail distribution differently, with a role for pharmacies and dispensaries.

Booth stated that the current M&A environment in the Canadian cannabis sector has resulted in rich valuations, though the company expects to play a role in consolidation. He noted that Aurora’s investor base has become more institutional following recent capital raises.