The new facility will be largely similar to Aurora`s flagship facility, Aurora Sky, with a projected production capacity in excess of 120,000 kg per annum. Construction will be phased, with cultivation commencing upon completion of the first 200,000 square feet, which is anticipated in the third quarter of calendar 2018. The new facility, upon completion, would establish Aurora Nordic as the continent`s largest producer of cannabis. Furthermore, through Aurora`s wholly owned subsidiary, Pedanios GmbH, Aurora Nordic will have access to Europe`s largest distributor of cannabis, providing direct access to a large and rapidly growing customer base.

Through APS, Aurora Nordic has access to existing greenhouse space it could utilize for cultivation as of the summer of 2018 if the company so chooses.

Under the terms of the agreement, and upon the achievement of certain milestones by the JV, the companies intend to fund construction of the Aurora Nordic facility through a combination of conventional, non-dilutive project finance, and direct investment by Aurora and APS on a pro-rata basis.

Aurora Nordic will focus on the cultivation and sales of cannabis in Denmark, Sweden, Norway, Finland and Iceland, through Aurora’s wholly-owned subsidiary Pedanios GmbH. As capacity from the Aurora Nordic facility expands, excess capacity will be distributed to other EU countries with the support of Pedanios.

This is a huge next step for Aurora, establishing us as the leading cannabis company in Europe, a market of well over 400 million people, dramatically accelerating our international expansion. We are already the leading exporter to and distributor of medical cannabis in Germany, and now have the largest funded capacity footprint in the rapidly-growing European market, in which only a handful of licensed cannabis companies are currently able to operate.

Mr. Booth added, “The relationship between APS and Larssen, who identified this opportunity for us, goes back many years through the joint development of a number of large-scale projects. This provides Aurora Nordic with a major advantage in terms of time to market and overall execution. We will be able to utilize the operational capacity of one of the largest greenhouse vegetable growers in Europe (APS), in addition to Aurora’s deep store of cannabis sector expertise, from growing to distribution. Furthermore, Mads Pedersen, APS’s CEO, is a highly respected entrepreneur in the Nordic countries, and we will be able to leverage his strong industry and financial sector network to execute on Aurora Nordic’s development and growth on favourable terms. We are very excited about this new venture, and look forward to be working closely with the APS team on establishing Aurora Nordic as the dominant cannabis company in the European market.”

We are delighted to partner with the world`s most dynamic cannabis company, with its exceptional execution track record. Aurora shares our high-technology, high-quality and ultra-low cost production philosophy. That, in addition to the clear strategic vision of Terry Booth, made Aurora our partner of choice to develop the full potential of our cannabis license and build Europe’s leading cannabis company. 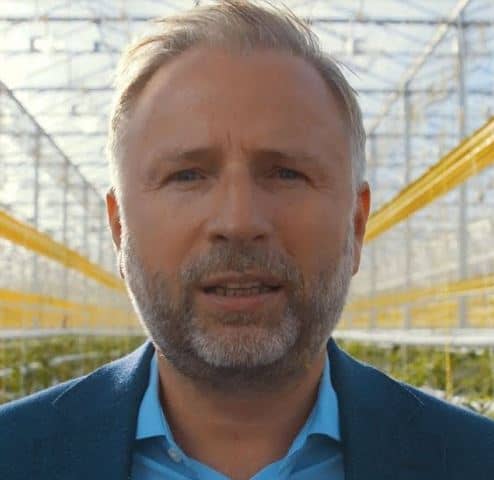 Aurora’s joint venture partner APS is one of Europe’s largest greenhouse producers of tomatoes and other vegetables, and is known for achieving excellent yields per square foot. APS, which operates 3,000,000 square foot of greenhouse production space, currently ships up to 100,000 kg of greenhouse vegetable produce per day, requiring high levels of automation and a sophisticated logistical infrastructure. APS CEO Mads Pedersen was awarded, by PWC the accolade of “Business Owner of the Year” for 2017 in Denmark. Mr. Pedersen and his team will bring to Aurora Nordic important operational capacity, as well as a strong local network of suppliers, finance and logistics partners.

In addition, the Company holds approximately 17.23% of the issued shares in leading extraction technology company Radient Technologies Inc., based in Edmonton, and is in the process of completing an investment in Edmonton-based Hempco Food and Fiber for an ownership stake of up to 50.1%. Furthermore, Aurora is the cornerstone investor with a 22.9% stake in Cann Group Limited, the first Australian company licensed to conduct research on and cultivate medical cannabis. Aurora also owns Pedanios, a leading wholesale importer, exporter, and distributor of medical cannabis in the European Union, based in Germany. The Company offers further differentiation through its acquisition of BC Northern Lights Ltd. and Urban Cultivator Inc., industry leaders, respectively, in the production and sale of proprietary systems for the safe, efficient and high-yield indoor cultivation of cannabis, and in state-of-the-art indoor gardening appliances for the cultivation of organic microgreens, vegetables and herbs in home and professional kitchens. Aurora’s common shares trade on the TSX under the symbol “ACB”.

Alfred Pedersen & Søn is the largest tomato and sweet pepper grower in Scandinavia, with a total of 2.8 million square feet (26 hectares) cultivation space under glass. APS is the largest producer in Scandinavia of both conventional and organic tomatoes, and the leading grower of pepper and cucumber, all produced in state of art greenhouses. The company is widely-recognized for consistently being at the forefront of innovation.