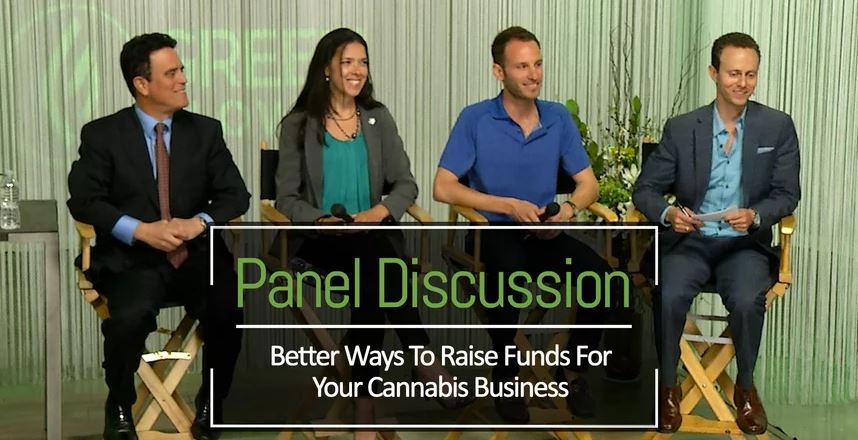 I was honored to participate on a panel at Green Flower Media’s “Cannabis Entrepreneur Summit” in May, a live event that was seen by over 10,000 viewers on the web over the course of two days. GFM is a leading cannabis-focused media company with a mission to educate about cannabis.  CES was the second event hosted by GFM, preceded by the “Cannabis Health Summit” earlier this year.

My panel, “Better Ways to Raise Funds for Your Cannabis Business,” was moderated by GFM’s CEO, Max Simon, and and also included Holly Alberti of Healthy Headie, a direct-to-consumer distribution and education platform, and Joel Milton of Baker Technologies, a software company.  My involvement with 420 Investor and New Cannabis Ventures has allowed me to see many aspects of capital raising, while Alberti and Baker have both raised capital successfully in their ancillary businesses.

Alberti went through the CanopyBoulder accelerator program and had success in pitching at ArcView. Using simple analogies allowed her to quickly explain her business model to potential investors. Holly suggests that raising capital in the cannabis industry is more challenging than other industries. One time-saving tip she offered is to qualify potential investors by inquiring about their history of investing in the cannabis industry.

Milton participated in the 500 Startups accelerator program.  He suggested using convertible notes, sticking to standard documentation and keeping the business model simple. He also cautioned against being overly optimistic about capital raising based on feedback from potential investors or going after the wrong types of investors. He should know, as he spoke individually to 184 investors for his last capital raise. Milton was able to raise about 2/3 of the total raised from institutional investors, but most institutional investors won’t participate in funding the cannabis industry yet. One tip that he offered is to bring in strategic investors at a lower price than other investors.

I pointed to the public markets being not quite ready for mainstream investing and actually serving as a barrier to successful capital raising.  I cautioned both investors and entrepreneurs to take a longer-term view.  Canada appears to offer a better investing environment than in the U.S. due to federal illegality. I pointed to the risk of raising too little capital and suggested using convertible notes or warrants to bring in future capital as milestones are met.

You can purchase audio and video recordings of the entire event, which featured 18 speakers and 4 panels, for $197. For a limited time, you can save $50 by using the code “GFM50” and start building or scaling up your cannabis business today.