After a strong start to the year, with the Canadian Cannabis LP Index rising 17.7% in January, the benchmark reversed out the gains in February, declining 18.6% to leave it down 4.1% year-to-date. 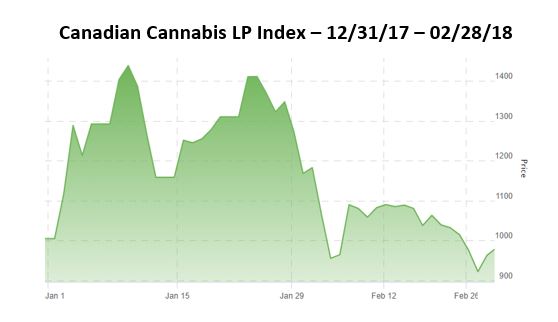 Tier 1, which includes the LPs that are generating sales of at least C$4 million per quarter, fell 10.7%. This group includes Aphria (TSX: APH) (OTC: APHQF), Aurora Cannabis (TSX: ACB) (OTC: ACBFF), CanniMed Therapeutics (TSX: CMED) (OTC: CMMDF), CannTrust (CSE: TRST) (OTC: CNTTF), Canopy Growth (TSX: WEED) (OTC: TWMJF) and MedReleaf (TSX: LEAF) (OTC: MEDFF). Within the group, CanniMed performed the best, rising 1.5% as it moved closer to being acquired by Aurora Cannabis. Aphria was the weakest performer, declining 25.1% in a month that it disclosed the acquisition of Nuuvera and began to divest its U.S. holdings. Additionally, after winning the first supply agreement with Shopper’s Drug Mart, it saw Aurora Cannabis, and Tilray achieve the same in February, joining MedReleaf, which announced its deal in December.

Tier 2, which includes the remaining LPs that are generating sales, produced the lowest returns, declining 21.2%. Cronos Group (TSXV: MJN) (NASDAQ: CRON) bucked the trend after rallying sharply following the announcement Monday that it would be uplisting to the NASDAQ, the first LP to do so and gaining 31.0% during February. The rest of this segment produced some of the worst performers, with seven companies falling by more than 28%.

Tier 3, which includes the LPs that are licensed to cultivate but not yet approved to sell, fell 18.9%, with all but TerrAscend (CSE: TER) (OTC: TRSSF) declining.

The pressure on the market coincided with weakness in the broader stock market early in the month but also a slight delay in the implementation of Canada’s adult-use program. The rally in January, which extended on gains in the back half of 2017, was fueled in part by the launch of the first U.S.-listed ETF, The ETFMG Alternative Harvest ETF (NYSE: MJ) and led to over C$1.1 billion in equity and convertible note offerings from 14 different LPs.

The returns for the sector varied greatly, with three stocks generating positive returns while four fell in excess of 30%: 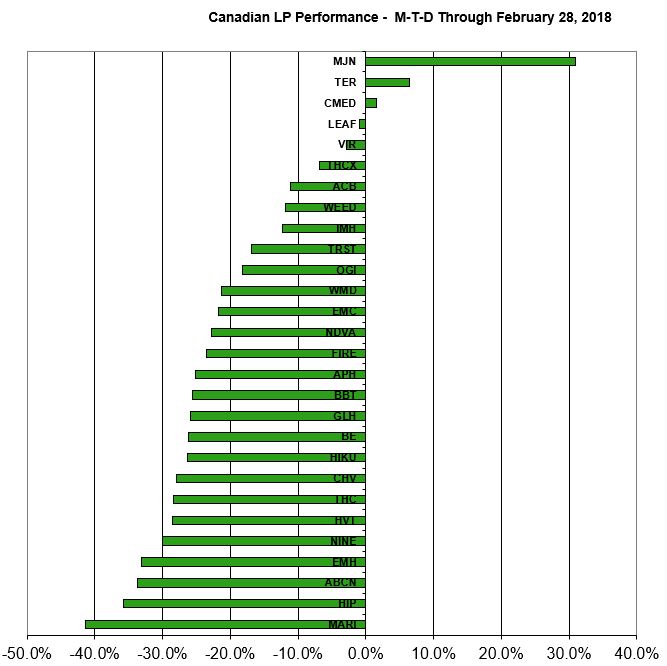