The Public Cannabis Company Revenue & Income Tracker, managed by New Cannabis Ventures, ranks the top revenue producing cannabis stocks that generate industry sales of more than US$10 million per quarter (C$13.2 million). This data-driven, fact-based tracker will continually update based on new financial filings so that readers can stay up to date. Companies must file with the SEC or SEDAR and be current to be considered for inclusion. Please note that we raised the minimum quarterly revenue several times as the industry has scaled up, including from US$7.5 million in June 2020, from US$5.0 million in October 2019 and from US$2.5 million in May 2019.

35 companies currently qualify for inclusion, with 21 filing in U.S. dollars and 14 in the Canadian currency, which is up from the 34 when we reported at the end of July. In the U.S., we added cbdMD (NYSE American: YCBD). In Canada, we added MediPharm Labs (TSX: LABS) (OTC: MEDIF) and removed Aleafia Health (TSX: ALEF) (OTCD: ALEAF). Some companies have taken advantage of revised filing deadlines that have been extended due to the pandemic, and we expect to continue to see some delays. We also expect to add a few names to the rankings over the balance of this reporting season and the rest of the year. 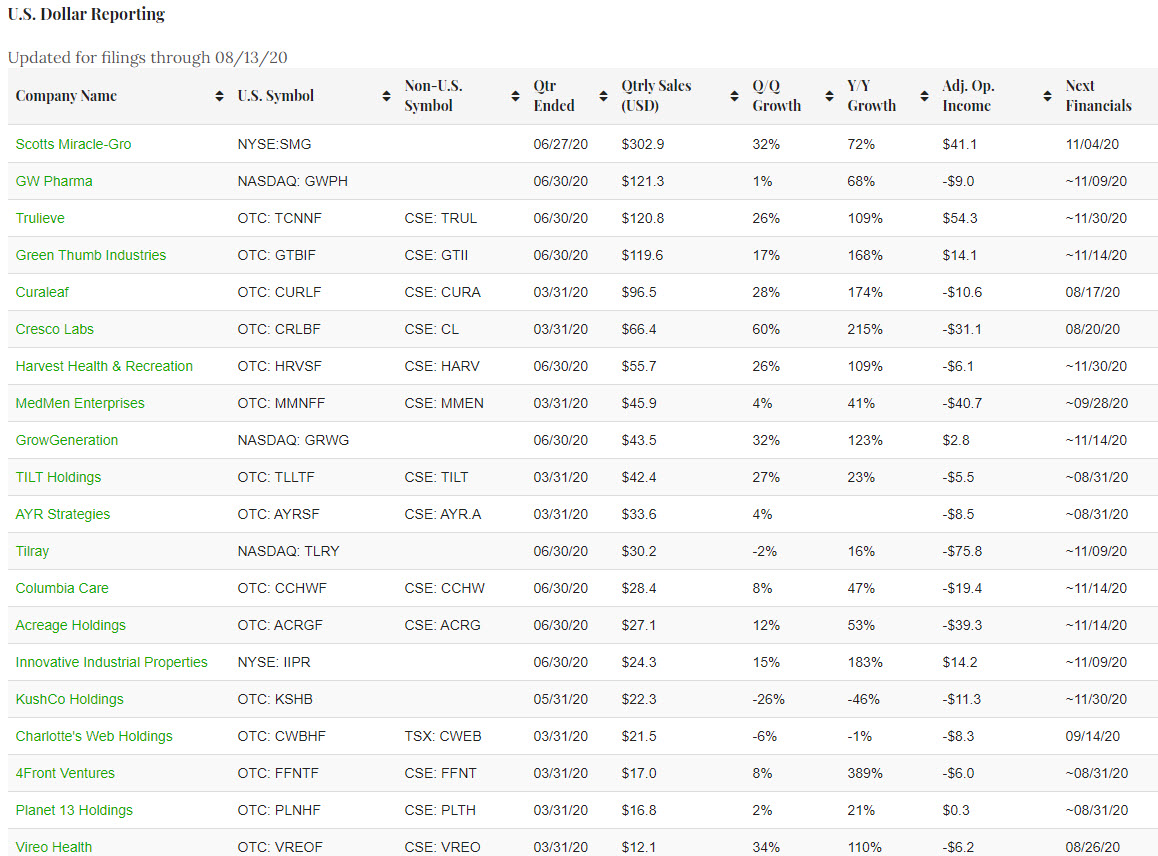 During the second half of August, we will get several more updates, including from two of the largest MSOs, beginning with Curaleaf (CSE: CURA) (OTC: CURLF) on the 17th. According to Sentieo, analysts expect revenue to be $109 million, up 14% sequentially and 124% from a year ago. Q2 will be the first to include a full quarter of contribution from the Select acquisition earlier this year but will exclude revenue from the recently acquired Grassroots Cannabis. In Q1, the company reported a pro forma revenue of $147 million that is intended to depict the revenue generation of the company with all pending and closed acquisitions as well as gross up revenue from managed services, and it guided for Q2 pro forma revenue to $165 million, which would be up 12% from Q1.

Cresco Labs (CSE: CL) (OTC: CRLBF), which reports on the 20th, is expected to see Q2 revenue increase 14% from Q1 to $76 million, which would represent 154% growth from a year ago. The company acquired Origin House early in Q1, which helped boost revenue during the quarter, and it also reported strong contributions from Illinois and Pennsylvania.

For those interested in more information about companies reporting, we publish comprehensive earnings previews and reviews for subscribers at 420 Investor on many of these companies, including for Focus List names Cresco Labs and Curaleaf.

Of the companies that report in Canadian dollars, Canopy Growth (TSX: WEED) (NYSE: CGC) maintained its leadership position as it surpassed analyst expectations by reporting revenue of C$110 million, up 2% sequentially and 22% from a year ago. It also improved its adjusted operating loss to -C$172 million. The company’s growth was supported by sequential growth in its ancillary businesses. Sundial saw a large gain in cannabis revenue as it decreased its operating loss by 40% to a still quite-large C$21.6 million. MediPharm Labs rejoined the list after growing revenue by 26% sequentially, though this represented a 56% decline from a year ago. 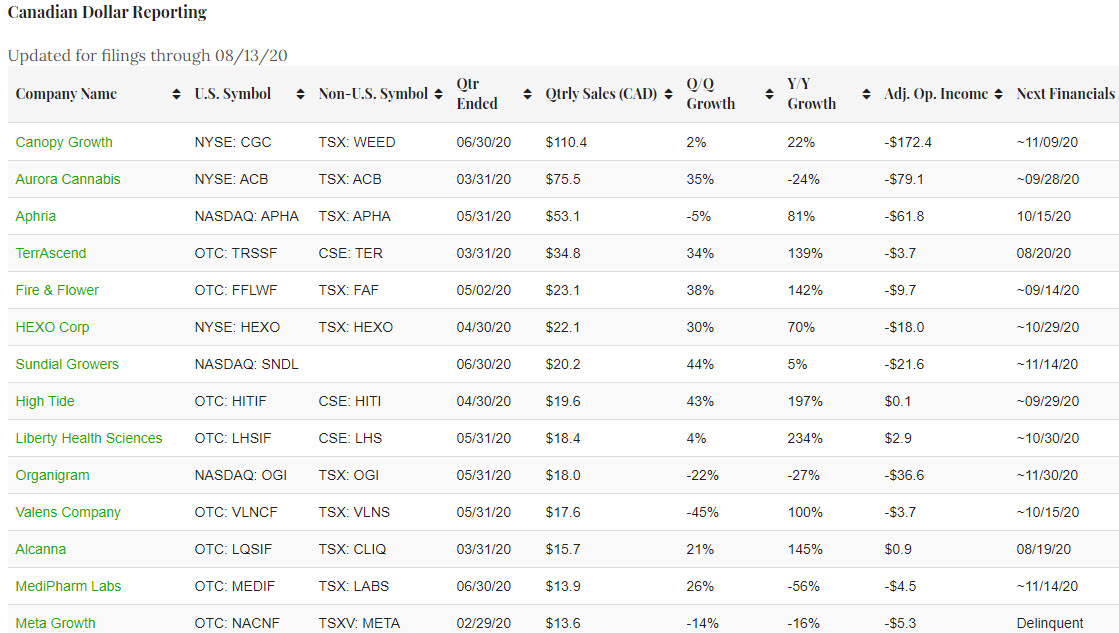 During the second half of August, Alcanna (TSX: CLIQ) (OTC: LQSIF) and TerrAscend (CSE: TER) (OTC: TRSSF) will report their Q2 financials. Alcanna generates predominantly non-cannabis revenue through its liquor-store operations. According to Sentieo, it is expected to increase 26% from a year ago to C$253 million. TerrAscend recently pre-announced its Q2 ahead of guidance it had provided in May. The company had previously projected revenue of C$45 million, with gross margin and adjusted EBITDA expected to improve sequentially. It will report revenue of C$47.2 million, up 36% from Q1 and 169% from a year ago, and adjusted EBITDA of C$11.4 million, up approximately 128% from Q1. 90% of the company’s revenue is generated from its American operations.

For those interested in more information about companies reporting, we publish comprehensive earnings previews and reviews for subscribers at 420 Investor, including for Focus List members Alcanna and TerrAscend.