The Horizons Marijuana Life Sciences Index ETF (TSX: HMMJ) (OTC: HMLSF) has ballooned in size as the Canadian licensed producers (LPs) have soared, with the ETF net assets now at C$327.7MM as of 12/7. Its quarterly rebalancing is likely to occur within the next week, and this will lead to the sale of a portion of its three largest holdings, Aphria (TSX: APH) (OTC: APHQF), Aurora Cannabis (TSX: ACB) (OTC: ACBFF) and Canopy Growth (TSX: WEED) (OTC: TWMJF), all of which exceed the 10% maximum position size at the time of rebalancing.

Given the size of the ETF, this means that it will be selling $14.6mm of Aurora Cannabis, $10mm of Aphria and $6mm of Canopy Growth in the coming days, with the proceeds distributed into smaller members of its portfolio.

Based on the criteria outlined in Chapter 4, the Index Calculator determines the securities that are eligible for inclusion in the index. These securities are filtered according to the criteria below, resulting in the final index selection:

The index, which caps exposure to any single name at the time of rebalancing to 10% “with the excess weight being redistributed proportionally among all index components with a weight of less than 10%”, is set to be rebalanced on December 15th.

The ETF has made some changes since we last updated it, disposing of Arena Pharmaceuticals (NASDAQ: ARNA) and adding CannTrust (CSE: TRST) (OTC: CNNTF), Delta 9 Cannabis (CSE: NINE) (OTC: VNRDF), Newstrike Resources (TSXV: HIP) (OTC: NWKRF) and Radient Technologies (TSXV: RDI) (OTC: RDDTF). The  additions to Delta 9 and Newstrike were made on 12/7. 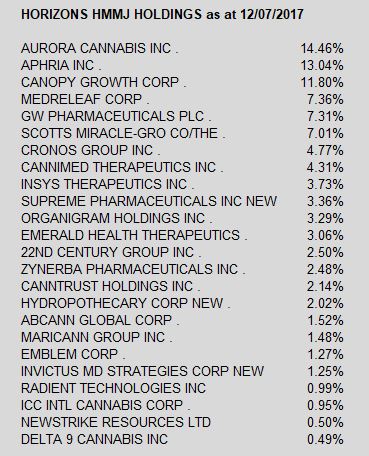 HMMJ has increased 44% since we wrote about the last rebalancing in September, but it has dramatically underperformed the six largest Canadian LPs: 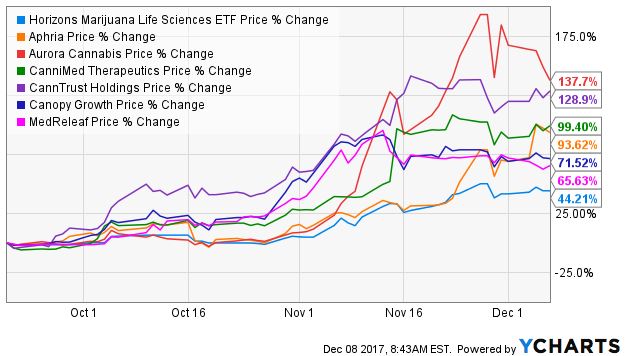