In the third quarter, we set new records for total sales and grams sold demonstrating the strength of our underlying business while we continue to make investments in preparation for the recreational market and for international expansion. These investments are starting to bear fruit and we now have boots on the ground in six different countries working on various initiatives – both for cultivation and export. 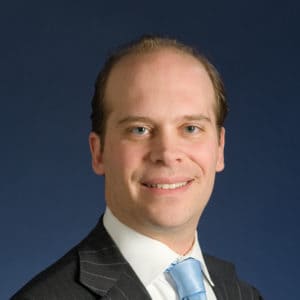 We also launched our first adult recreational-use brand, San Rafael ’71, which is getting good reception from the various Provincial purchase authorities. With a strong balance sheet bolstered by $192.5 million in equity capital raised since last December, we have a clear opportunity to establish MedReleaf as a global leader in the cannabis industry. 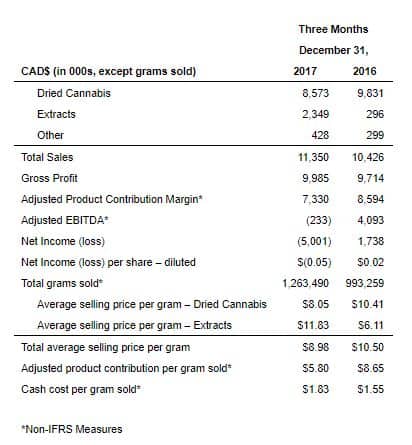 Subsequent to the Third Quarter Fiscal 2018

Extract sales for the third quarter were $2.3 million, an increase of $2.1 million from the prior year period, and represented 21% of total sales. With the launch of topical creams, softgel capsules, future product development initiatives, and growing industry demand, MedReleaf expects sales of extract products to account for an increasing percentage of the Company’s overall revenue in the future.

Total average selling price for the third quarter of fiscal 2018 was $8.98 per gram compared to $10.50 for the prior year period. The reduction in average selling price per gram from the prior year period is a result of discounts offered to qualifying Veterans due to the VAC Policy change that provides for a maximum reimbursement rate of $8.50 per gram effective November 22, 2016. 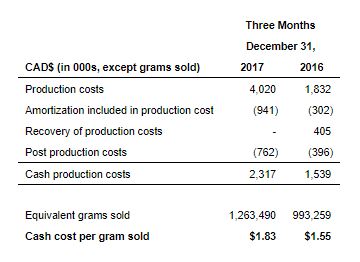 The following are the Company’s cash production costs, on a total and per gram sold basis, for the three and months ended December 31, 2017 and 2016, as compared to reported production costs (excluding costs resulting from the fair value of biological assets), which represents cost of sales, in accordance with IFRS:

The following is the Company’s Adjusted Product Contribution Margin as compared to the reported gross profit, which includes the gain on changes in fair value of biological assets in accordance with IFRS, for the three months ended December 31, 2017 and 2016. 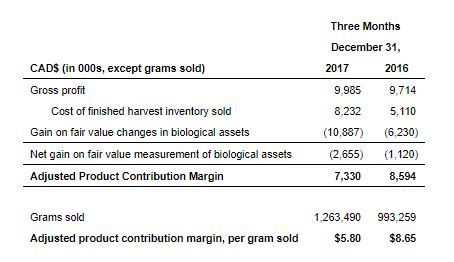 Adjusted Product Contribution Margin for the third quarter of fiscal 2018 was $7.3 million or $5.50 per gram sold, compared to $8.6 million or $8.65 per gram sold for the prior year period. 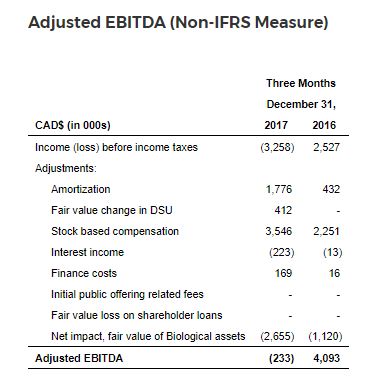 The decrease in Adjusted EBITDA for the third quarter of fiscal 2018 compared to the prior year period is the result of: overhead costs incurred to support the Bradford Facility; increased expenditures related to professional fees; business development; increased patient support costs to support patient demand; investments in sales, marketing and brand development; increased human resource talent to support current and future growth; and as a result of the VAC Policy, the Company offering discounts to qualifying Veterans to assist with the non-reimbursable portion of their medication.

Net loss for the third quarter of fiscal 2018 was $5.0 million compared to net income of $1.7 million for the prior year period. The net income decrease was mainly due to costs incurred related to the Company’s stock based compensation expense, fair value loss related to the Company’s deferred share unit (DSU) plan, increased operating and overhead expenses, and increased advertising and promotional expenses.

Inventories as at December 31, 2017 were $24.9 million, an increase of $15.4 million from March 31, 2017 due primarily to inventory produced at the Bradford Facility. Of the total increase in inventories, $10.7 million was due to changes in the fair value associated with the deemed cost of inventory, the balance was due primarily to the production of work-in-process dried cannabis leaf product produced for future extraction.  As at December 31, 2017, the equivalent of approximately seven months of cost of sales are included in inventory.

Capital expenditures for the nine months ended December 31, 2017 were $29.8 million primarily put towards production rooms, building improvements, furniture and other equipment related to the construction and development of the Bradford facility. As at December 31, 2017, approximately $9.0 million of future payments have been committed in relation to the development of the Bradford Facility.

MedReleaf is fully funded for its announced plans to increase capacity to 35,000 kilograms in production annually. The Company has a fully drawn $10 million term credit facility and an undrawn $10 million revolving credit facility with CIBC. In addition, MedReleaf completed two bought deal equity financings, one on December 4, 2017 and a second on January 31, 2018, for total gross proceeds of approximately $192.5 million. The proceeds from these two equity financings will be used to finance the acquisition and/or construction of additional cannabis production and manufacturing facilities and expand the Company’s marketing and sales initiatives.

A conference call and webcast to discuss MedReleaf’s second quarter fiscal year 2018 results will be held on Tuesday, February 13, 2018 at 8:00 a.m. (ET). The call will be hosted by Neil Closner, Chief Executive Officer, and Igor Gimelshtein, Chief Financial Officer, followed by a question and answer period.

The Conference Call will also be webcast live at http://bit.ly/2DQpYSM

This news release, along with the unaudited condensed interim consolidated financial statements for the three and nine month periods ended December 31, 2017 and 2016, including the notes thereto, and the Company’s corresponding management’s discussion and analysis, are available on the Company’s website at www.medreleaf.com and on SEDAR at www.sedar.com.

(b)  Equivalent grams and kilograms

Voted Top Licensed Producer at the 2017 Lift Canadian Cannabis Awards, MedReleaf is an R&D-driven company dedicated to innovation, operational excellence and the production of top-quality cannabis.  Sourced from around the world and carefully cultivated in one of two state of the art ICH-GMP and ISO 90001 certified facilities in Ontario, the Company delivers a variety of premium products for the global medical market and is committed to serving the therapeutic needs of its medical patients and providing a compelling product assortment for the adult-use recreational consumer.