Green Thumb Industries (CSE: GTII) (OTC: GTBIF) has filed an S-1 with the SEC to enable it, once the registration is effective, to sell ten million shares. The company, which moved to U.S. GAAP accounting earlier this year and began filing with the SEC then, is describing it as its “initial public offering of securities in the United States,” as all of its previous sales have taken place in Canada.

GTI suggested that the capital will be used to increase its capitalization and financial flexibility , allowing it additional working capital and funding capital expenditures. It may also use a portion to fund investments and acquisitions. The company didn’t specify an  underwriter and said that it will sell securities directly to investors.

The move to sell shares follows a recent private placement equity sale by Curaleaf (CSE: CURA) (OTC: CURLF), which announced that it will be filing a shelf-registration to sell additional equity. The company said that it has no plans to sell stock in the near-term and described the pending action on the recent conference call as good financial management. Peers Cresco Labs (CSE: CL) (OTC: CRLBF) and Trulieve (CSE: TRUL) (OTC: TCNNF) previously filed shelf registrations, though neither of them has sold equity since filing them.

The leading MSOs have been able to raise debt capital as well as secure sale-leaseback transactions, and they have moved to generate positive free-cash flow. On its recent conference call, Curaleaf Chairman Boris Jordan suggested that potential borrowing costs have declined significantly over the past few months.  In a research piece provided to subscribers at 420 Investor in May, I suggested that the largest MSOs would look to raise capital when the share prices improved. At the time, there was some risk that the companies could face some risk with near-term debt maturities, but the operating environment has become much more robust. In fact, GTI announced that it extended its debt by a year from 2022 to 2023. Now, raising equity seems to be more about growth capital for in-market expansion, whether through taking advantage of M&A or investing in expansion projects, or potentially pursuing additional markets.

Over the past three months, the stocks of the four largest MSOs have increased sharply but have pulled back this week: 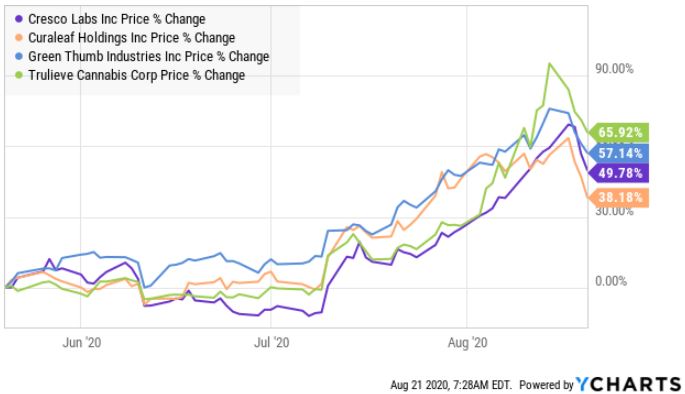