As of November 7, 2018, the Company owned ten properties located in Arizona, Colorado, Maryland, Massachusetts, Michigan, Minnesota, New York and Pennsylvania, totaling approximately 952,000 rentable square feet (including approximately 114,000 rentable square feet under development), which were 100% leased with a weighted-average remaining lease term of approximately 14.7 years. As of November 7, 2018, the Company had invested approximately $121.5 million in the aggregate (excluding transaction costs) and had committed an additional approximately $15.9 million to reimburse certain tenants and sellers for completion of construction and tenant improvements at the Company’s properties. The Company’s average current yield on invested capital is approximately 15.4% for these ten properties, calculated as (a) the sum of the current base rents, supplemental rent (with respect to the lease with PharmaCann LLC at one of the Company’s New York properties) and property management fees (after the expiration of the base rent abatement period for the PharmaCann Massachusetts property), divided by (b) the Company’s aggregate investment in these properties (excluding transaction costs and including aggregate potential development funding and tenant reimbursements of approximately $15.9 million).

On July 12, 2018, the Company acquired a property in Massachusetts for $12.75 million (excluding transaction costs) in a sale-leaseback transaction, and entered into a triple-net lease for the entire property with Holistic for continued operation as a cannabis cultivation and processing facility comprising approximately 55,000 square feet of industrial space.

On August 2, 2018, the Company acquired a property in Michigan under development and expected to comprise approximately 56,000 square feet of industrial space upon completion. The initial purchase price for the property was approximately $5.5 million, and the seller is responsible for completing certain development milestones, for which the seller is expected to be reimbursed approximately $5.3 million (the “Additional Purchase Price”). GPI, the tenant at the property, is also expected to complete tenant improvements for the building, for which the Company has agreed to provide reimbursement of up to $2.2 million (the “TI Allowance”). Assuming full payment for each step of the development, the Company’s total investment in the property will be $13 million. Concurrent with the closing of the purchase, the Company entered into a long-term, triple-net lease agreement with GPI, which intends to use the facility for medical-use cannabis cultivation and processing upon completion of development.

On October 30, 2018, the Company acquired an approximately 58,000 square foot industrial property in Colorado for $11.25 million (excluding transaction costs) and entered into a long-term, triple-net lease with TGS for continued operation as a cannabis cultivation facility.

FFO and AFFO are supplemental non-GAAP financial measures used in the real estate industry to measure and compare the operating performance of real estate companies. A complete reconciliation containing adjustments from GAAP net income / (loss) available to common stockholders to FFO and AFFO and definitions of terms are included at the end of this release. 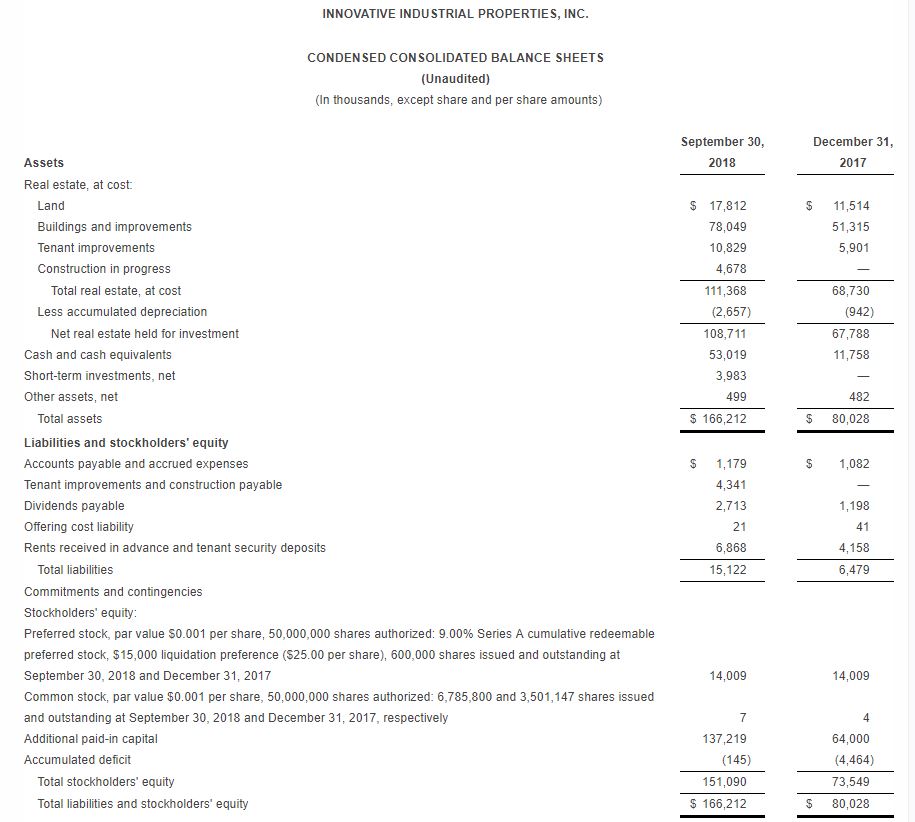 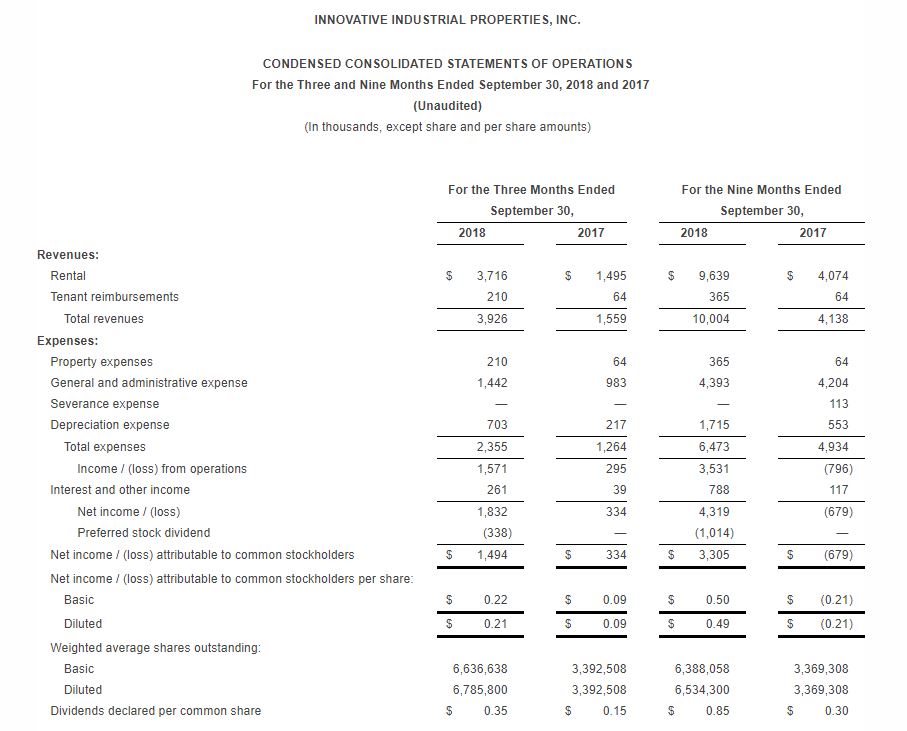 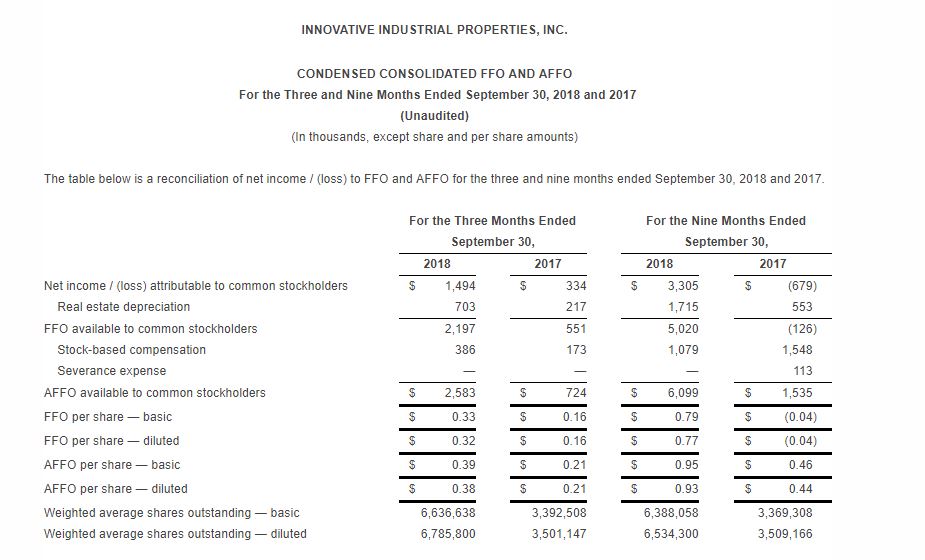 FFO and FFO per share are operating performance measures adopted by the National Association of Real Estate Investment Trusts, Inc. (“NAREIT”). NAREIT defines FFO as the most commonly accepted and reported measure of a REIT’s operating performance equal to “net income (loss), computed in accordance with accounting principles generally accepted in the United States (“GAAP”), excluding gains (or losses) from sales of property, plus depreciation and amortization related to real estate properties, and after adjustments for unconsolidated partnerships and joint ventures.”

Management believes that net income (loss), as defined by GAAP, is the most appropriate earnings measurement. However, management believes FFO and FFO per share to be supplemental measures of a REIT’s performance because they provide an understanding of the operating performance of the Company’s properties without giving effect to certain significant non-cash items, primarily depreciation expense. Historical cost accounting for real estate assets in accordance with GAAP assumes that the value of real estate assets diminishes predictably over time. However, real estate values instead have historically risen or fallen with market conditions. Management believes that by excluding the effect of depreciation, FFO and FFO per share can facilitate comparisons of operating performance between periods. The Company reports FFO and FFO per share because these measures are observed by management to also be the predominant measures used by the REIT industry and by industry analysts to evaluate REITs and because FFO per share is consistently reported, discussed, and compared by research analysts in their notes and publications about REITs. For these reasons, management has deemed it appropriate to disclose and discuss FFO and FFO per share.

Management believes that AFFO and AFFO per share are also appropriate supplemental measures of a REIT’s operating performance. The Company calculates AFFO by adding to FFO certain non-cash and infrequent or unpredictable expenses which may impact comparability, consisting of non-cash stock-based compensation expense and severance expense.