With easy comparisons to a year ago in some cases, growth was generally strong across the markets covered by BDSA in April. Strength in pre-rolls was a major factor. In this review, we will look at the markets one-by-one, beginning with the more mature Western markets and then concluding with the newer Eastern markets.

BDSA provides coverage for Arizona, California, Colorado, Nevada and Oregon. In April, growth ranged from 24% in Oregon to 129% in Nevada compared to a year ago.

Arizona transitioned to adult-use in late January, but this is the first month that BDSA included adult-use sales. Total cannabis sales grew 68% to $124.9 million, with adult-use representing $52.8 million. Medical cannabis sales fell 17% to $72.1 million. Growth was strong across all categories, but the highest growth by far was in pre-rolls, which gained 156%. 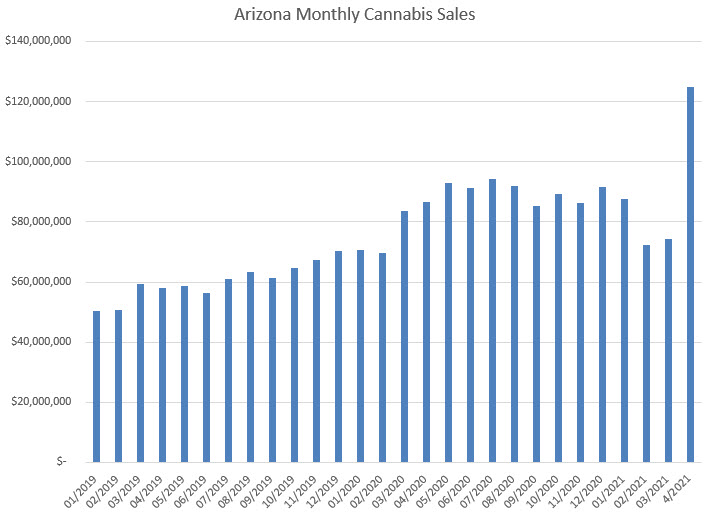 Sales soared 42% in April to $356.8 million, growth that was by far the strongest since the pandemic. It may be slightly overstated due to a dip in April a year ago from March. Flower grew in line with overall sales as did ingestibles, while concentrates were slower at 32% and pre-rolls were much stronger at 93%. The strength in pre-rolls is partially related to the dip a year ago when the pandemic was in its early days. 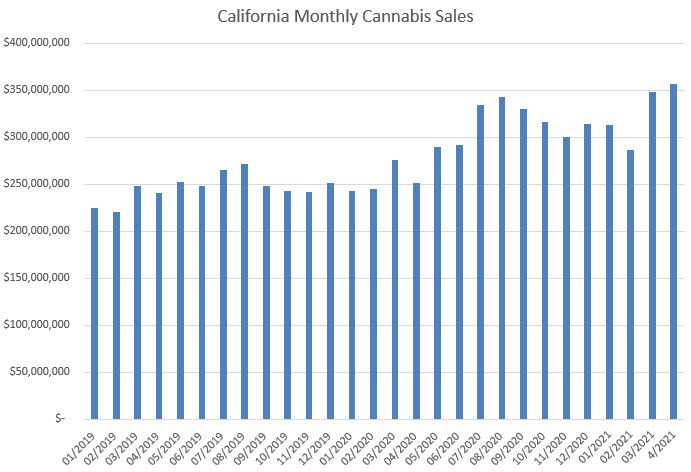 Colorado cannabis sales gained 36%, rising 2% sequentially to $202.8 million. Like the other Western states, pre-rolls led the way, up 72%. Ingestibles were very strong at +62%. Like pre-rolls, this category had declined as the tourists left the state a year ago. Flower grew a solid 21%. 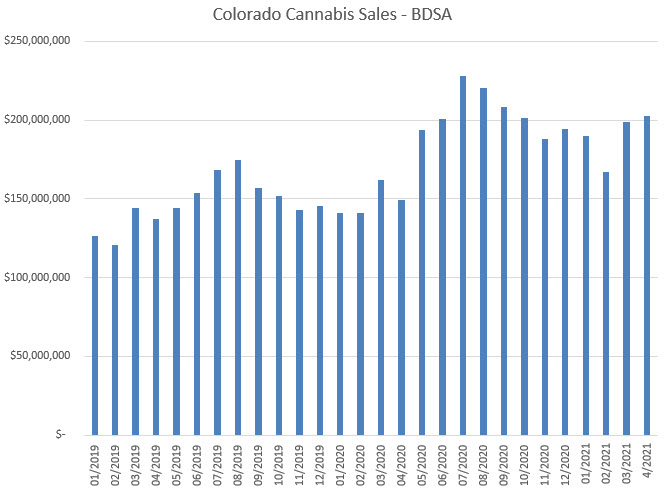 Nevada had a massive decline a year ago as the Strip closed, so the 129% growth to a record $87.8 million needs some context. Pre-rolls were the fastest growing category at 191%. flower grew 133%, concentrates grew 118% and ingestibles grew 110%. 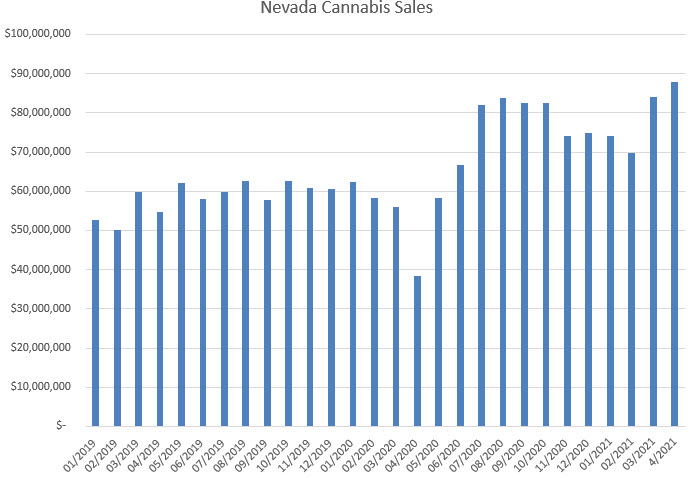 Sales of $110.5 million were a record, but the 24% growth rate was the slowest in more than a year. Pre-rolls rose 53% to lead all categories, while concentrates expanded 30% and flower by 19%. Ingestibles grew less than 12%. 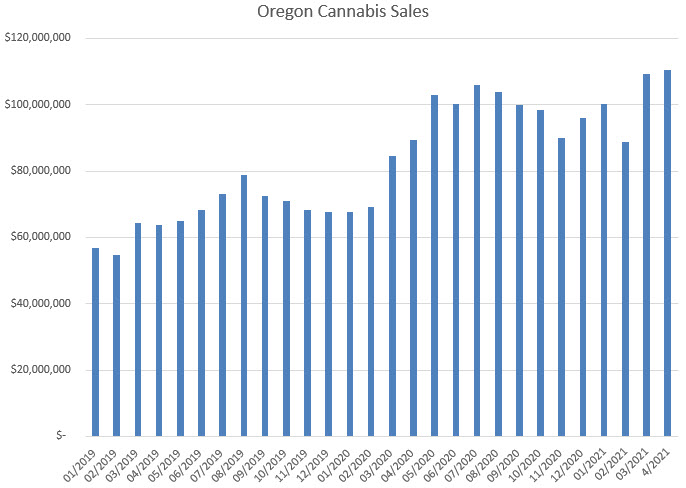 In the newer markets, the annual rate of growth was generally steady except for Massachusetts, which surged due to an easy comparison  based on mandated store closures a year ago. Note that we wrote about April data for Illinois based on the state’s data a month ago. BDSA provides more comprehensive data than the state, breaking sales down by product types. The state hasn’t yet released the medical sales, but May adult-use sales grew 1% sequentially and expanded 163% from a year ago. Note that BDSA has begun providing data for Florida and Michigan as of January. 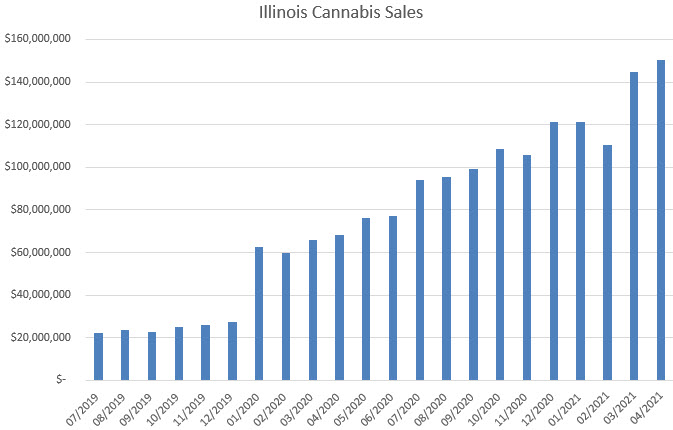 Maryland experienced its slowest growth yet, increasing 41% from a year ago to $47.8 million. This was the one-state where pre-rolls didn’t lead, gaining just 38%. The strongest category was ingestibles, up 57%,  while concentrates expanded by 49%. Flower sales grew 42%. 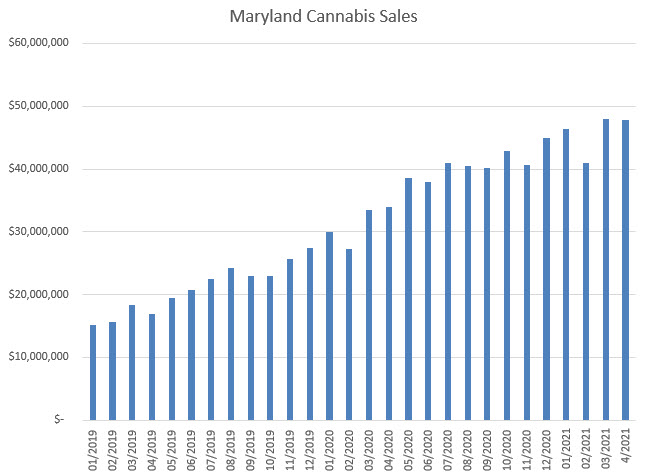 Like Nevada, the growth compared to a year ago needs an explanation. Recall that adult-use sales were curtailed the entire month last year. April set a record at $128.8 million, up 645% from depressed levels a year ago but also up 4% sequentially despite one less day in April than in March. Ingestibles (+810%) and pre-rolls ((+806%) grew the most, while flower (+588%) and concentrates (+589%) were a bit slower. 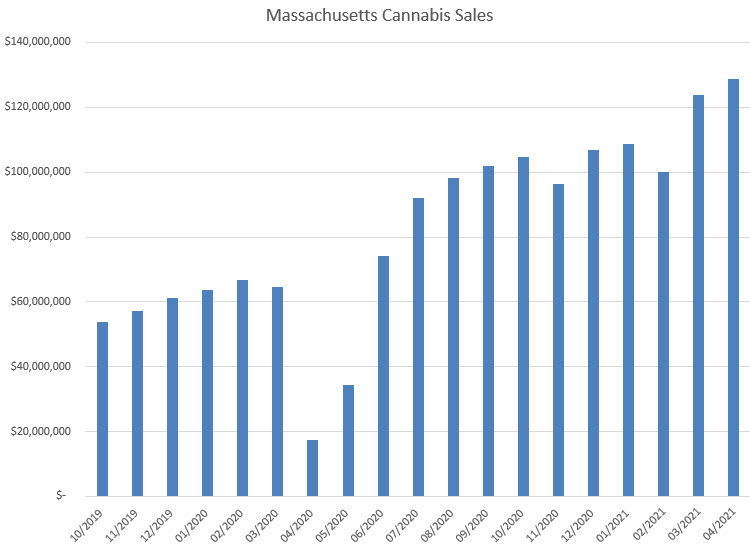