Following a substantial slowing in year-over-year growth across 8 markets that BDSA covers in November, cannabis sales growth had reaccelerated in December and January. During February, according to BDSA, year-over-year growth was slower than in November. February sales fell from January levels in all markets, but the three fewer days accounted for most of the sequential declines across the states. In this review, we will look at the markets one-by-one, beginning with the more mature Western markets and then concluding with the newer Eastern markets.

BDSA provides coverage for Arizona, California, Colorado, Nevada and Oregon. In January, growth ranged from 4% in Arizona to 28% in Oregon compared to a year ago.

Arizona transitioned to adult-use in late January, and BDSA is projecting only medical sales, which fell 17.6% from January to $72.3 million and grew only 4% from a year ago. Annual growth in January had declined to 23.9% from 30.3% in December, which was up from 28.4% in November. Flower sales grew 12%, while pre-roll sales expanded 31%. Concentrates and ingestibles fell from a year ago by 3% and 10%, respectively. 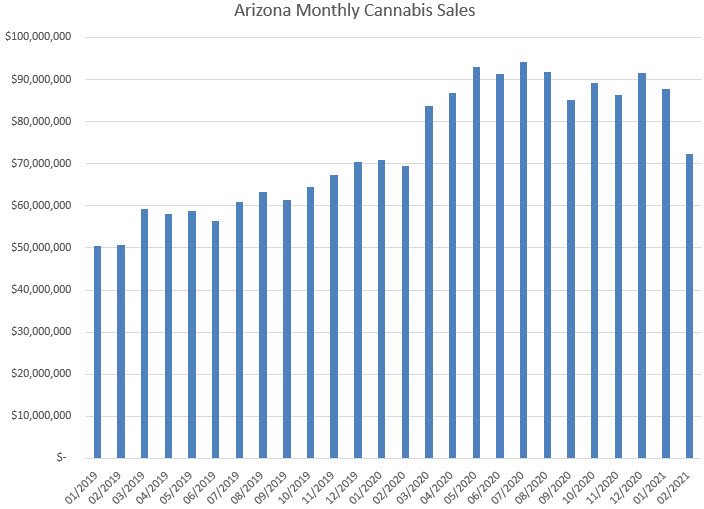 Sales of $287 million fell 8.3% sequentially and expanded 16.9% from a year ago, the slowest rate of growth since June. Over the prior six months, growth had averaged more than 25%.  Despite the slowing this past month, year-over-year growth was more than double the rate a year ago. Flower, which represented 39% of sales, expanded 27.6%, with pre-rolls growing 26.4%. Concentrates (+9.3%) and ingestibles (+7.2%) grew at slower rates than the overall market. 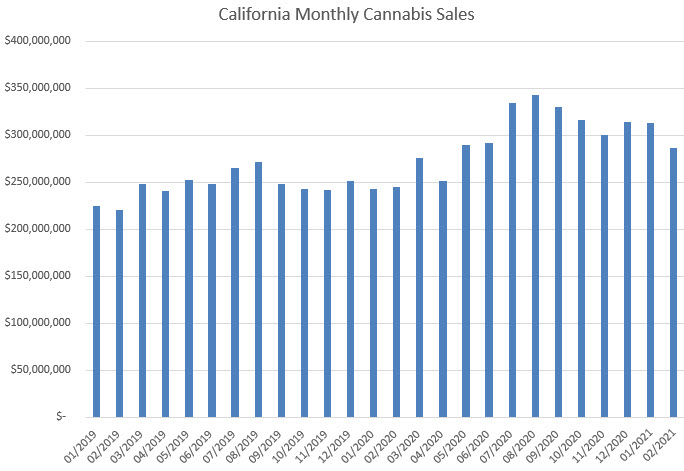 Perhaps impacted by the pandemic, sales of $167.2 million fell 11.9% sequentially as they expanded by 18.4% compared to a year ago.  This was the lowest annual growth since last spring, when the pandemic hit. Since April, year-over-year growth had averaged more than 32%. Flower sales grew 26% during the month, with pre-rolls increasing 21%. Concentrates grew 15%, while ingestibles expanded by 19%. 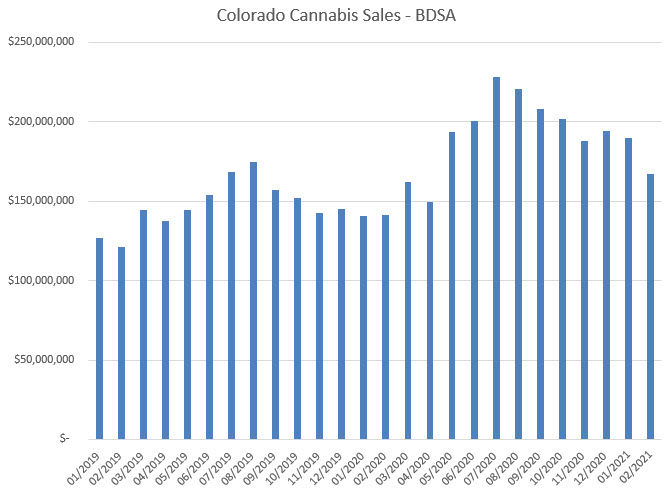 Sales fell 6.1% to $69.7 million, representing annual growth of 19.6%, which was up slightly from January’s 19.1% growth.  Nevada was hit hard in the spring and will face easy comparisons over the next few months. Flower sales continue to drive growth, increasing 38%, while concentrates grew 22%. Reflecting a change in the composition of the customer base away from tourist to locals, pre-rolls have declined almost 16% from a year ago, with ingestibles growing only 1%. 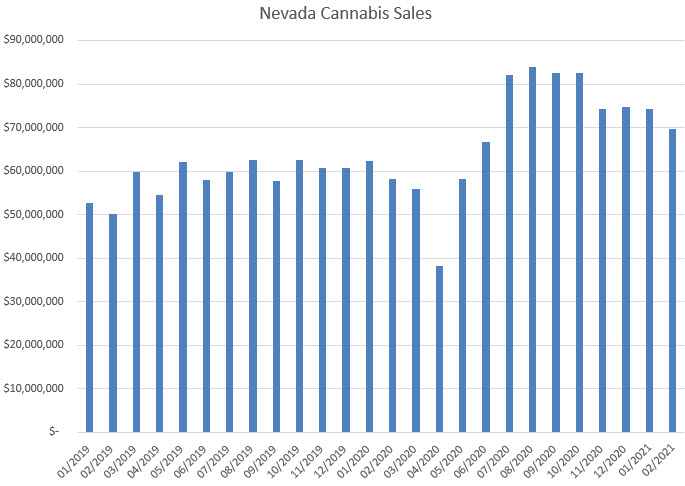 Sales of $88.7 million were down 11.5% from January but up 28% from a year ago. Oregon has been one of the fastest growing markets over the past few quarters, with sales growth over the prior year averaging 40%. The growth in February was slightly higher than the year-over-year growth of 27% last February, which was the lowest growth over the past year. Concentrates grew 33%, just ahead of the 32% growth in sales of flower. Pre-rolls gained 24%, while ingestibles grew 19% compared to a year ago. 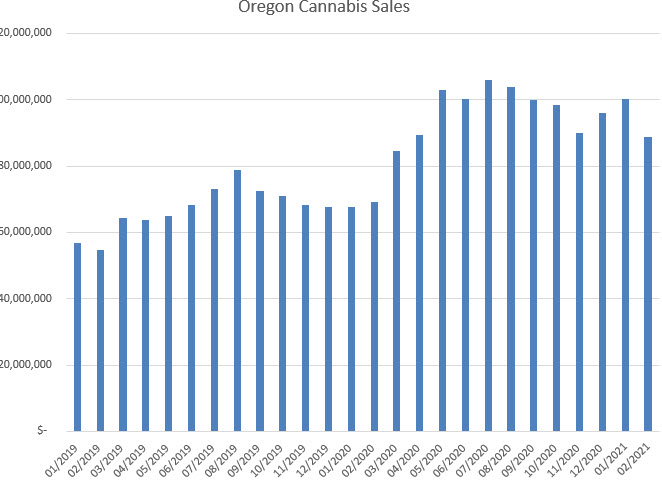 In the newer markets, the rate of growth also lower than in November. In these states, sequential rates can be important to monitor as well, and they increased marginally in each of the states. Note that we wrote about February data for Illinois based on the state’s data a month ago observing that sales were down 9% in February compared to January. BDSA provides more comprehensive data than the state, breaking into product types. The state hasn’t yet released the medical sales, but March adult-use sales grew 35% sequentially and expanded 204% from a year ago. 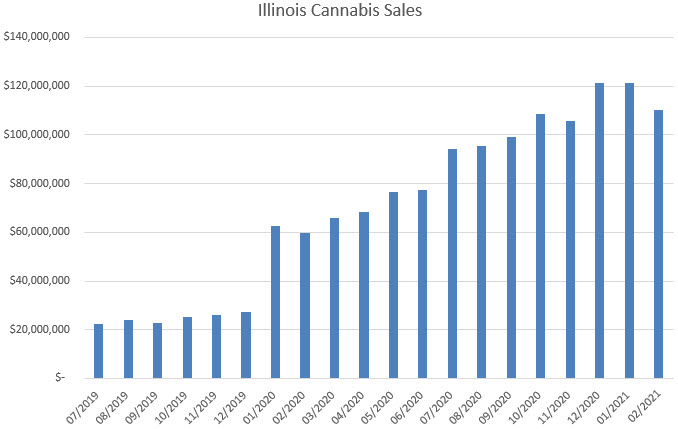 Sales fell 11.9% in February as they grew 49.8% compared to a year ago at $40.9 million. This was the slowest year-over-year growth and represented the second consecutive month below the 59% growth in November. Ingestibles led growth at 70%, with flower gaining 64%. Concentrates expanded 42%, while pre-roll sales increased 18% compared to a year ago. 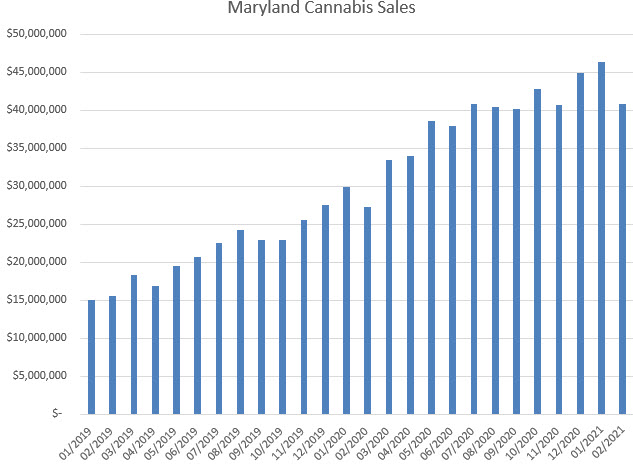 At $100 million, sales fell 8% from January and grew 50% from a year ago. Like Nevada, the comparisons will be a lot easier over the next few months, as the state had curtailed adult-use sales last spring. Similar to Maryland, ingestibles were the fastest growing part of the market, expanding by 69%. Concentrates grew 49%, while flower and pre-rolls, a combined 57% of the market, both grew by 46% compared to a year ago. 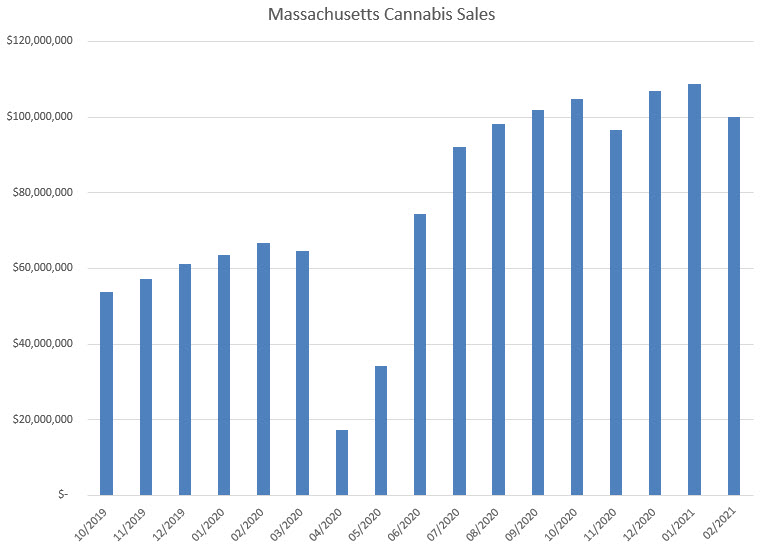 For readers interested in a deeper look at cannabis markets across these eight states and more, including segmentation by additional product categories, brand and item detail, longer history, and segmentation by product attributes, learn how the BDSA BDSA Solutions can provide you with unlimited access to the most accurate and actionable data and analysis.