Cannabis stocks are hot, with trading volumes remaining strong into 2017 after a 88% rise in the Cannabis Stock Index last year, with all of the gains coming after August. Many companies are taking advantage of the enthusiasm among traders, including stock promoters, newsletter writers and the publicly-traded companies as well.

CBIS is one of the first publicly-traded cannabis-related stocks, with a debut in 2009.  In its almost seven years of operations, it has demonstrated little success except in greatly expanding the number of shares outstanding (now over 2.3 billion as of November 7th). Insiders have been heavy sellers of the stock, often after press releases.

As part of my due diligence, I contacted Dana Farber/Harvard Cancer Center to verify that they are indeed a partner with CBIS. The press release stated: “Cannabis Science, Inc. (OTC PINK: CBIS), a U.S. company specializing in the development of cannabinoid-based medications, is proud to announce a collaborative research agreement with Dana Farber/Harvard Cancer Center (DF/HCC).”

Here is the response I received:

First, to aid in the discussion that may follow, I wanted to draw attention to the difference between Dana-Farber Cancer Institute (DFCI), and Dana-Farber/Harvard Cancer Center (DF/HCC). The latter is a consortium made up of 7 different institutions in Boston, one of which being DFCI. With that said, DF/HCC has no such agreement with Cannabis Science Inc., and we have begun the process to request a retraction/correction to this story. Since I only represent DF/HCC, not DFCI, I cannot know if such an agreement exists between DFCI and Cannabis Science, Inc. I hope this answers your question.

Traders and investors should always be cautious with OTC company press releases.  I fact-checked a prior press release from CBIS regarding its arrangement with a dispensary in California and was told that CBIS was not authorized to disclose it as a customer and that CBIS had exaggerated the relationship. CBIS files with the SEC, but it has not filed an 8-K yet regarding this alliance. It’s possible that CBIS incorrectly described its partner. Harvard certainly is the type of institution that can excite penny stock traders. CEO Ray Dabney heavily promoted his recent speech there, issuing three separate press releases about the event:

We asked about this last press release as well in a follow up with Mr. Oakley:

This was also a misprint which I asked to be corrected without success back in November. Dana-Farber/Harvard Cancer Center, being a collection of institutions, has no real location of its own, and from what I gathered by reading the article, it seems like Mr. Dabney must have presented at Harvard Medical School (HMS). While HMS is a DF/HCC member institution, DF/HCC did not arrange this event, and we assume DF/HCC was mentioned in the article out of confusion by the writer.

Traders bid the stock up today on the news, with shares trading as high as $.067 after closing yesterday at $.0598: 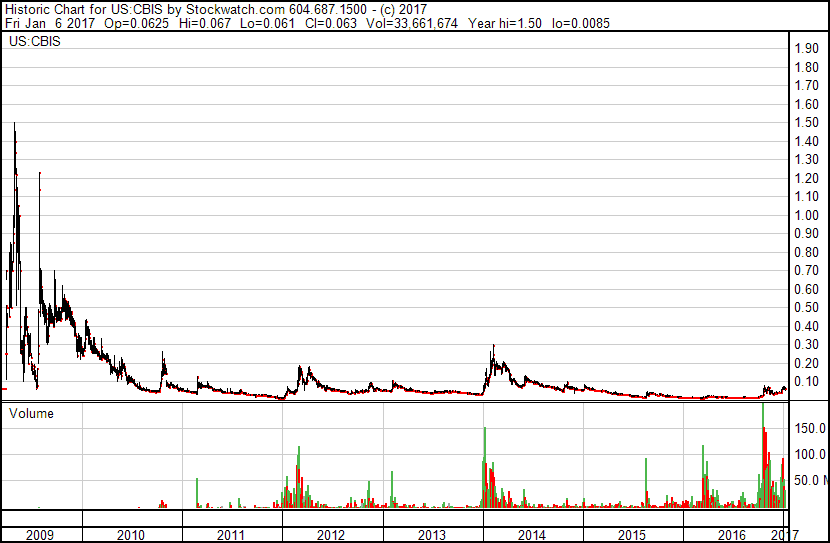 It’s not clear why a prestigious institution would team up with CBIS. According to the 10-Q for the quarter ending 9/30, the company had just $11,000 in cash. Its liabilities of $5.4mm greatly exceed its assets of $1.1mm, and its quarterly sales were just $2733. The company spent over $267K in the first three quarters on investor relations, exceeding the amount it spent on research and development costs. The company has been in business for almost 7 years but doesn’t seem to have demonstrated any success to date. It’s great that an institution like DF/HCC or even DFCI, if that is the correct party, would pursue cannabis research, but it is not clear why they would partner with this company.