Note: On July 20th, the company withdrew its Form 10, and we have subsequently removed it from the list of Public Cannabis Company Revenue Tracker members.

Potnetwork Holdings (OTC: POTN) filed its Form 10 with the SEC on July 13th, a move that qualified the company to be included in the New Cannabis Ventures Public Cannabis Company Revenue Tracker. The company, which reported Q1 sales from CBD products of $6.28 million, plans to rename itself to BioTech Hemp, Inc., continuing a string of name changes. When it first began trading as a cannabis stock in 2014, the company was United Treatment Centers and was positioning itself to be “the premier worldwide news and content provider for the Cannabis industry.” It abandoned the industry, changing its name to SND Auto Group in May 2016 before completing an acquisition in March 2017 that brought it back to the cannabis industry. Here is the complete list of changes over the past 22 years:

While it is positive that the company has finally filed with the SEC after several years of trading as a cannabis penny stock without having met this criterion previously, the information provided in the filing is inadequate and in many ways reflects poorly on the company. Even if one is willing to look beyond some yellow and red flags, the valuation appears to be very difficult to justify.

Potnetwork Holdings acquired First Capital Venture Co. (FCV) in March 2017. It operates FCV as a wholly owned subsidiary, though little details are available about the history of the company, which has a wholly-owned subsidiary, Diamond CBD, a marketer of hemp-derived CBD products under 15 brand names. The company claims that it has a network of over 550 distributors and resellers that “sell to thousands of brick-and-mortar retailers and online merchants.” It also sells on its own website. The company itself reports 13 full-time employees. Its website claims that its products “are legal across all fifty states, USA-made, and produced with federally-legal Cannabidiol (CBD)” and that it works with farms from Kentucky, Colorado and Scandinavia.

The company reports information on FCV only from the time of the acquisition, and  the structure and financial reporting make it very difficult to assess the underlying operations of the subsidiary itself. For example, it’s not possible to assess the inventory of the company, since it doesn’t carry inventory: “This Company has arranged to buy the exact quantity from the suppliers, based on the customer orders and thereby has eliminated the need for holding inventory on hand at any point of time.” Investors can see the cost of goods (40% gross margin in Q1, 35.7% gross margin in 2017), but there is no ability to assess this important factor. Further, the company doesn’t disclose the supplier beyond it’s risk-factor statement that warns “our suppliers may implement significant price increases or may not meet our requirements in a timely fashion, if at all.”  It is quite unorthodox for a retailer to not carry some inventory, and investors are not seeing the entire picture here.

Another area where the company failed to provide adequate information is in its share-count. At the end of Q1, it reported shares outstanding of approximately 596 million, but the share-count as of July 9, 2018 was approximately 465 million, a reduction of 131 million shares. The Form 10 provided no disclosure of any subsequent events at all, nor was there any language in the filing that would explain this rather substantial change.

Hidden and Unexplained Aspects of the Capital Structure

Potnetwork Holdings clearly states that there are 464.9 million shares outstanding as of July 9, 2018, but investors should read the fine print to better understand the potential dilution ahead. The company has 44,227 Class A preferred stock shares as of July 9, 2018, with “each share of Class A preferred stock is convertible into 0.0018% of the total number of outstanding shares of common stock at the time of conversion.” The conversion of these shares to common would not only explode the share-count now, increasing it by 79.6% from 464.9 million to 835 million shares, it could add even more shares over time due to the conversion being based upon the number of shares outstanding at the time of conversion.

While it discloses this source of potential dilution to common shareholders, the company’s Form 10 does a poor job of defining other sources, including warrants and convertible notes. The company has historically relied upon convertible notes and, according to its filing, still has several outstanding.

Historically, there have been many conversions detailed in its OTC filings, but the Form 10 not only fails to disclose the terms of the convertible notes but also doesn’t include that history. One can look back to its annual filing on the OTC from April to learn more, though the disclosure never conveys the price of the conversions:

Investors were left in the dark completely by the Form 10, and the prior filings are inadequate in how they describe convertible debt redemptions totaling 131.8 million shares. Additionally, the Q1 OTC filing suggests that this continued, though the Form 10 made no mention: “On February 27, 2018 the Company issued 25,000,000 common shares to upon the conversion of indebtedness owed. ”

Further, the Form 10 fails to include important details as it describes some capital structure transactions: “In 2017, this Company exchanged $1,200,000 in convertible promissory notes, net of accrued interest, in exchange for a fixed price stock conversion. In the first quarter of 2018, the same was re-negotiated for the issuance of a common stock purchase warrant at a fixed prepaid price.” The Form 10 makes no mention of the amount of warrants outstanding or the terms, including the expiration date and exercise price. These are important details that the company doesn’t convey adequately.

Investors should also be aware of outstanding legal issues with two convertible note lenders that the company suggests could add shares: “Though this Company is likely to win in this case, the Company may end up issuing more shares for this conversion.” There is no range of estimates provided should that be the case.

Without understanding the capital structure, shareholders are likely to be surprised by future dilution. The company needs to better detail the terms for the outstanding convertible notes and warrants. 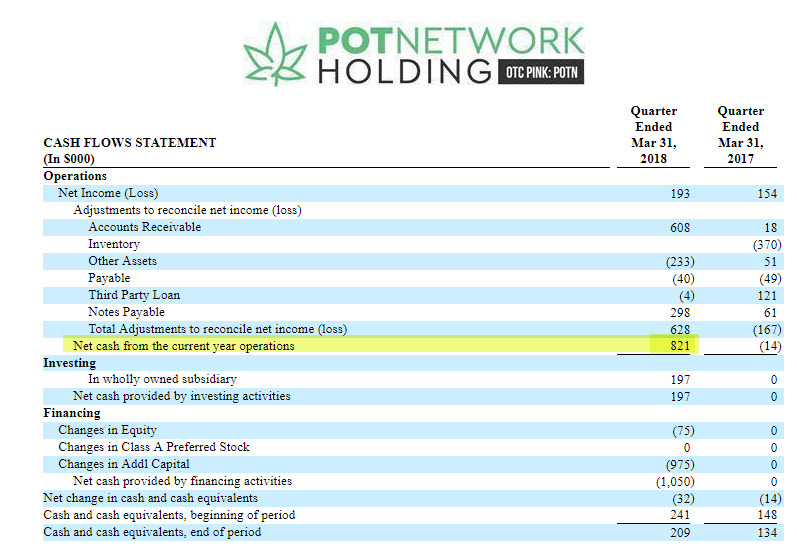 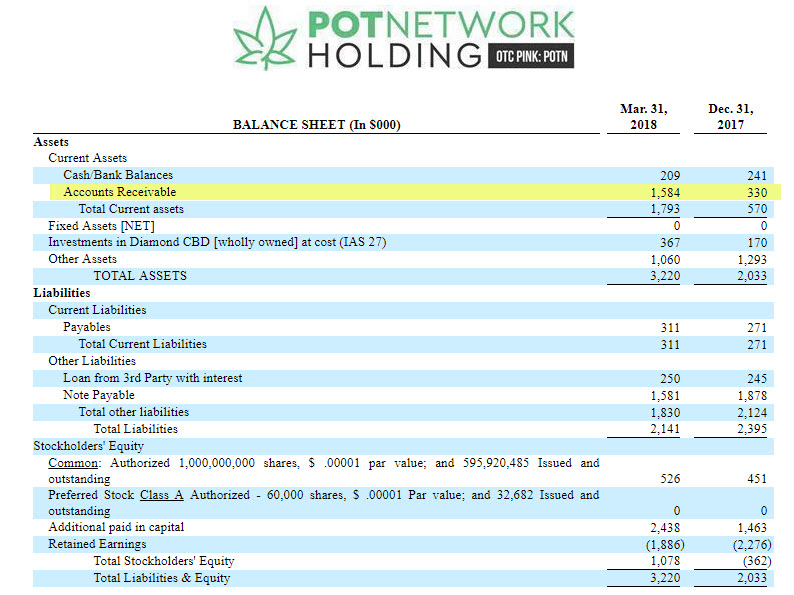 Compounding this error, the amount of the increase in Accounts Receivable was actually $1.254 million, which is more than double the $608K the financial statement suggested (when it used the wrong sign). This is a red flag and suggests that investors can’t rely upon the company’s accounting statements, which were prepared by East West Accounting Services. We conclude based on the filings that cash flow from operations was negative rather than positive as the company suggests.

Another substantial error is that the company has not properly reported its fully-diluted shares when calculating its EPS: 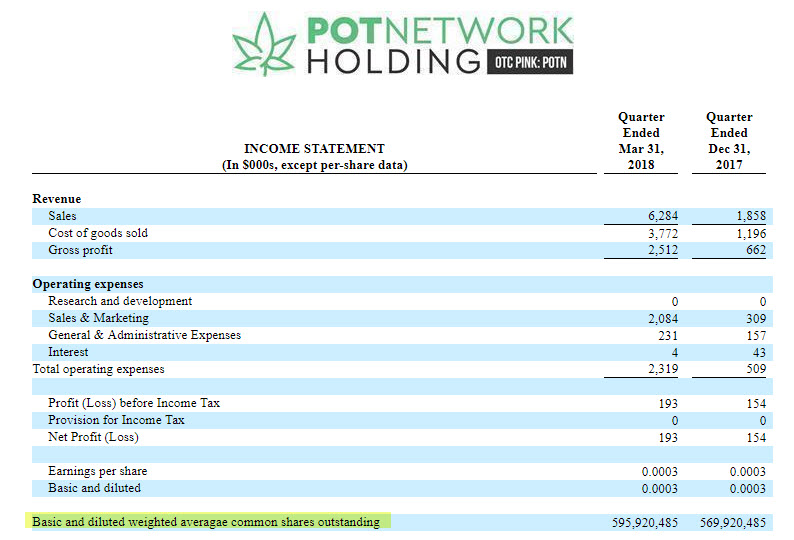 While Potnetwork Holdings reported very strong revenue growth of 238% in Q1, one area where it has failed has been in its ability to drive improvement in the bottom-line. Despite an improved gross margin, increasing from 35.6% to 40.0%, the operating gain of $193K grew only 25.3% as operating expenses soared 355.6%. The company didn’t adequately explain this ballooning expense, which was driven by a 574.4% gain in Sales and Marketing to $2.084 million. The operating margin declined from 8.3% to 3.1%.

Using the shares outstanding and adjusting for the Convertible Preferred, there are 835 million fully-diluted shares, though this excludes potential shares issued from warrants and convertible notes that the company didn’t properly detail. At the closing price of $0.3113 on July 13th, the market cap, then, would be approximately $260 million on a fully-diluted basis. One can use many metrics to evaluate the market cap. Compared to book value as of March 31, 2018, the stock trades at 241X. Compared to trailing 12-month sales of $18.9 million, the stock trades at 13.8X.

There are two really good comparisons that suggest the stock is quite expensive. CV Sciences (OTC: CVSI) has generated sales of $25 million over the past four quarters, producing an 8.3% operating margin in Q1. With a fully-diluted market cap of $221 million, CVSI trades less expensively than POTN, at 8.8X trailing sales. The price to book value metric is also lower at 12.3X. Charlotte’s Web Holdings is in the process of going public in Canada, with an expected IPO range of C$6-7 on 101 million fully-diluted shares. The company, which produced an operating margin of 31.9% in Q1, has generated sales of $46 million over the past year through March 31, 2018. At C$7, which is equivalent to US$5.32, the price-to-trailing sales ratio for this POTN competitor would be 11.7X. Based on a C$6.50 IPO, the company would trade at 7.2X book value.

While Potnetwork Holdings has finally fulfilled its promise to file with the SEC and has reported very strong sales over the past year, the Form 10 filing reveals errors in the financial statements and omits important information that investors should have about the capital structure and the operations of the company. Additionally, the company has expanded its sales and marketing at an inexplicably faster rate of growth than sales, resulting in a declining profit margin. Even overlooking the issues raised, investors would be well advised to consider the company’s publicly-traded peers, which trade at lower valuations.

Disclosure: I have no position in any stock mentioned in this article