Most cannabis investors are familiar with the bull market in Canadian licensed producers (LPs), with 2016 performance of better than 200% gains in each of the publicly-traded companies for the full year. What may not be so well known is that the success of its LPs and its federal legality of medical cannabis has created an environment for companies to raise capital in Canada and deploy it in the United States. While U.S. public cannabis companies trading on the OTC and many private companies continue to struggle to raise capital, several Canadian companies, like The Canadian Bioceuticals Company (CSE: BCC) (OTC: CBICF) and iAnthus Capital Holdings (CSE: IAN) (OTC: ITHUF), are making it look easy.

Another recent example is CannaRoyalty (CSE: CRZ) (OTC: CNNRF), which was formed in late 2014 and began trading publicly on December 8th, opening at $5.00 before ending $3.20. The stock has traded in a relatively tight range subsequently: 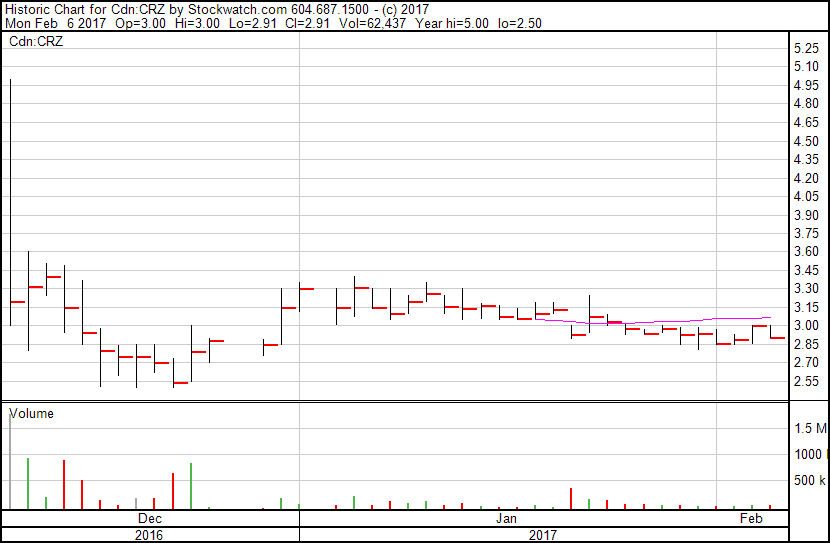 CannaRoyalty, which invests in royalty agreements, equity, secured convertible debt and licensing agreements, has deployed much of the capital it has raised. This chart, which describes CannaRoyalty’s assets, appeared in the the recent CSE Listing Statement and is already a bit outdated, but it gives a sense of the breadth of the company: 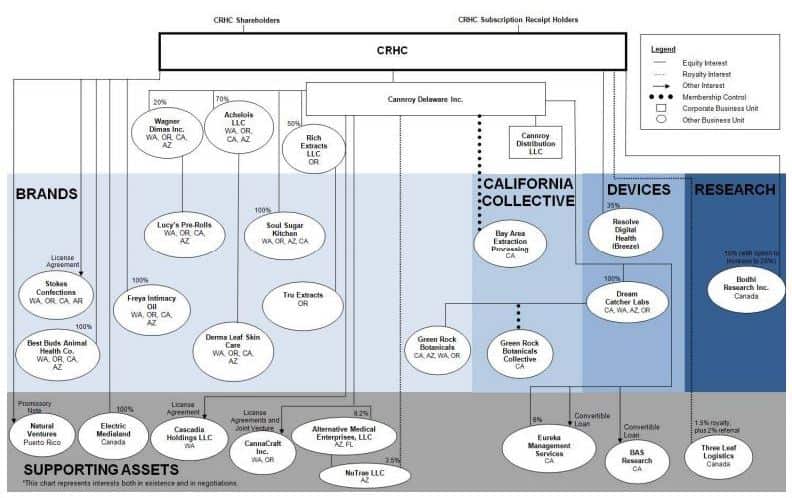 CannaRoyalty characterizes its investments, which have been primarily in the United States, by categories that include research, devices, brands and strategic investments. Despite its short history, it has invested in, partnered with or acquired over two dozen companies.  While many of the deals are with start-ups, CannaRoyalty has a stake in some established and well-known companies, including Eureka Group Holdings, which provides management services to Oakland’s Magnolia Wellness, and a licensing agreement with AbsoluteXtracts and Care by Design to extend the brands from California to Washington and Canada. The corporate website and the CSE Filing Statement  provide extensive detail on each of the investments to date.

CEO Marc Lustig, who brings an extensive capital markets background, has surrounded himself with a team of experts who serve as executives, directors or advisors. As he is creating  a broad and diverse portfolio, he sees a lot of potential synergy among the holdings, creating a potential benefit to investors of better returns than simply the returns from investing in a broad portfolio of assets.

Lustig will be participating in a panel at the International Cannabis Business Conference in San Francisco on February 17th. Chuck Rifici, who serves as a Director at CannaRoyalty, will moderate the panel “Public Market Financing and Cannabis Stocks”, where Lustig will be joined by Terry Booth of Aurora Cannabis (TSXV: ACB) (OTC: ACBFF) and John Fowler of Supreme Pharma (CSE: SL) (OTC: SPRWF) to  examine go-public strategies and pros and cons of specific Exchanges for companies considering a public market financing strategy. These three executives have collectively raised close to C$200mm over the past year and likely have some great ideas to share.

Access to capital is a competitive advantage for companies like CannaRoyalty, which is deploying capital into the capital-starved U.S. cannabis industry as well as into ancillary Canadian companies. The companies in which it invests receive not only capital but also strategic consulting and other resources provided by the ecosystem that CannaRoyalty is building. The recent success of CannaRoyalty and several other Canadian companies that have been raising capital to deploy into the U.S. cannabis industry is an important industry trend to follow.