Consolidated financial results include the accounts of the Company and its wholly‑owned subsidiaries which include Tweed Inc. (“Tweed”), Tweed Farms Inc. (“Tweed Farms”), and Bedrocan Canada Inc. (“Bedrocan Canada”) and its investments in affiliates.

“The third quarter provided new opportunities and challenges for our business, with demand largely exceeding supply throughout the quarter,” said Bruce Linton, Chairman & CEO. “A function of our growing patient base, the time required to move from a record harvest to sale, and an extensive phenotyping exercise to establish breeding stock and further elevate our product offering all resulted in constrained product available for sale during the quarter. The successful late-quarter harvest of the Tweed Farms facility running at full capacity has begun to ease supply constraints while at the same time we have introduced a new diversity of product into our online store under the Tweed, Leafs By Snoop and DNA Genetics banners, driving strong sales this month.”

Added Linton, “We continued to push the boundaries of our business during the quarter through multiple strategic accomplishments that will help drive our future growth. We worked to strengthen our market position in Canada with our move to acquire Mettrum and the acquisition of Vert Cannabis to establish a unique brand presence in Quebec. We also established a base of operations in Germany, a strategic future market for Canopy, with the purchase of cannabis distributor, MedCann GMBH.”

General and Administrative (“G&A”) expenses in the third quarter fiscal 2017 and 2016 were $4.0 million and $2.0 million, respectively. G&A expenses, as a percentage of revenue, continued a downward trend, decreasing from 56% in the third quarter fiscal 2016 to 42% of revenue in the third quarter fiscal 2017. Year-to-date, G&A expenses in were $10.9 million or 43% or revenue. In comparison, G&A expenses were $5.6 million or 73% of revenue, in the same period last year. The increase in G&A expenses over the nine months ended December 31, 2016 reflects the Company’s growth and building of commercial capacity and capability. These costs include a full nine months of Bedrocan operations, amounting to an increase of $1.5 million over the prior year period, fees related to the Company’s graduation to the TSX in the amount of $0.4 million, higher audit and professional services fees of $0.3 million, and higher finance charges such as credit card payment processing fees of $0.3 million due to increased sales activity. G&A expenses during the nine-months ended December 31, 2016 also included higher employee compensation related expenses due to increased staff levels, one-time employee compensation related expenses, and extensive use of consultants, legal and advisory services in merger and acquisition activities and in expanding and commercializing the Company’s operations and facility costs at Tweed, Tweed Farms and Bedrocan. In addition, compliance costs associated with meeting Health Canada requirements, as well as other public company related expenses including related professional fees were included.

The Company’s “Adjusted EBITDA”2 is a Non-GAAP metric used by management which is Income (loss) from operations, as reported, before interest, tax, and adjusted for removing other non-cash items, including the stock based compensation expense, depreciation, and the non-cash effects of accounting for biological assets and inventories, and further adjusted to remove acquisition related costs. Management believes Adjusted EBITDA is a useful financial metric to assess its operating performance on a cash basis before the impact of non-cash items and acquisition activities.

Note 2: The Adjusted EBITDA is a non-GAAP financial measure that does not have any standardized meaning prescribed by IFRS and may not be comparable to similar measures presented by other companies. The Adjusted EBITDA is reconciled and explained in Management’s Discussion & Analysis under “Adjusted EBITDA (Non-GAAP Measure)”, a copy of which has been filed today on www.sedar.com.

Canopy Growth will host a conference call and audio webcast with Bruce Linton, CEO and Tim Saunders, CFO at 8:30 AM Eastern Time today. 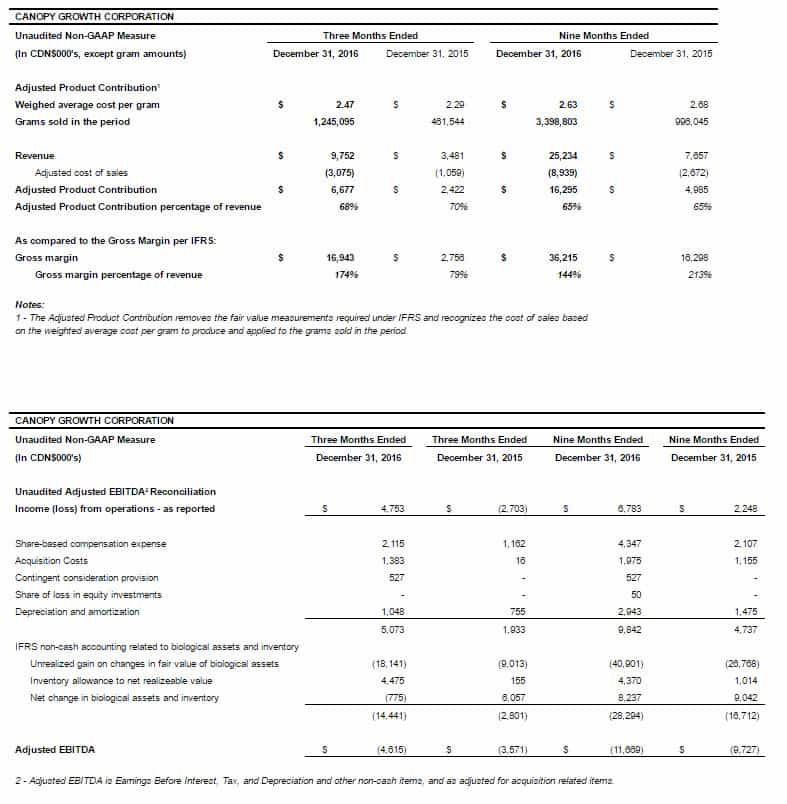