SMITHS FALLS, ON , Feb. 25, 2016 /CNW/ – Canopy Growth Corporation (“Canopy Growth” or “the Company”) (CGC.V) today released its financial results for the third quarter of fiscal year 2016 ended December 31, 2015 .  All financial information in this press release is reported in Canadian dollars, unless otherwise indicated.

Added Linton, “The intent from day one has been to build a scale of production and brands that would be of value in medical and possibly non-medical markets, for when the time came.  We are increasing our focus on brand clarity and market segmentation for Bedrocan and Tweed.”

The Company’s “Adjusted Product Contribution”1 is a Non-GAAP metric used by management which adjusts the reported gross margin by excluding the fair value measurements as required by IFRS and measures the cost of sales for the grams actually sold in the period. Management believes this measure provides useful information as it reflects the gross margin based on the Company’s weighted average cost per gram from seed to sale against the grams sold.  The resulting Adjusted Product Contribution is $2 .4 million, or 70% of sales, in the third quarter ended December 31, 2015 and $5 .0 million, or 65% of sales, on a year to date basis to December 31 , 2015.

General and Administrative (“G&A”) expenses were $2.0 million in the three-month period ended December 31, 2015 compared to $1.0 million in the comparison period ended December 31, 2014 . The increase in G&A reflects the Company’s growth from the early start-up of last year, building commercial capacity and capability as a public company and meeting all compliance requirements with Health Canada.

At December 31, 2015 , the Company’s cash, comprised of cash and cash equivalents totaled $19.7 million , representing a decrease of $1.7 million from March 31, 2015 . The decrease is attributable to net proceeds from financings, including the “bought deal” common share offering in Q3 and the exercise of warrants and options, together totaling $20.6 million , primarily offset by $2.1 million used to repay a loan, $11.1 million used to fund operations, and investments in facility enhancements totaling $10 million .  Investments in facility enhancements include the build out of our Tweed Farms facility and the installation of equipment in our Tweed facility, in part required for the production of cannabis oil extracts.

Bedrocan Canada (“Bedrocan”) took an important step to making medical cannabis more affordable for all Canadian patients with a new price structure called True Compassionate Pricing. Under True Compassionate Pricing, all six cannabis varieties produced by Bedrocan Canada are priced at $5 per gram, making it the most affordable product line in Canada. Many Canadians who medicate with cannabis are doing so because traditional pharmaceutical drugs have not been as effective at treating their symptoms or have undesirable side effects. The decision to consume medical cannabis is made more complex due to the cost of the medicine.

Bedrocan’s production methods have been refined over two decades to maximize yield and eliminate genetic variance from harvest  to harvest. As a result, Bedrocan is able to produce standardized varieties efficiently. With Bedrocan’s facility operating at full capacity, Bedrocan is in a position to offer standardized varieties at a much lower price.

Sales of 10:1 Cannabis OilsTM launched
On February 24, 2016 , Tweed announced that the company had launched the sale of high‑quality 10:1 Cannabis Oils made with GMO-free, organic sunflower oil. Starting with oils made from single strains and slowly introducing high-quality oil products, Tweed’s product line will meet the needs of Canadians managing a variety of symptoms. Starting with popular offerings of Argyle, Princeton and Birds Eye, Tweed will introduce new strain-specific 10:1 Cannabis Oils on an ongoing basis.  The new product line, 10:1 Cannabis Oils, will be sold in 100ml bottles equivalent to 10 dried grams of the same dried flower. Each 10 ml will contain the equivalent of 1 gram of the corresponding Tweed dried-flower variety. Creating a universal equivalency factor between flower and oil is a logical and simple way to ensure that Tweed customers can manage their dosing confidently.  Tweed chose to balance 10:1 Cannabis Oils with organic, non-genetically modified sunflower oil because it is versatile enough to cook or bake with, hypoallergenic, and even good to ingest on its own.

On February 24, 2016 , the Federal Court released its decision in the case of Allard et al v. Canada. This case began as a result of the government’s decision to repeal the Marihuana Medical Access Regulations (“MMAR”) and enact the Marihuana for Medical Purposes Regulations (“MMPR”).  This change overhauled the way that the government provides access to medical cannabis for patients across the country. The plaintiffs in the Allard case argued that the MMPR violates their Charter rights and the court, in a lengthy and detailed judgment, agreed with the plaintiffs and gave the government six months to amend the MMPR.  Canopy Growth’s preliminary interpretation of the decision is as follows: i) the decision reaffirms the right of Canadians to access marijuana for medical purposes; ii) the decision stipulates that the MMPR, under which Canopy Growth subsidiaries Tweed, Tweed Farms and Bedrocan Canada are licensed producers, does not provide sufficient access to cannabis; iii) the decision gives the Canadian Federal Government a period of six months to determine how existing regulations should be amended to ensure that patients have the access to medical marijuana that they need; and iv) the current MMPR regulations remain in force.  Based on this preliminary interpretation, management does not believe the Allard decision will materially impact Canopy Growth.

Canopy Growth will host a conference call with Bruce Linton , CEO and Tim Saunders , CFO at 8:30 AM Eastern Time on February 25, 2016 . 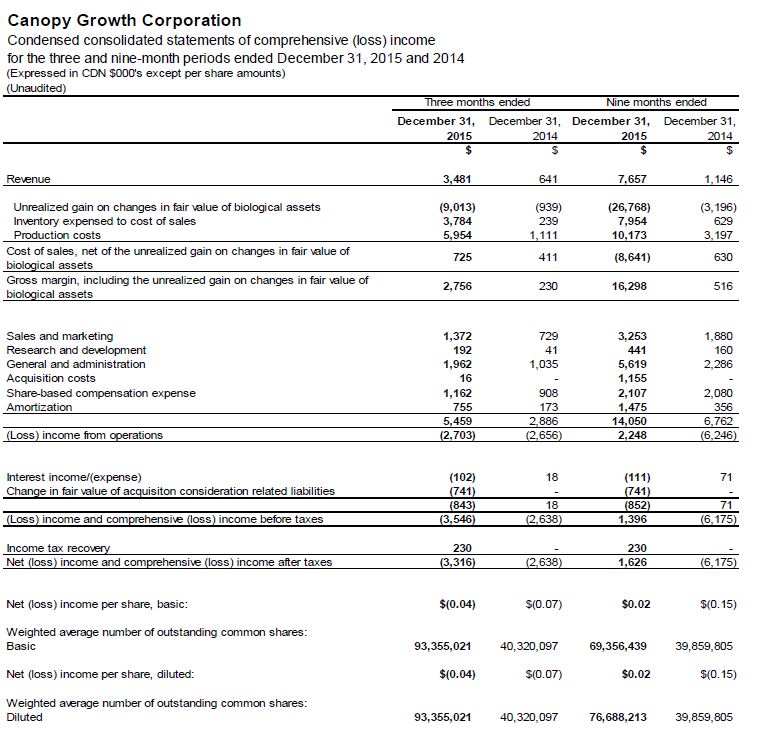 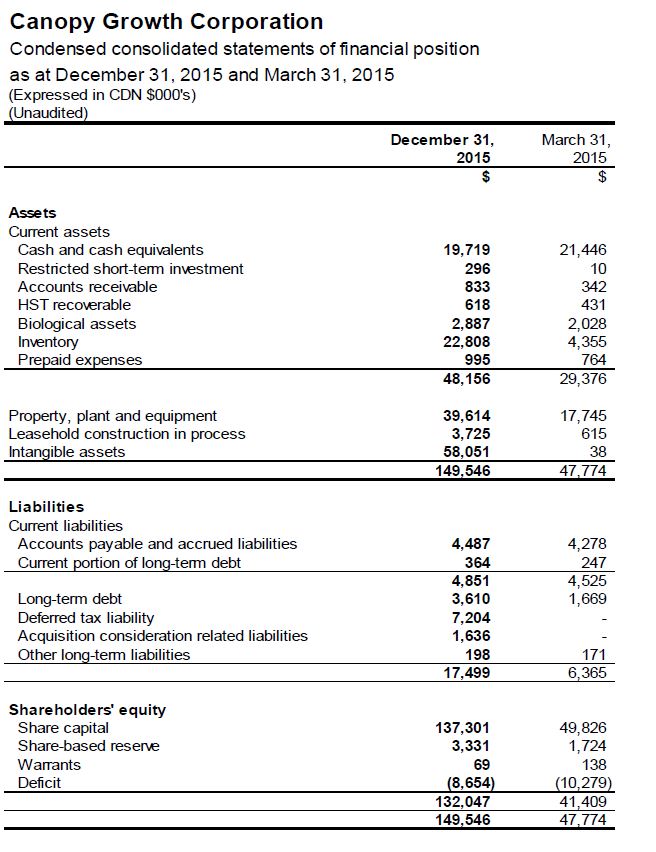 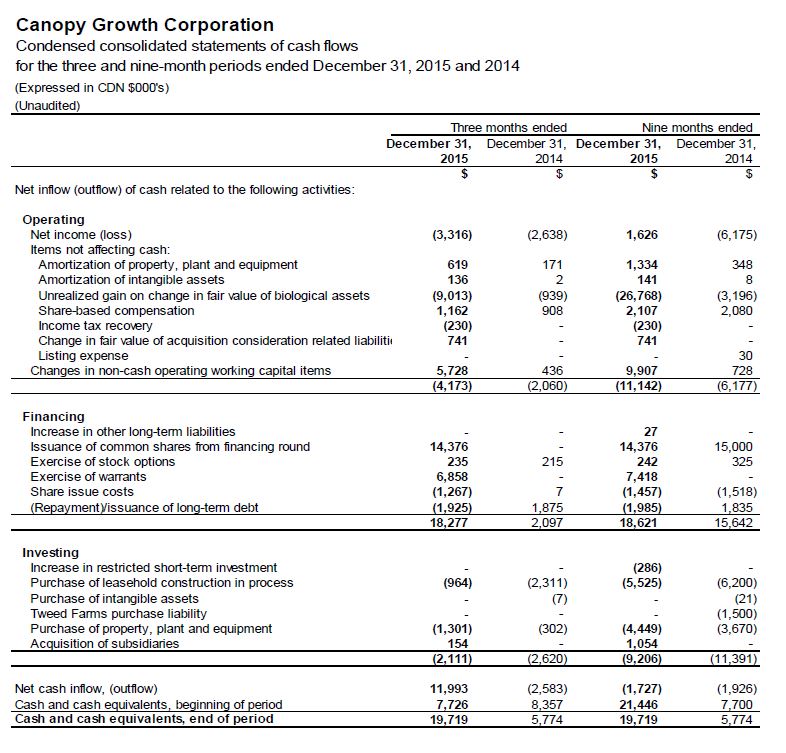