Three months after announcing it was acquiring Canadian licensed cannabis producer Hydropothecary, Canadian Cannabis Corp (OTC: CCAN), according to unconfirmed sources, will not be closing the deal.  CCAN is an Ontario-based company incorporated in Delaware.  Hydropothecary, based in Gatineau, is the sole cannabis producer approved by Health Canada operating in Quebec.  The company has a high-end focus, offering four premium brands at $15 per gram.

CCAN had suggested on October 20th that it would pay $6mm in cash as part of a transaction valued at $21.3mm at the time.  The bulk of the deal was in stock, which has declined modestly since the transaction was announced: 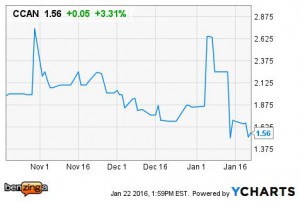 CCAN is delinquent on its SEC filings, failing to file any quarterly filings in 2015 after posting the 2014 annual filing in October, six months after it was due. The company had detailed the transaction’s terms in an 8-K filing on October 20th. The Letter of Intent had been scheduled to become definitive by October 31st with the cash paid by January 15th, but CCAN never provided an update to its shareholders.